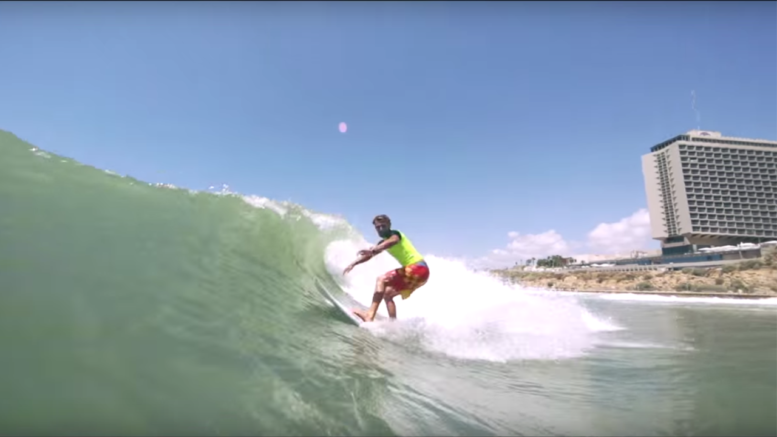 ”Israel wasn’t what I expected…“ so begins the article in Stab magazine, continuing “…the media that reaches the west about the middle east is almost exclusively negative and regularly violent. But by the end of the week, the first day even, I was blown away by the contrast to my expectations and the reality. Israel felt like one of the safest places I’ve been.“

Stab magazine has a strong focus on high performance surfing – not something normally associated with Israel. But as Duncan Macfarlane writes, “the beach culture and surf froth in Israel blew us away”. The Gudauskas Brothers found this out, and more, last year (see video below).

Surfing culture was brought to Israel in 1956 when Dorian Paskowitz arrived from California with 6 longboards and a dream to see Israel represented at the world championships. Legend has it that Paskowitz found a lifeguard, Shamai “Topsi” Kanzapolski, in Tel Aviv who loved the idea and wanted to learn. Slowly the pair grew a following and in the 1970s Topsi started making boards in Israel. There is now a thriving local industry with shapers, shooters, and core surfing enthusiasts.

Israel’s 300 km of sandy beaches, with warm water, no sharks (called Noah’s by surfers), and the worry of jellyfish for only two weeks in the year are a great place to learn. National Geographic called Tel Aviv “Miami Beach on the Med”. Some stretches of Israel’s shore are good enough to host world events – as Netanya did last year.

Paskowitz realised his dream and now has another – to bring peace through surfing. In 2004, he started Surfing for Peace “that aims to bridge cultural and political barriers between surfers in the Middle East”. Such grassroots initiatives, that bring people together, are so important. May the breaks be ever in their favour.