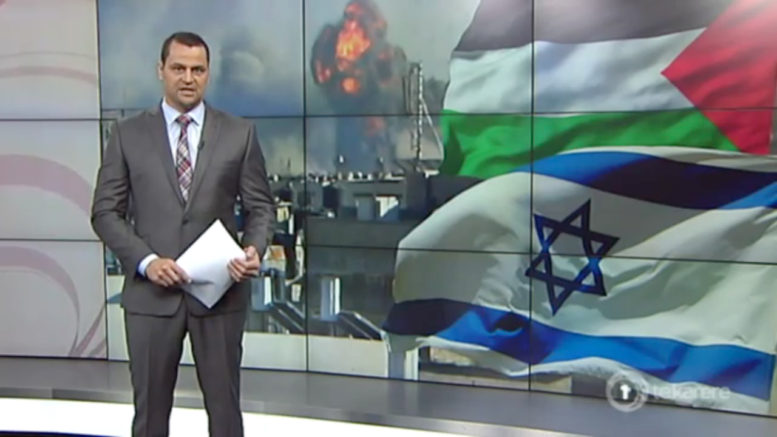 The Broadcasting Standards Authority has upheld a complaint concerning TVNZ’s coverage of the Israeli maritime blockade of Gaza, on the basis that it breached the required standard of accuracy by stating the blockade of Gaza is “illegal”. In doing so it set out some important expectations:

Broadcasters should refrain from making unequivocal statements of fact on issues that are the subject of international dispute, to ensure viewers are not misled. This is particularly so in relation to the Israeli-Palestinian conflict, where a broadcaster’s use of labels and descriptions can have a significant impact on the audience’s understanding, and views on, the conflict.NZ Broadcasting Standards Authority Ruling 2016-087

In September 2016, Green Party MP Marama Davidson participated in the “Women’s Peace Boat” to Gaza, whose purported aim was to break the blockade and highlight Gaza’s humanitarian issues. Ms Davidson and her Kia Ora Gaza-facilitated mission was covered on at least three occasions by Te Karere, a Maori language news and current affairs programme broadcast by New Zealand’s state-owned television broadcaster TVNZ. Her subsequent detention by Israel, in anticipation of which Ms Davidson had pre-recorded an emotionally-charged statement about the “Israeli oppression forces” taking the group “hostage” and “kidnapping” it, garnered political reactions and extensive media attention.

Juliet Moses complained to the Broadcasting Standards Authority (BSA) that the first and second items aired by Te Karere breached the standards of “balance” and “accuracy”. There were no views expressed in either broadcast contrary to Ms Davidson’s and the Green Party position. Further, Te Karere reported on “the illegal blockade of Gaza” and referred to Gaza as being a “daily war zone”, with unexplained wallpaper footage of buildings being bombed.

On the basis that the third item – broadcast 19 days after the first and 5 days after the second – was deemed to be within the period of current interest and provided a pro-Israel viewpoint for some of the report, the balance complaint was not upheld by the BSA. However, the BSA upheld the accuracy complaint, because the legality or otherwise of the blockade was a material point of fact and “it was misleading for the reporter to assert that the blockade was “illegal”, without explaining that this was in dispute, or referring to a source for this assertion”.

The BSA referred to the “Palmer report”, prepared for the UN Secretary General and authored by Sir Geoffrey Palmer. After months of examination of the laws of blockade the Panel deemed Israel’s naval blockade of Gaza legal and a necessary step to protect its citizens from the onslaught of rocket attacks from Gaza:

Israel faces a real threat to its security from militant groups in Gaza. The naval blockade was imposed as a legitimate security measure in order to prevent weapons from entering Gaza by sea and its implementation complied with the requirements of international law.Geoffrey Palmer Report to the UN

The complainant submitted that this was the leading authority on the issue.

However, the BSA also cited a UN Human Rights Council report, in respect of which TVNZ purported to justify its reporter’s statement that the blockade is illegal. The portfolios of this “group of independent UN experts”, as described by TVNZ, were one relating to human rights in the “occupied Palestinian territory”, one relating to food, one relating to physical and mental health, and one relating to safe drinking water and sanitation. On the basis that the terms of this inquiry were “clearly prejudicial”, Israel refused to cooperate with the investigation. Palmer also chose not to engage with it.

In her reply, the complainant submitted that

The BSA concluded that “more care ought to have been taken to accurately describe a contentious issue” and that:

Where there are conflicting views on international issues broadcasters should take care to highlight where there is debate or contention to avoid viewers being misled by statements asserting that either position is definitively correct. In relation to the Israeli-Palestinian conflict, precision is important when making statements of fact.NZ Broadcasting Standards Authority Ruling 2016-087

This is a rare victory. Either through incompetence, a lack of research, or deliberately, TVNZ advocated a particular perspective and became the mouthpiece for one side of an “ongoing, controversial issue which is fraught and complex”, and the BSA found that in doing so it had failed to meet the standard required of it.

While the BSA did not make any order, the decision sets out clear guidelines for broadcasters reporting on the Israeli-Palestinian conflict, that all broadcasters should take note of, and that potentially have far-reaching implications, such as when discussing the legality or otherwise of settlements. Broadcasters must take care to avoid misleading the audience. Precise language is required. Where matters are disputed or contentious, that should be highlighted; unequivocal statements of fact should be avoided. We encourage our readers to continue to hold broadcasters to account, and expect them to act responsibly and objectively.