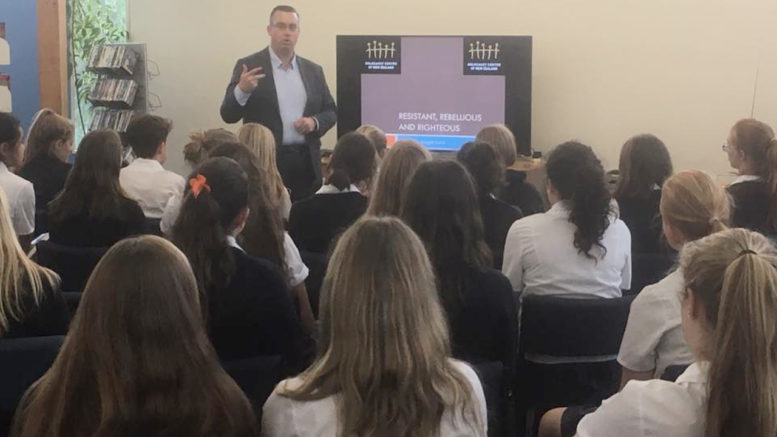 Nelson students have been part of a new humanity education outreach programme that aims to reach regional centres in the South Island.

Last week, members from the Holocaust Centre of New Zealand visited Nelson College, Nelson College for Girls and Nayland College to help students understand the history of the systematic persecution and killings of Jewish people under the Nazi regime.

The lessons were coupled with human-interest stories in order to inspire empathy and empower the 350 attending students from years 9 to 13 against prejudice. It touched on the importance of diversity, human rights, tolerance and acceptance of others.

They’re the ones who are going to take it through to the future,” he said. “If they can learn these things now and stand up for themselves, and others, then it can only be beneficial in the long term.

In the world where we see an increase in xenophobia and hate crimes against others, we believe that these discussions we have with students and teachers are of benefit to them.”Chris Harris

Harris said the story touched students. He said they were attentive and keen to learn how they could continue to help make a difference.

Examples of resistance against the Holocaust were given to the students to inspire and help them appreciate how one person could make a difference.

Someone like Irena Sendler, a nurse. She saved 1200 Jewish children and it was done by a selfless act of smuggling them out in carriages and putting children into false bottomed tool boxes… Those people who are righteous among nations, if they had sat down and thought they were only an individual and couldn’t do anything, then the atrocities would have been a lot worse.”Chris Harris

Harris said some students made parallels between current issues and those in history but were inspired by their learnings to make a change.

The Holocaust Centre of New Zealand plans to spread its outreach project across the South Island and is now working on building a programme for schools in the North Island.