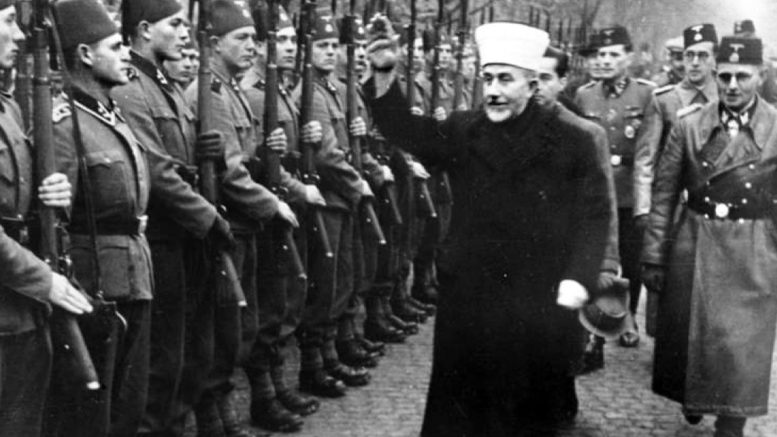 I remember the day when, as a child, I walked into an elevator with my sister and parents, and as the doors were closing, my sister decided to test out whether the doors would open up if she stuck her arm through them. They didn’t. There was a moment of panic as my parents and I tried to prise the doors apart with all the might we could muster.

This is what it feels like right now to be Jewish. The doors are closing in on us from the right and the left. As I see it, we have to stand in between them, grit our teeth and hold them as far apart as possible.

The conflagration in Charlottesville last month seemed to let off a flare for many people, a signifier of all that is wrong with President Trump, with the United States, with the western world. As horrifying as it was to see white supremacists brazenly marching through a major city in the United States, chanting “blood and soil” and “Jews will not replace us”, I wasn’t surprised.

Jews are always the canary in the coalmine.

We have been feeling the brunt of the frightening rise of antisemitism for many years and the harbingers have been there for those looking out. Far right parties in Europe gaining popularity.  Louis Theroux’ famous 2003 documentary on neo-Nazis in the USA. In New Zealand where I live, Jewish graveyards and election billboards of a Jewish-born politician defaced with swastikas.

Anyone active in social media knows that it is a cesspool of antisemitism. Last year Microsoft had to de-activate its twitter-bot, which learned how to interact online, because within 24 hours it had become a Hitler-loving racist.  I long since stopped raising an eyebrow when I read comments on Facebook saying Hitler should have finished the job, or that Jews control all the world’s banks and media.

But antisemitism is not the sole preserve of white supremacists, neo Nazis and the alt-right.

Antisemitism is endemic in much of the Muslim world. Mainstream Arab culture promotes antisemitism through schools, literature, media, popular culture and official ideology. Mein Kampf is a perennial bestseller.  These beliefs have been exported to the West, as gruesomely exemplified in the terrorist attacks on a kosher shop in Paris and a Jewish museum in Brussels. In New Zealand last year, a Muslim cleric was filmed preaching that Jews are the enemy of Muslims and they think that their protocol is to rule the entire world.

And that brings us to the left. Antisemites sometimes say that Jews are shape-shifting, but it is antisemitism that shapeshifts. The purveyors of the new form of antisemitism, on the left, are more discerning than those on the right. You won’t hear them denying or praising the Holocaust or calling for another genocide of the Jews, but you are more likely to hear them accusing Israel of genocide. They will almost always say something like ‘what the Nazis did to the Jews was horrific, but now Israel is acting like the Nazis’.

Their antisemitism is draped in a very thin cloak of human rights and justice. It’s like a warped version of the emperor’s new clothes – at first sight the outward appearance is beautiful, but something doesn’t smell right, and underneath there is very dirty underwear.

And to deny any of this is antisemitism is at best delusional and at worst dishonest.

What would Orwell make of “progressives” who lionise Jew-killing terrorists like Rasmea Odeh and sharia law advocates like Linda Sarsour, whose values should be the antithesis of those of real progessives, while accusing Jews of being white supremacists and Nazis?

If you condemn antisemitism as a bat to beat your enemies with, and as a shield to provide you cover, but ignore it or give succour to it when ideologically expedient to do so, your claim that you are a committed anti-racist is unconvincing at best.

There has been much debate among Jews since Charlottesville about which antisemites are more dangerous – those on the right or the left. I have my own views, but I’m not sure it really matters. It’s not a zero sum game. They are both dangerous, and can threaten us in different ways, physically, ideologically.  And it is increasingly hard to differentiate the right from the left. So Ken Livingstone, the infamous British Labour politician, rewrites Nazi history and calls Hitler a Zionist. A flier is circulated at the University of Illinois at Chicago advising that “Ending White Privilege Starts With Ending Jewish Privilege”. Jew-haters these days favour a pick and mix approach to their antisemitism.

When it always seems to be about the Jews, it’s never really about the Jews. We will never change or appease those on the fringes. But we must do all we can to ensure that they stay on the fringes, that we fend off the insidious creep, the poisonous seep, into the middle, into rational discourse, into the fair-minded majority, the ignorant, the indifferent. As we bring in the new year we must resolve to stake out the middle ground, push back, and make our voices louder.

By the way, we pulled the doors apart and saved my sister’s arm.