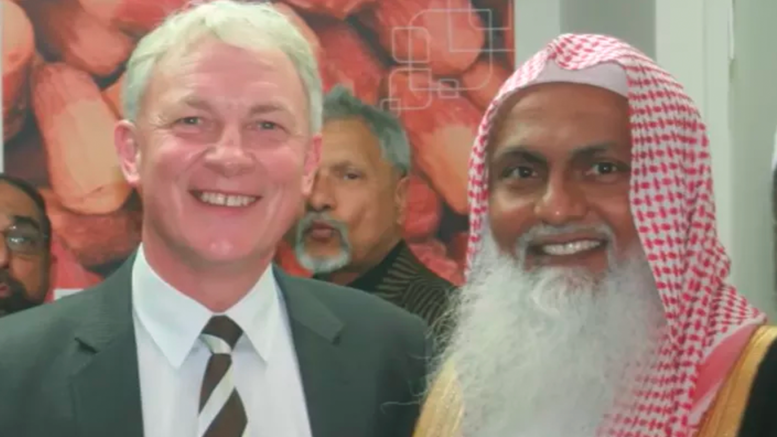 Last month, in a move that attracted much attention and debate, the Mayor of Auckland, Phil Goff, declared that he would not allow Council venues to be used by two controversial Canadian speakers. The speakers, Lauren Southern and Stefan Molyneux, were booked to speak at the Bruce Mason Centre on Auckland’s North Shore on 3 August. In a tweet, Mr Goff stated that “Auckland council venues shouldn’t be used to stir up ethnic or religious tensions“: 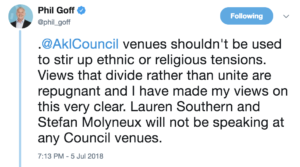 The event was cancelled shortly after that tweet but it has since been shown that the decision was not in fact made by Mr Goff at all, but by the Auckland Council, on the grounds of “safety concerns”. This followed a complaint by the New Zealand Federation of Islam Associations (FIANZ) that Ms Southern would abuse her freedom of speech by insulting Muslims, and threats by “Auckland Peace Action” (APA) to confront the speakers on the streets and blockade the venue.

FIANZ is the organisation in which Sheikh Dr Mohammed Anwar Sahib (pictured with Mayor Goff in the header image, above) held an official role when he was outed for making antisemitic and misogynistic statements in 2016 and subsequently stood down. APA is the same group that endeavoured to derail the Israel Day rally in May with a “wall of sound”, and temporarily interrupted showings of a documentary about David Ben Gurion, the former Israeli Prime Minister, at the Documentary Film Festival in the same month.

Southern and Molyneux have variably been described in mainstream media and on social media as racists, white supremacists, far right, alt right extremists, fascists and neo-Nazis. Others say they are no such thing, and must be able to raise issues about immigration or question Muslim beliefs, for example, without being labelled as such. Still others say that, no matter what their message and how unpalatable it is, unless they are inciting violence in a way that falls foul of the Human Rights Act or some other law of this country, they should have had the right to say it and the Mayor had no right to purport to ban them from Council venues.

Indeed, Council venues are no stranger to controversial speech, including that which could be said to stoke ethnic or religion tension. As just one example, in 2016 Ali Abunimah, Palestinian-American founder of the virulently anti-Israel site Electronic Intifada, spoke at the Auckland Town Hall. Abunimah has called for a third intifada against Israel – thus inciting violence against Israelis – and supports a one-state solution in which he acknowledges “we couldn’t rule out some disastrous situation [for Jews]”. Rather than seeking to shut this down, and in the face of much hostility, pro-Israel members of the audience used question time to challenge him, before being threatened and leaving in a hurry.

The Mayor’s grandiloquent statements raise questions about just what he considers to be speech or actions that stir up ethnic or religious tensions. In June the Islamic Ahlulbayt Foundation of New Zealand staged a rally in Aotea Square in support of Hezbollah. Hezbollah is an Iranian-backed terrorist group, whose military wing is a proscribed organisation in New Zealand, and which is committed to the genocide of Jews. Aotea Square is a public space in central Auckland, right next to the Mayoral office. This follows an anti-Israel protest at Aotea Square last year, when a man wore a t-shirt with a Hezbollah flag on it.

The New Zealand Jewish Council wrote to Mr Goff on both occasions to express its concerns about this public show of support for Hezbollah, and in the second letter, following his statement about the Canadian pair, to ask him if he will make a similar statement condemning Hezbollah.

In reply to the letter regarding the t-shirt incident, Mr Goff said that “My views on anti-Semitism are very clear. I am unequivocally opposed to it. Diversity is Auckland’s strength and we are all working to ensure a strong, equitable and inclusive Auckland with opportunities for all.”

The second letter, following the controversy around the Canadians, said:

“As I have said, there is no place for anti-semitism or indeed any form of racism in Auckland. I condemn the making of anti-semitic remarks by Hezbollah and respect the legitimate concerns of our Jewish community.
The Southern and Molyneux event, about which I tweeted, took place in a council-owned venue rather than a public place and was cancelled by Regional Facilities Auckland due to safety and security concerns.
As I have said publicly, among the comments I found most offensive from Southern and Molyneux were that Hitler was just a social justice warrior and he was provoked into killing Jews because communist Jews in Russia had killed Christians.”Phil Goff

As has become apparent in relation to the antisemitism crisis surrounding Jeremy Corbyn and the UK Labour Party, abstract words condemning antisemitism (“I am unequivocally opposed to it”, “there is no place for [it]”), saying you “respect the legitimate concerns” of the Jewish community, and extolling the virtues of diversity and inclusiveness, by themselves mean nothing. They are mealy-mouthed words without substance and without action, meant to obfuscate. A strong leader who truly cares about the fears and security of the Jewish community, should be prepared to publicly condemn and take action against specific incidents of antisemitism that the community expresses concern about. Such a leader does not try to prove his credentials by condemning statements by visitors to this country, while failing to properly address Jewish community concerns raised with him about another matter, because that suits his agenda and narrative. Such a leader has the moral clarity and fibre to not just condemn the “making of anti-Semitic remarks of Hezbollah”, but the brazen support in the public square of a terrorist organisation whose very ideology and purpose is genocidal antisemitism.

The hypocrisy and ideological sympathies of Mr Goff, a man who infamously held hands with Yasser Arafat, could not be more stark. While he makes lofty and some might say admirable statements about his purported refusal to allow Council venues to be used to stir up ethnic or religion tensions and his opposition to the Canadian pair, he has allowed support for a known terror group, Hezbollah, to be flouted in a public space next to his office.