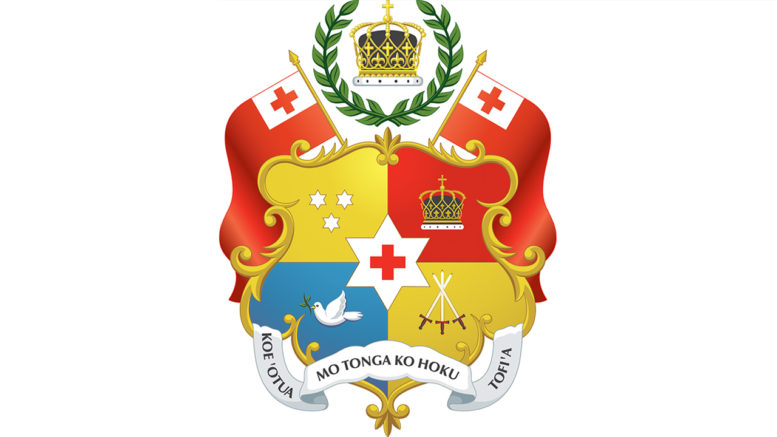 NUKU’ALOFA, Tonga – A brief walk around the capital city of this Pacific Island kingdom alerted me to the fact that this Christian nation has a special reverence for the Jews of the Bible. 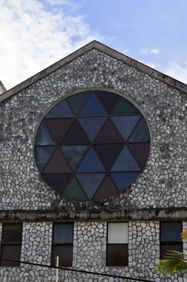 The main Methodist church building—known as the Centenary Church—has a huge window featuring the Star of David.  So too are six-pointed stars important features in Tonga’s royal coat of arms.  And to top if off (so to speak) Tonga’s highest hill is pointedly called Mt. Zion.

Of course, Nancy and I made it a point to walk past the Royal Palace and the Royal Tombs, which are two of the best known sights which tourists may view from a respectful distance.  We were able to inquire, up close,  about these Jewish names and symbols when we visited the administration building of the Free Wesleyan Church (Methodist), adjacent to the FWC’s Centenary Church.  There, we were graciously received by the Reverends Kavamone Fishiihoi and Tevita Tali Mafi, whose responsibilities respectively were internal audit and training ministers. 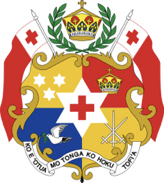 Whereas we might think of “Zion” as a word referring to Jerusalem, or more specifically to the David’s Old City and environs,  the word has a broader meaning in Tonga.  “When we go to church, we say, ‘We’re going to Zion,’” Rev Tali Mafi explained.

Mt. Zion is only 15 meters (49 ¼ feet) high but it is the highest point on the island of Tongatapu, where the capital and port city of Nuku’Alofa (meanng “Abode of Love”)  is located.  Sometimes called Chapel Hill, Mt. Zion was the site of an 18th century Tongan fort and in the 19th century, the first missionary chapel. Today, it is part of the Royal Estate of King Tupou VI, who ascended the throne in March 2012 following the death of his older brother, George Tupou V.  Both rulers were the sons of Tāufaʻahau Tupou IV, who had reigned from 1965 to 2006.

The monarchy was begun by another man named Tāufaʻahau, who, according to Encylopedia Britannica, “was converted to Christianity in 1831 by the Methodist missionaries. He became Tuʿi Kanokupolu and subsequently took the title King George Tupou I in 1845. During the king’s long reign (1845–93), Tonga became a unified and independent country with a modern constitution (1875), legal code, and administrative structure. With Taufaʿahau as its most important convert, Christianity spread rapidly.” 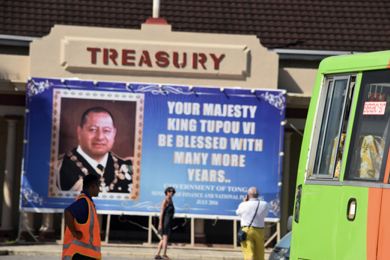 The Centenary Church, with its large stained-glass Magen David window, is “referred to as the Royal Church,” according to an information sheet presented at the wharf by Tongan greeters to passengers of the MS Maasdam.  The large church, capable of seating 2,000 people, was constructed between 1949 and 1952. “While construction was going on the town was divided into sections that shared the feeding of the workers three meals a day,” the printed guide informed.

The two Methodist ministers told us that Tongans sometimes refer to themselves as the “Chosen People of the Pacific,” explaining that in their theology, the Jews of the Bible were the first Chosen people; the British people who became followers of their denomination’s founder, John Wesley, were the second, and the Tongans were the third.  They pointed out that missionaries from Tonga have helped to spread Christianity throughout the island nations of the Pacific Ocean.

Our ship arrived in Tonga on a Monday, which from the standpoint of tourism was very good scheduling, but from the standpoint of learning about Tongans and their religion was a day too late.  The nation literally shuts down on Sundays. I was told that businesses are not open, automobiles and bicycles generally are absent from the streets, and the entire nation—from the king on down—scrupulously observes Sunday as a Sabbath.  Royal watchers like to go to church—or should I say “to Zion” on Sundays – because the king and his family often are in attendance.

The official Tongan guide book, issued by the Ministry of Tourism, cautions those not staying at the resort hotels: “Modest dress is necessary for both Tongans and visitors when attending church.  Visitors are expected to respect Sunday as a day of rest.  Businesses and shops are closed by law allowing Tongan families to spend the day attending church for a relaxed day of worship and feasting.  No flights are scheduled, and business contracts are legally void. Sports activities are not permitted….”

Hebrew Scriptures are well known in Tonga, where the five books of the Torah, in order, are called “Senesi,” “Ekisoto,” “Livitiko,” “Nomipa” and “Teutalonome.”

The Reverends Fishiihoi and Tali Mafi told us that there is considerable interest in translating the Bible from Hebrew directly to Tongan, without the intermediary of English, to learn what biblical concepts and narratives might be better understood.  Reportedly Reverend Dr. Ma’afu Palu has undertaken this assignment.

While practicing Jews are not in evidence in Tonga, this was not always the case.  The writer Michael Horowitz in The Journal of Pacific History reveals that Paul Samuel Bloomfield of Hamburg, Germany, and Lionel Barnet Levin of Bristol, England, settled in Tonga during the 19th century and started families which, by now, have between 200 and 300 descendants each.  So far as we know all the descendants have been assimilated into mainstream Christian Tongan culture or have moved to other locations in the Pacific.

In the 1970’s, one descendant, Papiloa Bloomfield Foliaki, became the first female commoner to serve in Tonga’s legislative assembly.  She resided in the Touliki district of the island of Tongatapu.  A Levin family descendant, Amelia Levin Tu’inukuafe, until 2006 was a “limited partner and general manager of one of the kingdom’s leading shipping firms,” according to Horowitz.

Another Jewish influence on Tonga is the nation of Israel’s Ambassador Itzhak Gerberg, whose New Zealand-based assignment includes the Kingdom of Tonga.  He presented his credentials to King Tupou VI in June, 2017, succeeding Ambassador Yosef Livne.

The Embassy of Israel reported that, “In 2011 a Tongan delegation toured the Hadassah Medical Center in Jerusalem,” and that exports from the Center for International Agricultural Development Cooperation gave a “demonstration on farm and greenhouse technologies.”

The Embassy reported that in 2011 MK Reuven Rivlin—who today is President of Israel – “made a large donation of medical supplies for the treatment of diabetes to the Tongan Ministry of Health.”  The Embassy added that Israel “has given a number of donations through the Insulin for Life charity in effort to improve the availability of insulin to the people of Tonga who cannot afford or access insulin and diabetes supplies.”

Harrison is editor of San Diego Jewish World.  He may be contacted via donald.harrison@sdjewishworld.com

A Māori Samoan’s take on Zionism