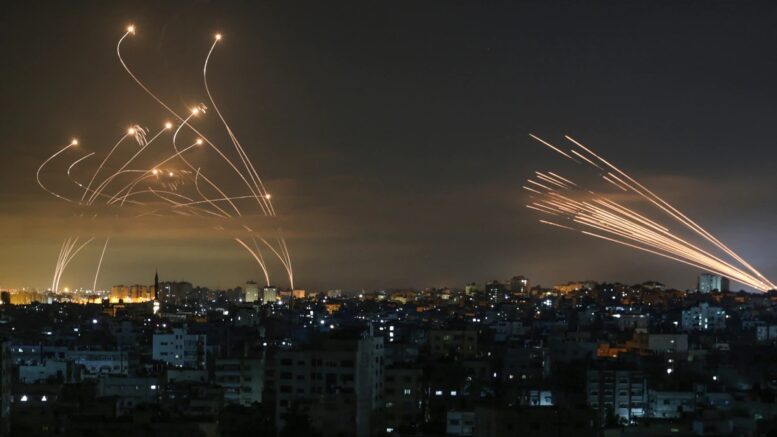 For whatever reason, whenever the conflict between Israel and the Palestinians escalates, passions are ignited in our country on the other side of the world, like for no other foreign issue, and indeed for few domestic issues. Anti-Israel protests are typically mobilised on our streets.

Last weekend, we saw protests in various places in New Zealand. Green MPs proudly shared photos of themselves on social media accompanied by various slogans, but one in particular stood out. It was Ricardo Menendez March’s, with the caption “from the river to the sea, Palestine will be free”.  He put this on Facebook and Twitter, and then his co-leader Marama Davidson retweeted it.

Now, perhaps Mr Menendez March doesn’t have a grasp of Israel’s geography, and to be fair it is pretty hard to find on a map, a sliver one half the size of Canterbury, squeezed in between Egypt, Jordan and Lebanon. But if you look carefully you will find it in between the Mediterranean Sea and the River Jordan, along with the Gaza Strip, a coastal enclave controlled by the Islamist group Hamas, whose military wing is classed as a terrorist organisation by New Zealand, and an area known as the West Bank, which is controlled in part by the Palestinian Authority and in part by Israel.

A two state solution is the official policy position of every main political party in New Zealand, including apparently the Greens, as well as the Jewish Council’s. Gaza and at least part of the West Bank would form the new state of Palestine, in which the Palestinian people would have self-determination, alongside the state of Israel, in which the Jewish people would continue to have self-determination, while guaranteeing the equal rights of all its citizens.

Mr Menendez March and Ms Davidson faced significant backlash on social media for using the slogan, telling them what it meant (even though it should be obvious to them) and how it impacts the Jewish community. They ignored it. The Jewish Council wrote to the Green Party leaders with our concerns. We were also ignored. So much for “centering” minority voices.

Because this “greater Palestine” would be a Muslim-majority state (of which there are already about 50) the most mild possible interpretation of this slogan is that it erases the Jewish people’s right to self-determination. At its most pernicious, it promotes ethnic cleansing and possibly genocide of 7 million Jews.

That meaning is why the slogan, first used by the PLO when it held the position that Israel should not exist, has become a rallying cry for terrorist groups and their sympathisers, including Hamas, whose charter, whose sole purpose, is to destroy Israel and kill Jews everywhere. It is pure sophistry to give it any interpretation beyond its literal, obvious meaning, as the Greens have tried to do by claiming it promotes equal rights for Jews and Palestinians. However, they are welcome to explain to Hamas that this is its true meaning.

Jewish people carry the scars of a world without a Jewish homeland. Israel gives us the means to protect ourselves. It has provided refuge for millions of Jews from a post-Holocaust Europe, Iraq, Iran, the Soviet Union, Yemen, Ethiopia, as well as other minorities fleeing persecution in the Middle East such as Baha’í and homosexuals. Israel provides Jews with a guarantee of Jewish flourishing, a place to develop our peoplehood and culture. Calls to erase Israel are an assault on Jewish history, identity and safety.

Over the weekend, accompanying anti-Israel protests around the world, we saw a huge upsurge in antisemitic attacks. A rabbi was physically assaulted in London, and a convoy of cars drove through Jewish neighbourhoods inciting violence against Jews through a megaphone, prompting warnings for Jews to stay indoors. In Montreal, pro-Israel protestors were attacked with rocks. A Spanish synagogue was graffitied. In Florida a man drove a van emblazoned with “Hitler was right” next to a Palestinian flag. In Germany protestors shouted “Hamas Hamas Jews to the gas”.

The use of the “river to the sea” slogan by Green MPs is one more example in a long line of antisemitism that we have seen on display from their colleague Golriz Ghahraman, who has also made several inaccurate and inflammatory statements recently. These include that there has been “violent displacement” of residents at Sheikh Jarrah that constitutes “ethnic cleansing”, despite the fact that this long-running, complex private land dispute over non-payment of rent has not yet been decided by the Israeli Supreme Court, and the 13 relevant families remain living there.  She has also called Hamas, which is firing 400-500 rockets daily at Israel, has a vast subterranean network and is funded by Iran, an “ad hoc non state actor” and has claimed several times that Hamas rockets can do no real damage, despite causing death and destruction in Israel (and, because about a third of them fall short, in Gaza).

As documented by Amnesty International last year, Hamas oppresses its own people through routinely using torture, repressing dissent, discriminating against women and girls in law and practice, criminalising homosexuality, executing civilians through its military courts, and hiding and firing rockets among civilians. Gazans, as we are now seeing, pay the ultimate price for Hamas’ rocket bombardment of Israel, while Hamas leaders hide in bunkers and in Doha. By all means criticise Israel, but if you are a Hamas apologist, you chant antisemitic slogans, or you resort to lies, you’ve undermined any credibility you may have had as a champion of human rights.

During this devastating conflict, when tensions are high and the Jewish community is experiencing an increase in antisemitism, it is particularly important that MPs, whatever their sympathies and biases, act responsibly, by being factual and avoiding language that incites disharmony and causes fear. That this should need to be said in relation to Green MPs who strongly advocate for harsher laws against hate speech and warn against marginalising minorities, suggests that, against a backdrop of previous antisemitic incidents in their party, there is at best a callous disregard, and at worst a deep toxicity, towards Jewish people.