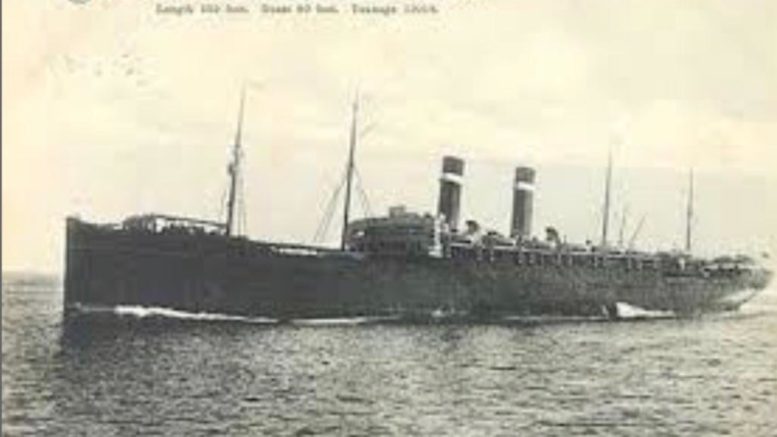 The world moves in mysterious ways. A few days after Robert Bowers ranted online about the Hebrew Immigration Aid Society (HIAS) and went on a shooting spree at a Pittsburgh synagogue, my mother discovered passenger records online relating to her mother’s arrival in the United States as a toddler. We learned she was transported to her new home onboard a ship called Vaderland. Her nationality was listed in the records as “Russian, Hebrew”.

My grandmother and her family fled the Russian pogroms and arrived in Ellis Island in the Upper New York Bay, in 1906. While HIAS now assists refugees of all races and religions, it was established in the late 1800s to assist Jews fleeing pogroms – murderous riots against Jewish people, in Russia and Eastern Europe. In 1904, HIAS began operating out of Ellis Island, which was the United States’ busiest immigration processing centre. I don’t know for sure, but it is likely that HIAS, which I had never heard of until the Pittsburgh massacre, helped my grandmother and her family when they arrived.

When you’re Jewish, apparently unconnected events that occur over oceans, across hundreds of years, even millennia, elide. That’s what it is to be Jewish, to feel connected to people and events unconnected to you in time and/or place, an unbroken line between the liberation of slaves in ancient Egypt and the airlift of Ethiopians in the 1990s and beyond to today. Our shared DNA carries millennia of loss and hope. It is easy as a Jew to feel like a piece of flotsam unmoored on the tide of Jewish history, and whether you sink or wash up on shore is often just a matter of luck of place and time. And so far, I’ve been one of the lucky ones, born in New Zealand in the second half of the 20th century.

My grandmother was certainly lucky too. She was lucky because she and her family were granted refuge in what was, for many Jewish refugees like her, their promised land. Sure, there was discrimination, quotas and the KKK, but relative to what they had experienced, it was a safe haven, offering a prolonged period of peace and prosperity, individual freedoms and opportunity.

The shock of Pittsburgh, the deadliest antisemitic attack in the United States of America, ever, is that American Jews have been reminded in the worst possible way that they are still considered by some to be outsiders. Bowers said that Jews are the enemy of the white people. He thinks they don’t belong in America and that they contaminate those who do.

But it’s not just a tiny white supremacist fringe that considers Jews outsiders.

The leader of UK’s Labour Party, Jeremy Corbyn, and Linda Sarsour, one of the leaders of the US Women’s March, were quick to condemn the Pittsburgh attack, and point out the dangers of white supremacy. Yet they also consider Jews outsiders, except for the tiny minority who don’t support Israel’s right to exist.

Zionists – the overwhelming majority of Jews who believe they have the right to self-determination in their ancestral homeland – have been intimidated out of the UK Labour Party and the Women’s March. To Corbyn, Zionists aren’t truly English because they don’t understand irony, even if they’ve lived in England all their lives. To Sarsour, there’s nothing “creepier” than Zionists and they don’t belong in progressive movements.

While both Corbyn and Sarsour proclaim values of anti-racism and inclusivity, Jewish participation in their movements is contingent on good behaviour – which means the erasure of what for most Jews is a core part of Jewish identity – their attachment to their historic homeland. To pay the price of admission, Jews have to sell their souls.

Anti-Zionists like Corbyn and Sarsour don’t believe the Jewish state should exist. They’re crocodiles shedding tears over dead Jews in Pittsburgh, but they never shed any tears for dead Jews in Israel. They talk about us as if we are outsiders in our own land, are friends with those who would build on top of our ashes there, and support those who erase and appropriate our history. While white supremacists chant “Jews will not replace us”, anti-Zionists chant “free Palestine from the river to the sea”. Despite how Marc Lamont Hill may try to spin it, that is an unambiguous battle-cry to violently replace Jewish self-determination and Jewish life in our homeland.

We have Israel because of Corbyn and Sarsour, and every other person who throughout history has sought to dictate who, what and where we can be, and all the people who continue to think that it is their right to do so. That includes you, Airbnb.

We have Israel because a CNN poll just released under the headline “A Shadow over Europe”, reveals a Europe that, even as the number of Jews on that continent is far off its pre-Holocaust level, is still steeped in antisemitic stereotypes and foreshadows a gloomy future for Jews there, or no future at all.

Meeting people around Israel, it is remarkable how every person seems to have a tale to tell of persecution and escape, if not personally experienced, usually no more than two generations back. It’s an imperfect sanctuary still battling for its people’s survival, but it is home, and it’s the one state where we are truly no longer outsiders and will always be welcome. We are done being homeless, fleeing over oceans on rickety ships in the hope that we might be allowed to try our luck in another foreign land. We don’t depend any longer on the kindness of those who consider us strangers. Israel is where we get to determine, defend and drive our own destiny, and yes, even decide where our capital is. The tide of Jewish history has turned, and we are anchored.