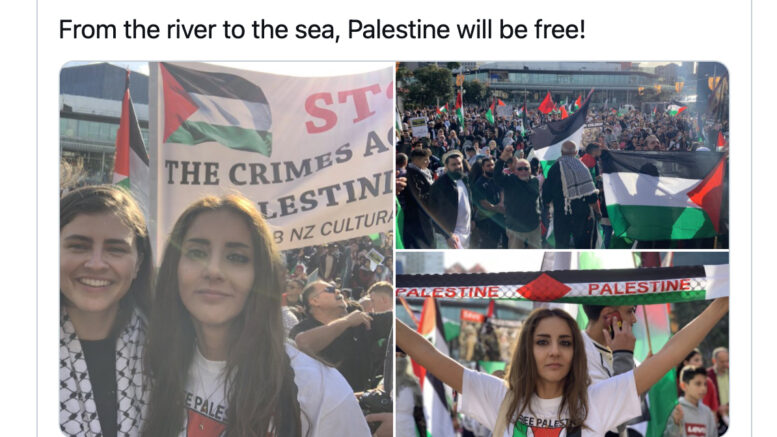 The representative body for New Zealand Jewry condemns the inflammatory comments and inaccurate statements made by two Green MPs in recent days, which risk stoking antisemitism and endangering Jews in New Zealand, as we have seen around the world in the last few days.

Following Saturday’s anti-Israel rally, Green MP Ricardo Menendez March posted on Twitter and Facebook photographs of himself and other Green MPs with the caption “From the river to the sea, Palestine will be free”.

This slogan is used by Hamas, the Islamist group that governs Gaza whose charter calls for the elimination of Israel and murder of Jews everywhere and whose military wing is classed as a terrorist organisation in New Zealand. The slogan is widely understood to be a call for the elimination of the State of Israel, and is considered to be antisemitic. Despite an outcry on social media, Mr Menendez March has not removed the posts, and they have been shared by at least one other MP including co-leader Marama Davidson.

New Zealand Jewish Council President Stephen Goodman said, “Taken at its most mild possible interpretation, this slogan erases the right of Jews to self-determination. At its most pernicious (and in the way intended by Hamas), it promotes genocide and ethnic cleansing.

“It is an outrage that a member of a political party in New Zealand would use this slogan, and that other members of the same party, including its co-leader, would endorse it by retweeting it. It is arguably incitement to violence.”

Separately, Green MP Golriz Ghahraman has made several comments about the conflict that contain such significant errors of fact and serious omissions it should raise questions about her suitability for her role as Green Party Foreign Affairs spokesperson and her credibility. She has referred to the “violent displacement” of residents at Sheikh Jarrah and cited that as a pretext for the conflict, despite the fact that this long-running and complex private land dispute has not yet been decided by the Supreme Court, and the residents remain living there. She has also said several times that the Hamas rockets have been fired at open areas, which is patently incorrect. The rockets have killed Israeli civilians (including children), caused serious damage and significant trauma.

During this devastating conflict, when tensions are high and the Jewish community is bracing itself for an increase in antisemitism, it is particularly important that MPs, whatever their sympathies and biases, act responsibly, by being factual and avoiding language that incites disharmony.

The Green Party failed to respond to the Council’s letter, as requested, within 24 hours.