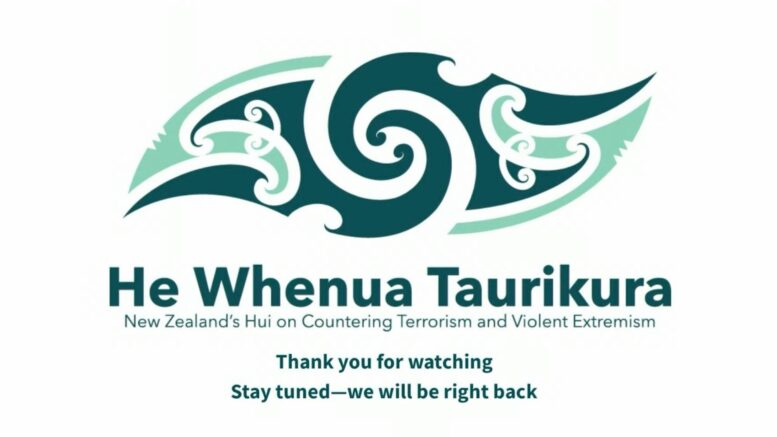 I’m not an academic. I’m the only person on this panel who isn’t an academic. I’m here as a member and spokesperson of a community that faces ongoing threats from a number of sources and ideologies, which we’ve heard about today. I’m also a trustee of the Astor Foundation, a charity that combats religious and racial disharmony and extremism, and seeks to promote social cohesion.

Three things I’ll cover briefly today. Firstly, I’ll make a few general comments on what I think we should aim for as a society. Then how we build the society we want. And then I thought I’d also give some specific examples of some initiatives that I’ve been involved in in those different capacities I just mentioned.

As we’ve heard, there’s no one pathway to extremism or terrorism. I’ve learned quite a bit from reading about Christian Piccolini, who is an American man who is a former neo-nazi, he’s reformed himself, and he does a lot of work in the space now helping to reform other people. He said, extremism is usually motivated by a desire for identity, purpose, and community. Usually there is a sense of isolation, victimhood, and disempowerment. So I think, to counter extremist ideologies we must also offer identity, purpose and community. We must have a collective identity, as a nation, that gives every individual a sense of belonging, inclusion, and empowerment. We must find a vision for the future and build a society that unites us all, while allowing space for difference; in other words, unity, not uniformity. This model of society emphasises, and we’ve heard a lot about this today actually, responsibilities as well as rights. We all have a role to play, and we must all have a role to play, and valid contributions to make, in building the nation we want.

My concern about the current zeitgeist, if you want to call it that, is that it’s building walls, not bridges between people. It focuses on what divides more than what unites, and that brings about segregation, not integration.

I do fear that there is a particular fixation at the moment on “whiteness” as a source of evil. And I think we have to allow, and I understand why that might be, it feel like a form of redress or justice, but I think we need to remember that every person, no matter what their skin colour, no matter what their race, or religion has inherent dignity, and we have to honour them as such. And I think what Sara said before is very important to remember, that Pakeha is an ethnicity in itself. And I say this, by the way, as a person who is not considered to be white by white supremacists, because I’m Jewish.

So how do we build? I think we build, and again this is something that Professor Spoonley just said, from the bottom up and from the top down. It’s a whole of society approach, we must all take responsibility.

So, I’ve got a few specific thoughts on this. I’ve got four points that I think government and agencies need to think about.

The first thing is to consistently model values that they want, show leadership. They have to bring people along slowly. Give them time to get used to new ideas and new ways of doing things, as we’ve heard a lot about today “engender trust and confidence”, but also as someone said, that’s a two-way process, so also put trust and confidence in the public.

We need to hear leaders condemn all support for terrorism and all terrorism equally, whatever the source, target, and circumstances, and even when it is not politically expedient to do so. Hezbollah and Hamas, their military wings, are proscribed terror organisations in New Zealand, but we saw a rally in support of Hezbollah on Queen Street in 2018.

…and just in May, we heard a call at a rally on Queen Street in Auckland, for globalising the Intifada. And the point I want to make here which is very relevant is that I hope we could all agree that there is no place to import…

–[Juliet continues speaking, but content not available in live stream video as it is cut – obtained from Juliet Moses’s Speech notes]–

…violence into New Zealand under the guise of a foreign cause, no matter how worthy we think that cause is.

Communities shouldn’t have to in an ideal world but unfortunately we do need to work to make other New Zealanders not feel fear or mistrust or threatened.

We need to make them aware of our contributions to the country we call home, as we’ve just heard, we need to be normalised, we need to tell our stories; and I think the media also has a part to play with that as well.

But there’s no substitute for meeting others, for face-to-face dialogue, for connection, for, as we heard before, emphatic engagement, discovering shared humanity and values, and alliance-building.

Extremism is based on dehumanising others, and meeting people always, just inherently, humanises others. Going back to Christian Piccolini, before the former neo-Nazi, he said the turning point came for him when he opened a music shop. And people came in, as he later discovered, deliberately to challenge him because they knew he was a neo-Nazi. So, people of colour, Jewish people, gay people, came to challenge him; but they did it compassionately, not aggressively. And he said for the first time he meaningfully interacted with the people who he thought he hated. People treating him with compassion had the most powerful transformative effect on him. And he says, meeting on a fundamental human level is still the most powerful thing that I’ve seen break hate.

So just on a few particular initiatives that I’ve been involved in, I just thought it would be helpful to give a few examples.

Firstly, I’d like to talk about the relationship between the Muslim community and the Jewish community. That’s always been strong, but since the mosque attacks has become stronger, and we’ve worked hard on that and given a lot of support to each other. So some of the things we’ve done, FIANZ and the Jewish Council have put out joint press releases. So for example, last year, we put out one in support of the Uyghur people. We’ve had dinners together, we’ve attended events together –  we were very honoured to have many members of the Muslim community at the UN’s Holocaust Remembrance Day Service in Auckland earlier this year, and then some of us had dinner afterwards – interfaith panels, security coordination. We also, the Jewish community, put together a fund called the Abrahamic Fund, which was to help with the sort of relief and support efforts after the Christchurch attacks, and that came from Jewish communities around the world and here, particularly from the Pittsburgh Jewish community that had itself suffered a white supremacist attack on a synagogue in 2018, in which 11 people were killed.

So, I think it’s really important, just as one example, that we continue working together both because it helps to deal with any extremism within our own communities, but more importantly, because we are stronger together dealing with our common enemy, which is white supremacism and other forms of hate. So, I just want to acknowledge the Muslim community members here today and thank you for that.

Some other examples that I’ve been involved in with the Astor Foundation.

We put on a shared table event, which is an intercultural program aimed at breaking down barriers, stereotypes, and prejudices, which people from all ages and backgrounds come together at to share stories and food from the cultures.

We do this through Auckland University, bringing students together, particularly of Muslim, Christian, and Jewish backgrounds, but other backgrounds as well.

Last year, July last year, a new teaching resource was launched called #Justoneweek, and it so far 375 teachers from 262 Secondary Schools have signed up. It aims to teach about the Holocaust and educate students about the very real impacts of discrimination and antisemitism from that time by sharing the experiences of three survivors who ended up in Aotearoa New Zealand, and that was developed by the Holocaust Centre of New Zealand.

And the third thing that we’re doing is in partnership with the Refugees as Survivors NZ organisation and the Great Potentials Foundation, the Astor Foundation is delivering a mentoring program to secondary school refugee students in South Auckland, both the mentors and the mentees are from refugee backgrounds. The mentees are in year 8 or year 13, and the focus is on increasing their resilience, capability and behaviours, and preparing them as relevant for a transition to tertiary education. And actually, we’ve also got a mentoring program, providing academic support for refugees at the Victoria University of Wellington. Anyway, so those are a few specific examples, and I will finish it there.