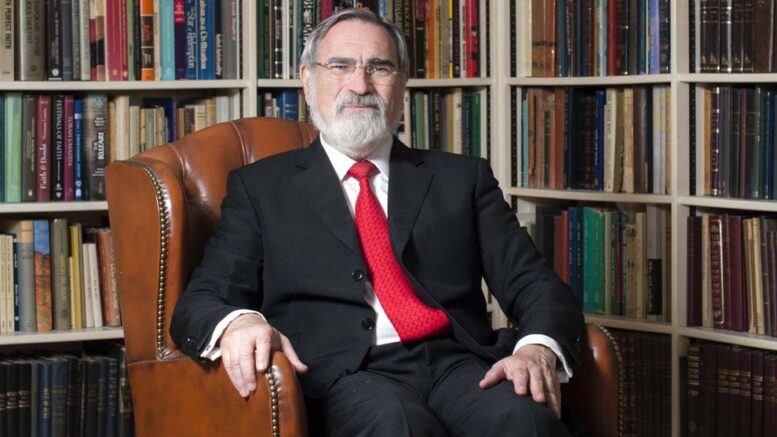 Welcome to everyone. Acknowledge:

Rabbi Lord Jonathan Henry Sacks was the Chief Rabbi of the United Kingdom from 1991-2013. This role made him the most prominent Jewish leader in the United Kingdom for nearly a quarter of a century and more broadly established him as one of the leading voices across the European and international Jewish communities.

Yet these important roles, and the others he held, the CV of the man, do not come near to describing the influence of Rabbi Sacks on the world we live in. Why is it that for gentiles like me and countless others, one of your beloved leaders became a go-to source for wisdom in troubling times? Why is it that he was listened to not only by Orthodox adherents, but by Princes, Popes, Imams, Archbishops, and Prime Ministers over the course of his public life?

The spiritual leader of my own faith tradition, Archbishop Justin Welby addressed this question when he said simply that “we are all the beneficiaries of his wisdom”. That wisdom ran both wide and deep. He spoke and was listened to on topics ranging from war and peace, religious fundamentalism, the relationships between science and religion, the imperative to live a moral life, and many other topics.

My own understanding of Rabbi Sacks and his contribution is centred around his role as a man of letters and in my comments I will focus on a few of his contributions that I think are really worth hearing and reflecting upon.

Firstly, the words of Dr Hava Tirosh-Samuelson on Rabbi Sacks:

“[Sacks’s] vision—informed as it is by the concerns of modern Orthodoxy—is paradoxically one of the most universalizing voices within contemporary Judaism. Sacks possesses a rare ability to hold in delicate balance the universal demands of the modern, multicultural world with the particularism associated with Judaism.”

For those of us who care deeply about the capacity of an increasingly complex world to progress peacefully and who believe in the importance of inter-faith dialogue, this is what I valued the most about Rabbi Sacks’ contribution to public debate. In our multi-layered, multi-faith, multi-cultural world there is an extraordinary tension between on one hand, the mush of extreme post-modernism which pulls us away from the quest to real knowledge, wisdom, and truth, and on the other hand the singular bigotry of those who believe that their tradition and truth at this particular point in time is the only one that should be respected.

Rabbi Sacks pointed to a better way. He was a faithful and adherent Orthodox Jew and based his whole life and teaching on the precepts of his faith, but he was able to hold this in balance for an appreciation of the teachings and traditions of others and the manifold ways in which God reveals himself. He said:

“Faiths are like languages. There are many of them, and they are not reducible to one another. In order to express myself at all, I must acquire a mastery of my own language… But as I venture out into the world I discover that there are other people who have different languages which I must learn if we are to communicate across borders.”

In an increasingly secular world he was also an eloquent voice for centering our lives on moral concerns, not simply the acquisition of things and status. His words again:

‘In the face of a deeply individualistic culture we offer community. Against consumerism, we talk about the things that have value but not a price. Against cynicism, we dare to admire and respect. In the face of fragmenting families, we believe in consecrating relationships.”

This wisdom and ability to pull us back to our shared purpose as human beings was evident throughout his life and career and poignantly was expressed in his very final book “Morality: Restoring the Common Good in Divided Times” which was published earlier this year as Covid began to emerge and threaten the cohesion of societies around the world. He spoke of “Living the We” rather than “Living the I” as a means to tackle this challenge and others in the pursuit of a more just world.

Rabbi Sacks’ teachings had wide reach not only because of his wisdom, but because he knew how to communicate. He was a warm and empathetic human being who knew that his role as a leader was to speak with people in a way that they would understand, and come with him.

None of this meant that he was a shrinking violet. There were controversies in his career and he was as staunch and committed in his condemnation of anti-semitism, as he was in his support for the State of Israel.

A good quick story on his sense of humour. He was great friends with Archbishop George Carey and both were staunch fans of Arsenal football club. He tells the story of a game they attended together:

“That night Arsenal went down to their worst home defeat in 63 years, losing 6-2 to Manchester United. The next day a national paper carried the story in its diary column, and concluded: ‘If the archbishop of Canterbury and the chief rabbi between them cannot bring about a win for Arsenal, does this not finally prove that God does not exist!’ The day after, I sent them the following reply: ‘To the contrary, what it proves is that God exists. It’s just that He supports Manchester United.’”

For those of you who mourn the loss of this great man, here are the words of Rabbi Jonathan Sacks himself on the journey we all face:

“What the parsha is telling us is that for each of us there is a Jordan we will not cross, a promised land we will not enter. ‘It is not for you to complete the task,’”

That may be true, but the contribution of Rabbi Sacks is that through his wisdom we are all better placed to walk the journey of life and death.

Shalom and may he rest in peace.