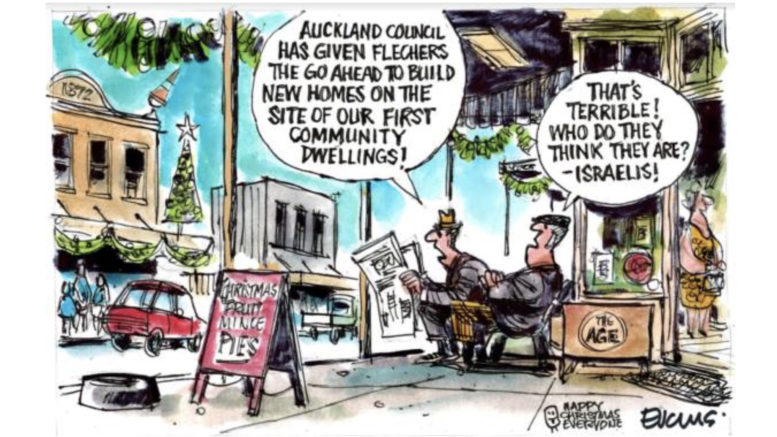 In 2003 cartoonist Malcolm Evans was sacked from the NZ Herald amidst some controversy.  His single-tracked focus on Israel, and the vitriolic and offensive nature of some of his cartoons, had led to accusations of antisemitism. He was warned by his then editor to temper his fixation on Israel but refused, leading to his dismissal.

Since then Evans’s cartoons have received a limited circulation, now mostly through the Northland Age. Although 15 years have passed since he left the NZ Herald, Evans has lost none of his fervent hatred for Israel, Israelis, and, some would argue, Jews (see the gallery of some of his cartoons on Israel, both pre and post 2003, below).

Evans’s cartoons often cast Israelis in a demonic light, taking glee in the slaughter of innocents, and make comparisons between the Israeli government and the world’s most despotic and murderous regimes, including the Nazis and the regime of Syria’s Assad, which has killed over half a million of its own people.  They exonerate Palestinians entirely of any wrongdoing in the conflict, and depict Israelis as bloodthirsty, racist, machiavellian monsters that control US foreign policy. They frequently fall squarely within the widely-adopted International Holocaust Remembrance Alliance working definition of antisemitism.

On Thursday 18 December 2018, the Northland Age published this cartoon:

Bearing no connection to the editorial or any of the stories around it, the cartoon appears to relate to a controversial plan to allow Fletcher Building to build hundreds of homes on land in South Auckland.   The story has no Israel connection whatsoever, but Evans managed to turn it into yet another vehicle to vent his antipathy toward Israelis, and to paint them as uniquely devious and evil.

The target for his disdain was Israel’s citizens, not its government.   One would have thought that in 2018 New Zealand it would be considered unacceptable for a reputable newspaper to publish gross generalisations based on nationality or ethnicity.  Replace “Israeli” with any other nationality, and one would rightly expect an outcry. Why should there be a double standard for citizens of the Jewish State?

When a member of the public expressed her dismay to the Northland Age’s editor about this cartoon, she was told, by way of explanation, that this was the only cartoon they had available that week.  It should cause concern that “attack Israelis” is an apparent back-up plan of the Northland Age, in the absence of anything more newsworthy. We should expect and demand more of our media.