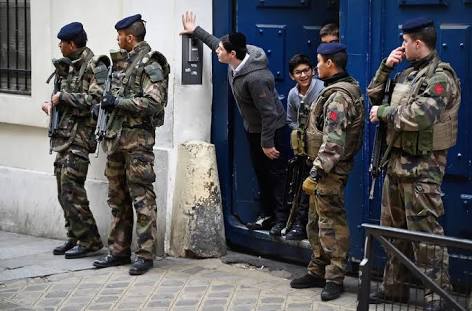 Last Friday, 85 year old Jewish Parisienne and Holocaust survivor, Mireille Knoll, was murdered in her home, allegedly by her neighbour and an accomplice. The attackers stabbed her 11 times and then set her and her apartment on fire. Two men have been arrested for what the authorities are calling an anti-Semitic attack.

Twelve years ago, a young French Jew, Ilan Halimi, was abducted, held for ransom and tortured over a period of three weeks and eventually murdered by a Muslim group calling itself the “Gang of Barbarians”.He was targeted because he was a Jew, although the anti-Semitic nature of the crime was not acknowledged by the authorities.

Eleven years later in Paris, another Halimi, Sarah – a doctor and an orthodox Jew (and a distant relative of Ilan Halimi) – was viciously beaten by her neighbour and eventually thrown to her death out of a third storey window. Police were outside the building as she was being assaulted but failed to intervene. Although the assailant, a Franco-Malian Muslim was overheard shouting “Allahu akhbar” and happened to target the only Jew in the apartment building, authorities were initially reluctant to treat this attack as an anti-Semitic hate crime.

Six years ago, Mohammed Merah, a 23 year old French petty criminal of Algerian descent, drove his motorcyle up to a Jewish school in the city of Toulouse just as children and teachers were arriving. He shot and killed a rabbi and his two young sons outside the school gates, and once inside the school grounds, he chased an eight-year-old girl, the daughter of the school’s head teacher, caught her by the hair and shot her at point black range.

Since 2006 some 40,000 Jews have left France. While the rate of Jewish emigration is currently slowing, rates of anti-Semitic activity, including violent attacks, remain high. In January this year, an eight-year old boy wearing a kipa (skullcap) was attacked as he walked to a tutoring class in a north Paris suburb. A few weeks ago, it was reported that the baby of a French rabbi received burns from acid that was placed in her pram.

There have been numerous stories of Jewish children being beaten by anti-Semitic bullies at public schools. Jewish leaders have claimed that public schools are now unsafe for Jews.

The worsening problem of anti-Semitism in France is mirrored throughout Europe, and the phenomenon has an impact even as far away as New Zealand.

In 2017, Sarah and Emmanuel, with their two young daughters, took the bold step of emigrating from Paris to New Zealand, where they had no family and knew nobody.

Both observant Jews, Sarah and Emmanuel were born and raised in Paris. Over the last 15 or so years, they noticed changes unfolding around them, including in their respective places of work, which they eventually felt impossible to ignore.

As Sarah explains, there had always been some latent anti-Semitism around, but she felt there was a gradual change whereby it became acceptable and normal to make fun of Jews, Jewish customs and beliefs. At the same time, the threat of physical violence became ever more real and proximate.

Sarah and Emmanuel paint a picture of growing antagonism toward Israel – fueled by a hostile media – along with widespread anti-Jewish sentiment among the growing North African immigrant population. This is further inflamed during heightened times of conflict in the Middle East and has contributed to the resurgence of an old-fashioned anti-Semitism which had previously lain relatively dormant throughout French society.

Emmanuel worked as a teacher in a tertiary institution and noticed that, among the students that he taught, students with openly anti-Jewish views went from around 5% of his class, to a point where the vast majority of his students would be comfortable making anti-Semitic comments. As Sarah recalls, the word “Jew” started to be thrown around as a commonplace insult, such as, “Go on, give me some of your sandwich, don’t be a Jew”.

Sarah, who worked in a senior role in a major cosmetics company, made a conscious effort to block out the hurtful discourse and “give the best example of a Jewish person that I can be, because it was really important to not give them one drop of [ammunition].”

“And sometimes you’re just talking with someone and they just drop in some information or one [anti-Semitic remark] and you’re like, seriously, this is what you are thinking? That’s why I blocked it, tried to keep it professional…I said no to coffee invitations. That’s why when I left there were like five people that know where I went. Noone knows where I am.”

At the same time, incidents were happening around them that struck terror, and these were happening with increasing frequency. Emmanuel says, “It was a good life but we were constantly worried, hearing things, very disturbing things about what was going on.

“In Europe Jews are like 0.2% of the population and in France it’s not even 1% and it’s going down. But in 2016 we had something like over 350 anti-Semitic crimes, meaning that one racist [crime] in three was toward Jews.”

Referring to the case of Sarah Halimi, “She was tortured for hours and there were people around…the police were there but they didn’t do anything. The media didn’t want to talk about it. They refused to talk about it.”

Sarah recalls reading about case about an incident in a North Paris suburb where the car belonging to a Jewish woman was defaced, with the words “Jew get out” scrawled into the paintwork with a screwdriver. The police told her to leave the area, as now she had been discovered (as a Jew) she could no longer be protected. “So she packed up, sold her house and left to live somewhere else.”

As Sarah and Emmanuel describe, to exhibit outward signs of Jewish identity in public in France is dangerous and inadvisable. Emmanuel says that he would feel unsafe walking around, or riding on the Metro, wearing a kipa (skullcap). “You would be worried that someone would attack you. People are saying, if you want to be safe, take off whatever shows you are a Jew.”

Emmanuel and Sarah even took the step of changing their family name to a less obviously Jewish one.

The warning signs gradually came closer to home. Sarah recounts, “I lived in a building with 600 apartments, and one evening when I went out of my carpark, there was a big [graffiti] tag with ‘here live 93 Jews’ on it.” Emmanuel noticed a few days later that the word “ok” had later been added. Fearing that someone inside their building is counting the Jews for a malicious purpose, Sarah called the police, and was told that it was nothing, just graffiti. “It was very scary”, Emmanuel recalls. “People don’t think about how vulnerable we are. I mean we are very vulnerable.”

Unsurprisingly, the memory of the horrific events at the Toulouse school haunt Jewish parents throughout France. Emmanuel and Sarah’s daughters attended a Jewish school, and after the terror attack at the Jewish supermarket, daily school drop-offs and pick ups had to be organised with military precision.

“Because it was unsafe to stay on the sidewalk by the school they asked us, say for example, ‘year 1 and year 2, you need to come at between 8.05 and 8.10. From year 3 to year 6 you need to come at 8.10-8.15’. So you have a five-minute window. People would just kiss and say ‘bye – now go inside the school’. I was never able to speak with other mums. It was not safe to stay in front of the school.”

For a time, the school was guarded by military police, the presence of whom Sarah had to explain to her young daughters. “I remember when I was myself a bit tired of this situation [Sarah pauses to regain composure, blinking back tears], I said to the girls, “Be nice to those guys, because they are here to protect us.”

The decision to leave France for New Zealand was not easy. Emmanuel recounts, “Family didn’t believe that we were going to go. Our friends kept telling us that we’re crazy. Because they don’t see the immediate danger. They think, ‘I don’t want to see this, I want to suppress it. I’m staying in my community and I don’t think about what’s happening outside’, but [their] community is getting smaller and smaller.”

Although they tried to keep their decision quiet, their daughters had absorbed more than than they’d realised. Sarah overheard one of her daughters telling a friend, ‘“So anyway we have to say goodbye because we are going to a country where there is no military in front of the Jewish school’. And I just fell apart”.

Starting again from scratch and leaving so much behind was a challenge, but Sarah and Emmanuel have little doubt that the decision they made was the right one for their daughters. As Sarah says, “I don’t know what’s going to be tomorrow but I don’t want to have any regrets and I want to be able to say ‘We did everything that we can to protect you from what could happen’”.

“We will never go back to Paris. I’ve been living in Paris 45 years of my life, I’m very Parisian. I loved every piece of it.”

Before leaving, Sarah made sure to show her daughters the best parts of the Paris that she loved. Fighting back tears, she adds, “I showed them all the beauty of this city just to let them see that… and so that the rest will just be removed from their memory.”

Part of the appeal of New Zealand for Sarah and Emmanuel was its distance from Europe, and from the dangers and fear that they hoped to leave behind.

The contrast to life in Paris has been stark. Sarah recounts how life in Paris involved waking in the morning to the sound of police sirens and going back to sleep at night with the sound of police sirens. “And when I came here and we were on Queen Street, and people [were] crossing the road at Victoria Street and I said, ‘Listen, it is noon, everywhere there are people, but there is no noise. The noise is not from the people but from the birds’.

“I saw people smiling on the street; I saw some kindness to each other, and I thought, this is more who I am deep inside.”