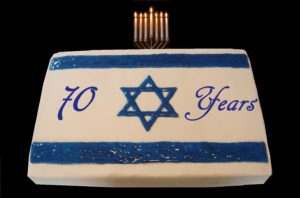 Seventy years ago Hitler’s war against the Jews was no longer raging. The Holocaust had finally been checked. The Crematoria of Auschwitz-Birkenau and of other of Hitler’s extermination centres had been snuffed out. However the furnaces were still smouldering in the hearts of the survivors and the acrid smoke from the chimneys clung to the memory, a stench that no laundromat would be able to remove. Primo Levy, an Italian Jewish author and poet who survived Auschwitz wrote, “We felt that there was nothing we could do to rub out the past and that the scars of the outrage would remain with us forever…nobody has been able to grasp better than us the incurable nature of the offense”. With two-thirds of European Jewry annihilated the question on the minds of many was—“what about the survivors?” The answer would come on the 14th May 1948 when just three years after the fires of extermination had been extinguished a nation would arise from its ashes—the State of Israel.

When the flag of Israel was raised among the nations on that historic day there were around 700,000 Jews living in the new state. The Nazi genocide in Europe had claimed six million of the House of Israel. It left hundreds of thousands of Jewish displaced persons—survivors with barely a family member left and with nowhere to go. The State of Israel would offer a hope and a sanctuary to those who had been decimated.

Hostile nations in the Middle East, some who had supported Hitler’s intentions against the Jews were unwelcoming to this restored Jewish statehood. Because of renewed violence and threats against Jews living in those Arab nations and because of the Jewish refugees in Europe whose hopes were pinned on their ancient homeland, the nascent State of Israel was about to experience a growth spurt.

Within Israel’s declaration of Independence was a promise to every Jew in the world who would ever again face persecution, “The State of Israel will be open for Jewish immigration and for the ingathering of the exiles”. It contained a clause to let the Arab citizens of Israel know that they would be treated fairly, “It will foster the development of the country for the benefit of all…it will guarantee complete equality of social and political rights to all of its inhabitants irrespective of religion, race or sex”. Such declarations, uttered by David Ben-Gurion the first PM, helped shape Israel into the bastion of freedom and democracy she is today—democratic values that all of her critical Arab and Islamic neighbours still have to match.

Despite the misinformation campaign against the Jewish state the fact is that Israel has lived up to its declaration of Independence. Israel is the only true democracy in the Middle East whose values best reflect what we hold dear in the West. The distortion of facts and misinformation put out by Israel’s detractors and swallowed so gullibly by the media at large have made Israel look like the bad guy—this is untrue. Where are the reports on Syrian casualties being treated in Israeli hospitals by caring Israeli doctors and nurses? Or the strenuous attempts taken by the Israel Defence Forces to ensure as much prevention as possible to protect innocents from being targeted in their responses to enemy aggression? Or of the Palestinians crossing into Israel on a daily basis for employment?
Perhaps Israel’s best defence in answer to those detractors are the testimonies of Arabs who are very happy with the State of Israel. One Arab journalist in Israel said, “If I were given the choice, I would rather live in Israel as a second class citizen than as a first class citizen in Cairo, Gaza, Amman or Ramallah.” Ishmael Khaldi, a high-ranking Muslim Arab in the Israeli Foreign Service said, “By any yardstick you choose…Israel’s minorities fare far better than any other country in the Middle East”. An Israeli Arab woman whose son sparked controversy when he spoke out in defence of Israel said regarding the false accusation that Israel is an apartheid state, “Apartheid! That would mean separate buses for Jews and Arabs. Does such a thing exist here? Or segregated coffee shops. Does that exist here? These accusations need to stop. We coexist excellently. Together we will go through ﬁre and water, Arabs and Jews. I reject everything that they say about Israel because I live here and I know what I am talking about. And I say this as an Arab woman, a Muslim and a proud Israeli.” Israel’s critics could sort out their own failings before pointing the finger hypocritically at Israel.

Within three and a half years of its birth, by the end of 1951, the Jewish population of Israel doubled. Many of the Jewish survivors from Europe and the Jewish outcasts from the Middle East found a new hope, a hot meal, a warm bed, open arms and a “Shalom” in the land of their forefathers. As they disembarked at the seaports and airports of Israel it was to the tune of their national anthem, “Our hope has not been exterminated—our two-thousand year old hope to be a free people in our land—the land of Zion and Jerusalem”.

But the new nation was going to be tested and forged in the furnace of affliction as the surrounding nations would mobilise their armies to put a stop to what the U.N. had agreed should happen (UNGA Res. 181). This was Israel’s first test. Could she survive an onslaught by the regular armies of half a dozen nations when she herself was desperately looking for guns to defend herself let alone trained people to use them? If the birth of the State so soon after the massacre in Europe was a miracle, then a second miracle also occurred—a tiny nation still learning how to defend itself managed to stay the hand of a coalition of angry nations who sent their regular armies to destroy her. Six thousand Israelis would pay with their lives in this War of Independence—the first of many defensive wars. The Jewish people had decided that when faced with the odds it was better to lose six thousand fighting for a nation that wanted them, than to lose six million in nations where they were not welcome. Up until this point they had been the victims of vicious circumstances and despots. From now on they would become the victors no matter what the odds. They only had two choices—it was either win or die.

In the Yom Kippur War of October 1973, Israel’s most painful to date, a combined and well organised attack on Israel’s southern and northern fronts by Egypt and Syria (fully backed by the might of the Soviet Union) resulted in the equivalent of all the forces of NATO in Europe attacking Israel at the same time. It was the holiest day of the year for the Jewish State—the day when many in the nation fast. The attack came at 2:00 PM in the afternoon of October 6 as many were in their synagogues praying. The citizens of Israel would desperately replace their religious shawls for battle kits as the greatest artillery bombardments since the Second World War were taking place on both of Israel’s fronts. As Israel reeled under the onslaught in the first few days, Golda Meir the Prime Minister summed up the resolve of a battle weary nation when she addressed the world’s media:

“This People, small as it is, surrounded as it is by enemies, has decided to live. And if we have to pay the price for living, we have to pay it. This is not a people that can give in. And we know that giving in means death, means destruction, of our sovereignty, and physical destruction of our entire people. We will not be destroyed. We dare not be destroyed. Therefore the spirit of our men on the front, the spirit of our people in every home, in every city, in every village, is a spirit of a people who hates war, but knows that in order to live, it must win the war that has been forced upon it”.

Israel recovered from the initial assaults and turned those attacks around. Moshe Dayan, Israel’s Minister of Defence at the time vowed “We’re going to show the Syrians that the road runs from Tel Aviv to Damascus, as well as from Damascus to Tel Aviv.”

The result of Israel’s determination to strongly defend herself is what forced Egypt to the negotiating table in 1977. Israel and Egypt have been at peace for 40 years. The Hashemite Kingdom of Jordan followed with its own Peace Treaty. Others are slowly coming around but others still strive for Israel’s destruction—Iran most vehemently. The Israeli military is indeed a defensive fighting force, but to be credible to those who seek to destroy her she has to be a convincingly strong force. They are not the Israel Offense Forces as one misguided politician once said. Such comments reveal the ignorance of those who should know better particularly if they intend being honest leaders in any nation. Israel seeks peace with her neighbours but she is ready to defend herself at any time.
While the need to defend itself has empowered Israel to confidently say to her enemies “never again”, necessity has also made the Israelis the innovators of some of the world’s greatest inventions. From the nation with little water reserves has come drip irrigation and desalinisation plants—turning salt water into drinking water. Believe it or not they can now make water out of thin air. Other Israeli inventions the world benefits from are the Waze navigation app, the cherry tomato, the electric car grid, the Disk-on-Key, Mobile-Eye, and Intel Israel which has its microprocessors in many of our computers—just to mention a few. Often the negative press around the conflict overrides the accomplishments made by the Jewish State. Despite the challenges she faces Israel will continue to innovate and invent and increase disproportionately the blessing she is to the rest of us—thanks very much Israel.

Israel needs to make no apologies for its ability to survive—not to the U.N, nor to the Arab League, nor to the 57 nations in the Organisation of Islamic Cooperation which holds great sway in the U.N. and results in anti-Israel resolutions. It is incumbent upon all civilised nations not only to applaud the one Jewish state in the world for its ability to survive, but also for being the one bastion of freedom and democracy in the Middle East with innovations that advantage us all.

Despite opposition and hostility, unfair criticism, relentless attempts to discredit her, and the continuing challenge for this ancient people living in its ancient land having to justify its right to exist, there are just three words we will add to the popular Hebrew refrain “Am Yisrael Chai—The People of Israel Live!” Those three words are “ISRAEL—LIVE ON!”

This article was written by Pastor Nigel Woodley, Flaxmere Christian Fellowship Church, Hastings, New Zealand, and was first published in newspapers including the NZ Herald and the Dominion Post with the support of FCF Church Hastings, Christians for Israel New Zealand and Operation Ebenezer Exodus.