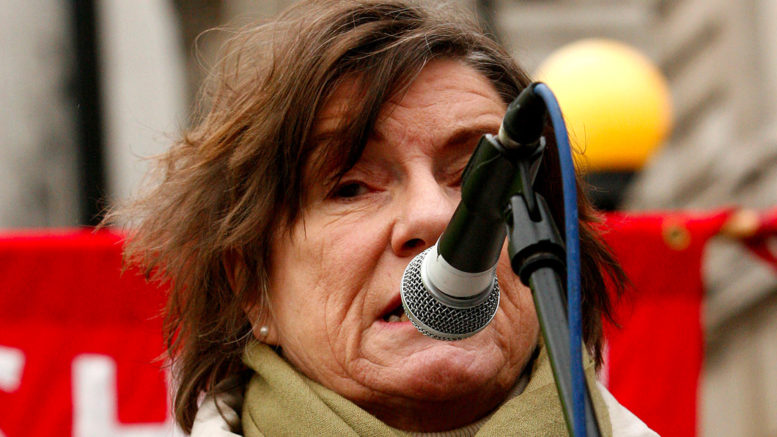 In a Facebook post yesterday, Baroness Jenny Tonge stated “…We would all like a safe haven to run to when the going gets tough, but we stay on and ask why it is getting tough. Why have the Jewish people been persecuted over and over again throughout history. Why? I never get an answer. If we discussed this we would be accused of anti Semitism, so better not, and so it goes on!…”

Tonge’s post was responding to a video produced by The Israel Institute of New Zealand in which a Jewish Kiwi, Juliet Moses, presents a brief history of the Jewish homeland, affirms the indigeneity of the Jewish people and outlines the involvement of the United Nations in Israel’s establishment. The video went viral shortly after its August 2017 release, and has had more than 560,000 views from the Israel Institute of New Zealand Facebook page alone.

It is preposterous to imply that discussion of why Jews have been persecuted in itself should be considered antisemitic. This is a question historians and scholars, among others, have grappled with throughout the ages. However, it IS antisemitic to suggest that Jews are persecuted because they bring it upon themselves, just as it would be to suggest that any other people of a particular race, ethnicity or religion, deserve bigotry, discrimination or persecution, and that they are to blame, not the perpetrators.

Blaming Jews for antisemitism is something Baroness Tonge has done before. In February, 2017, she suggested that a record number of antisemitic incidents was because the Jewish community did not speak out enough against Israel. Mark Gardner, CST director of communications, said Baroness Tonge’s comments “typifies how Israel hatred causes some on the anti-racist liberal left to wilfully ignore, pervert and ridicule the concerns of British and world Jewry about antisemitism.” Her “victim mentality” jibe was “repulsive”, he said.

Only one month earlier she was interviewed on J-TV and referred to the “Israeli lobby”, suggesting that there was unacceptable funding of Israel’s cause. When asked if she really believed that secret funds were being used to pay British politicians by pro-Israeli groups, she replied that “I’m making the allegation and asking people to prove [to] me that I’m wrong… it’s up to the lobby to clear their own name.” She did admit “that’s a good point” when the interviewer pointed out that the UK legal system was based on innocence until proven guilty.

Baroness Tonge has also posted antisemitic material to her Facebook page before. Last year she put up a cartoon comparing Israel to Nazi Germany. This is one of the explicit examples of antisemitism given by the International Holocaust Remembrance Alliance (IHRA) in their widely accepted working definition, which the UK Labour Party has omitted from its adopted definition, causing a furore.

In 2004, Baroness Tonge was stood down as Liberal Democrat spokeswoman for children because she refused to back down after claiming she would consider becoming a suicide bomber if she was forced to live like Palestinians. And in 2010, she accused Israel of being the “cause of terrorism” and said the West’s treatment of Muslims was due to “Holocaust guilt” and the power of the pro-Israel lobby.

With such a history of blaming Jews for attacks on them, perhaps we shouldn’t be surprised by her most recent Facebook post. However, the fact that she hasn’t even bothered to try to couch it in (thinly disguised) terms that demonise Israel or purport to be concerned with advocating for Palestinians, makes it even more shocking.

Unfortunately, this UK politician is not alone in her thinking. The head of the UK Labour Party, Jeremy Corbyn, has been called an “existential threat” to Jews because of his decision not to fully absorb the IHRA definition of antisemitism into the Labour Party code of conduct, the failure to root out antisemitism in the party, and Corbyn’s own history of antisemitism – including a recently unearthed BBC interview where he questions Israel’s right to exist, laying a wreath to honour terrorists who massacred Israelis at the Munich Olympics, and referring to Hamas and Hezbollah as friends.

For those who are truly interested in why Jews have been persecuted over time, Rabbi Lord Jonathan Sacks has given an excellent lecture on this topic. He summarises it in that speech:

– This article was originally published by The Israel Institute of New Zealand.