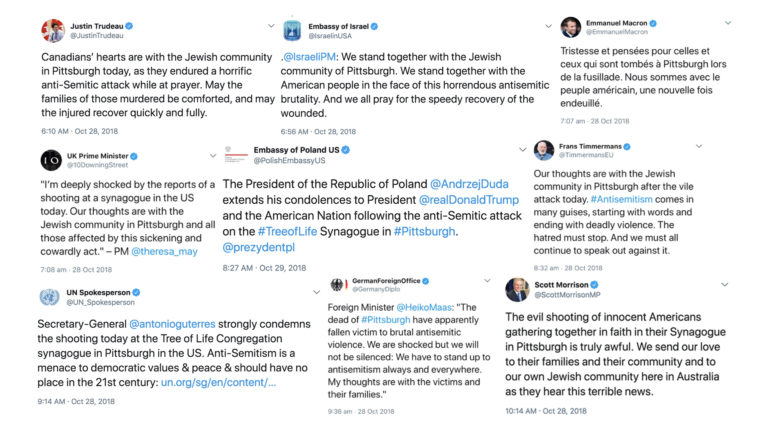 Political leaders from the following countries  have spoken out in condemnation or sympathy over the recent attack on Jewish congregants in a synagogue in Pittsburgh, in which 11 people were killed:
Australia
Canada
United Kingdom
Italy
Germany
France
Israel
The Vatican
Poland
Holland

Even these opponents of Israel condemned the attack:
Hamas
Iran
The Palestinian Authority
Turkey

In New Zealand, however, there has been silence from our political leaders. Neither our Prime minister, Jacinda Ardern, nor our Foreign Minister, Winston Peters, has publicly uttered a word of condemnation or sympathy about this attack.  No message has, to our knowledge, been sent to the US government, the US Jewish Community or the local Kiwi Jewish community, which is shaken by this appalling event. The main opposition party has been similarly quiet.

This omission, while concerning, is not unprecedented. New Zealand government leaders have spoken out against several mass-killings in recent years, including the 2017 Las Vegas shooting, the 2016 Ankara attack, and the 2016 Brussels attacks. However, where Jews have been the primary target, no comment has been made. As well as the silence about Pittsburgh, New Zealand leaders made no statement on the 2016 attacks on Jews in Israel, the 2015 attack in Copenhagen, the 2014 attacks in Jerusalem and Paris, or the 2012 attack in Toulouse.

Our government has, however, been swift to criticise Israel for defending its borders, resulting in Palestinian casualties, but not, it seems to our government, enough on the Israeli side.

Perhaps this was just a simple oversight – it has been a busy week with the arrival of royal visitors, after all. However, in light of other similar omissions, as well as the fact that important Jewish festivals have also passed without acknowledgement by our leaders (in contrast to those of all other significant religious groups), many New Zealand Jews are left wondering whether there is a message in this deafening silence.

UPDATE (01 November, 2018): Prime Minister Ardern’s office has responded to letters from concerned members of the community. They replied “Many thanks for your email to the Prime Minister, Jacinda Ardern, about the tragic shooting at the Pittsburgh synagogue this week.
The Minister of Foreign Affairs, Rt Hon Winston Peters, will be responding to your email, as this is something which falls into his area of responsibility.
Thank you for writing
Best wishes”

UPDATE (01 November 2018): Simon O’Connor, MP, sent the following message to the Jewish community:
“Excuse my silence over recent days; I have in South Korea visiting some of our troops at the border and meeting my political counterparts here in Seoul. I am only getting back to my correspondence now but with all the tragic and disturbing events in Pittsburgh, be assured it was something I have been very aware of and my thoughts and prayers have been with the Jewish community. Now that I can write again, I have put a few words together below for you and the wider community:

I was shocked to hear of the appalling violence perpetrated against the Jewish community in Pittsburgh on Saturday. I wish to express my condolences to all of the families affected and to the Jewish community in Pittsburgh. I would also like to convey my sympathy to the wider Jewish community here in New Zealand and around the world. This is yet another example of a disturbing rise in anti-Semitism that we have seen in recent years. Despite the fear and sadness that this event has understandably generated in Jewish communities, I hope that you can find comfort in knowing that so much of the world stands with you. The strength of the Jewish people will not be diminished by the barbaric actions of a hateful few. Clearly, we have a long way to go in ending this terrible prejudice and the horrific violence to which it leads. I know we will succeed because we all know we must.

With thoughts and best wishes

Simon
Member of Parliament for Tamaki
Chair of the Foreign Affairs, Defence, and Trade Committee”

UPDATE (02 November, 2018): Alfred Ngaro, MP, posted the following message on social media:
“My belated condolences תַּנְחוּמִים
To the families of the Tree of Life Synagogue in Pittsburgh, USA. As the chair of New Zealand Israel Parliamentary Friendship Group I am truly saddened for the families whose loved ones have been tragically taken away. This crime of hatered reminds us of the importance to be Constantly vigilant of the anti Semitism that at times confronts our Jewish community.

UPDATE (03 November, 2018): Simon Bridges, leader of the NZ National Party, sent the following message to the Jewish community:
“The National Party condemns the recent horrific attack on the Jewish Community in Pittsburgh. No one should be forced to live in fear, no matter their race or religion, their politics or their beliefs, or to be targeted while going about their daily lives. My thoughts, and the thoughts of our Caucus, are with the victims of this attack as well as their families and friends and your community. Terror and anti-Semitism have no place in our international community and we must continue to work together to end it and ensure hatred doesn’t prevail.”