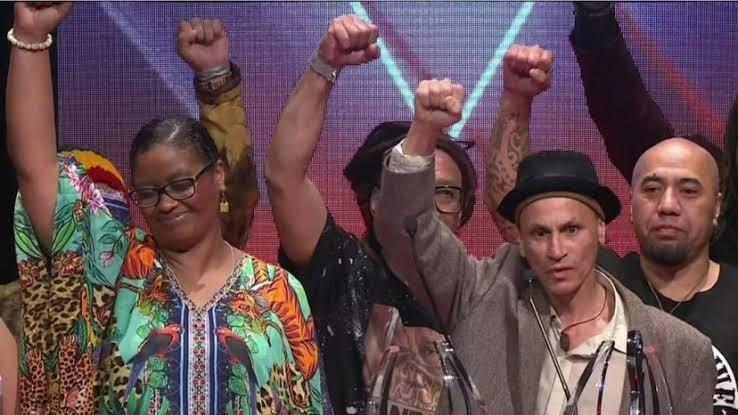 Like much of New Zealand, you may not have heard of Upper Hutt Posse until Friday, or if you had, it may have been a long time ago.

On Thursday night, the band, described on its Wikipedia page as the “progenitors of Hip-hop music in the South Pacific” and “a powerful vehicle for their revolutionary socio-political perspectives”, won a legacy award at the televised Vodafone New Zealand Music Awards. On accepting the award, the band’s frontman Dean Hapeta, aka TeKupu, took advantage of quite possibly the biggest live audience he has ever had, by giving it the benefit of his geopolitical insights.

“Where’s that Prime Minister, even if it was a fake acting one up here? I got some words for you: all of our armed forces and military that have been fighting in these fake wars in Afghanistan and Iraq for oil, for USA imperialism – get outta there! What you need to be doing is going to Palestine to fight against the racist terrorism of the Israeli state. That is where all of our fighting energy needs to be.”

He then ranted some more about the “United Snakes of Ameri-KKK” before shouting “Death to all oppressors!”

There is much that could be said about Hapeta’s post-colonialist 101 textbook worldview, that clearly blames all the world’s ills on the West (and more precisely the USA and Israel), and overlooks the fact that Saddam Hussein, ISIS and the Taliban have all brutally oppressed the people of Afghanistan and Iraq. There is also much that could be said about the hypocrisy of people who lauded this speech with its incitement to violence, but are also in favour of banning “hate speech” – apparently being words that they deem to be offensive uttered by people they don’t like.

Certainly, there was much that was said about the tirade on social media, with well known journalists and media commentators, among others, opining. Bryce Edwards called it “refreshing”. Mihingarangi Forbes praised it, although having been criticised for doing so, she removed her tweet the next day, saying she did not wish harm on anyone. Forbes’ boss, executive producer of the Hui, Annabelle Lee-Mather shared an article about it with no comment. Sean Plunket, Matthew Hooton and David Cohen were critical. 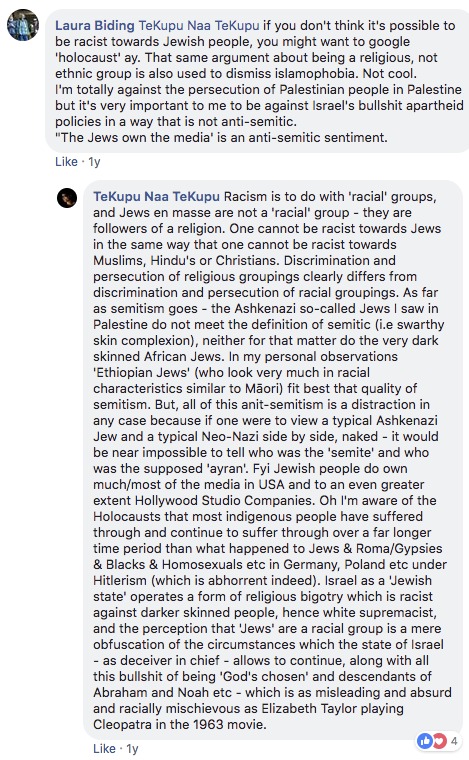 There were also those who defended it, saying comments on Israel and Palestine were not antisemitic. However, a brief exploration of his Facebook page puts beyond doubt that Hapeta is indeed antisemitic.

In one post alone, he proclaims that:
– Jews are only a religion and not a “racial group”, and that one cannot, therefore, be racist towards them,
– that the “Ashkenazi so-called Jews in Palestine” aren’t Semitic because they don’t have a swarthy skin complexion,
– that it would be near impossible to tell apart a typical Ashkenazi Jew and neo-Naz if they were standing side by side,
– Jews own much/most of the US media and Hollywood,
– there are Holocausts under which indigenous people have suffered and continue to suffer for much longer,
– Israel is a white supremacist state and “deceiver in chief”, and
– Jews being “‘God’s chosen and descendants of Abraham and Noah etc” is “bullshit”.

With this one post, he is well on the way to completing the antisemitism bingo board. In a week when blackface appears in a parade on the main street of Hawera, it seems especially ironic and more than a little disappointing to have an indigenous person erasing Jewish ethnicity on the basis of how he perceives Jewish people’s skin colour. And ironically, while railing against white supremacy, Hapeta’s post reveals that he shares some ideology in common with Robert Bowers, the white supremacist who recently killed 11 Jews in a Pittsburgh synagogue, by accusing Jews of exerting too much control over certain parts of the United States establishment.

Unsurprisingly, his social media also reveals that he is a fan of Louis Farrakhan, the American leader of the Nation of Islam, who praises Hitler and subscribes to a black nationalist ideology. Farrakhan has been applauded for his advocacy for the black community but is notorious for his anti-white, homophobic and antisemitic statements – recently he called Jews ‘termites’ – and has just been in Iran chanting “Death to America”. Upper Hutt Posse were in fact invited by Farrakhan to perform in Detroit for Nation of Islam as his guests in 1990, and travelled there with Willie Jackson.

According to the Southern Poverty Law Center, which considers the Nation of Islam to be a hate group, Farrakhan blames Jews for the slave trade, plantation slavery, Jim Crow, sharecropping and general black oppression. In a speech in 1996, he said: “You are wicked deceivers of the American people. You have sucked their blood. You are not real Jews, those of you that are not real Jews. You are the synagogue of Satan, and you have wrapped your tentacles around the U.S. government, and you are deceiving and sending this nation to hell.” There are strong echoes of this venomous diatribe in Hapeta’s Facebook post above.

What this shows us, is that when those who declare themselves to be fighting against oppression demonise Israel and call for death, it is always worth digging deeper. Not everyone who vocally opposes Israel or supports the Palestinians is antisemitic, but not everyone who does so, isn’t.

It’s disappointing that at a time when racism is on the rise around the world, Hapeta is stoking it by practising his own toxic bigotry and hatred under the guise of fighting oppression, and perpetuating stereotypes and tropes about a historically and continually persecuted minority. It’s a great shame that he does not realise that Maori and Jews have much in common. Indeed, in recognition of that, there is a wonderful mutually supportive and spiritually uplifting relationship between much of the Maori community and the New Zealand Jewish community, which is growing in strength.

It’s never pleasant exposing an antisemite. It can be profoundly disturbing for Jews and fair-minded people of all backgrounds, and confronting for those who respected the antisemite, unaware of his or her prejudice. It can also be a hard judgement call, because calling out an antisemite often attracts more antisemitism, smears and abuse, and it risks giving the antisemite more attention.

But on this occasion, the momentary spotlight that has shone on a man being honoured for his band’s contribution to the New Zealand music industry, has revealed outright antisemitism that cannot remain unchallenged or be allowed to fester.