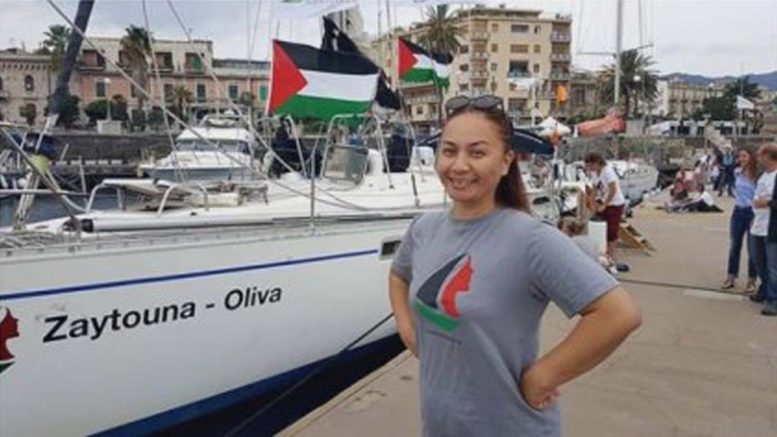 A day before Marama Davidson’s announcement that she was putting her name forward as a candidate for the Green Party’s co-leadership she attended an anti-Israeli protest organised by  the Palestinian Solidarity Movement and Kia Ora Gaza – the same group that sent Marama on the ‘Ship of Fools’ to Gaza – to demonise Israel.

One would have thought Ms Davidson would have learned from her flotilla misadventure, a stunt which yielded nothing but shame for the Green Party. In agreeing to join the ship, Ms Davidson chose to violate international law and another country’s sovereignty for the sake of a media stunt. She also aligned herself and the NZ Green Party with activists who glorify killing Israelis, blame Israel for 9-11, and work against women’s equality. As part of the boat stunt, Ms Davidson – knowing she would be detained by Israel for attempting to breach the legal blockade –  pre-recorded a rescue message, claiming she had been ‘kidnapped’.

While one could put the misadventure and hysterical claims of ‘kidnapping’ down to inexperience, Ms Davidson’s speech at the anti-Israel rally suggests she remains ignorant of the complexities of the the Israeli/Palestinian conflict and is focussed only on demonising Israel.

The rally was ostensibly in support of Ahed Tamimi, a 17 year old veteran Palestinian activist who was arrested for assaulting a soldier. While many things can be and have been said about Tamini, Davidson’s statement at the rally that ‘Not one child should be held in detention in the world anywhere’ rejects the United Nations Convention on the Rights of the Child or the reality that some youths can commit violent crimes and be a danger to others.

Ms Davidson’s comment is also neither fitting or applicable in describing Tamimi’s position. There is video evidence of Ms Tamimi assaulting Israeli soldiers. The footage is remarkable for the restraint of the soldiers more than anything. Especially as Ms Tamimi has a history of these violent incidents, and comes from a family that stages and films such moments for propaganda purposes and encourages terror attacks against Israeli civilians. Would New Zealanders find it acceptable for teenagers to flout the law and assault police officers or to incite terror? New Zealand Police are likely to have also arrested the young woman, just as they arrested and detained thousands of Kiwi youth last year.

In her speech at the anti-Israel rally, Ms Davidson repeated the slogan “peace through justice” several times and affirmed the “rights of Palestinians” but offered no tangible solutions other than praise for the attempts to break a legal naval blockade. Ms Davidson ignores the thousands of containers and people that Israel facilitates across the border or of the booming Gaza economy, let alone the rockets and tunnels that necessitate the blockade. If Davidson wants to be taken seriously as an MP she needs to do more when confronted with cold facts than merely repeat tired and empty slogans.

If Ms Davidson really cares about justice for the Palestinians she should put the blame where it lies – with Palestinian leaders. She could investigate the corruption of the leaders, their inability to work together, their failure to provide for their own people, their amassing of personal wealth, their failure to uphold human rights and hold free elections, their unwillingness to accept offers of land for peace, their ongoing support for and incitement of terrorism.

And, as a Green MP without a portfolio, it might be incumbent on Ms Davidson to recognise the contributions Israel has made in terms of cleantech and environmental issues or Israel’s medical marijuana leadership rather than focus on a specific foreign policy issue.

The fact that Davidson continues to beat such an anti-Israel drum raises questions about her judgement and wisdom. The lack of substance or nuance in her rhetoric raises doubt over her ability to grapple with complex issues. Is she really equipped to co-lead a political party? Spouting dogma may be fine for a street activist, but falls far short of what should be expected of a serious political party leader.