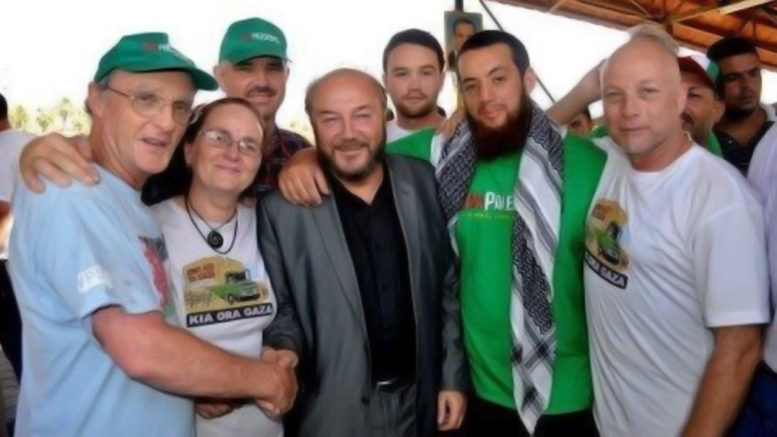 The reality is that Kia Ora Gaza’s activities are hardly humanitarian, and it actively works against peace and reconciliation between the Palestinians and Israelis. In effect it works to prolong the conflict, while fomenting hate and distrust through a deliberate campaign of misinformation and incitement.

In short, Kia Ora Gaza is a hate group. How do we know this? Quite simply, we listened to its rhetoric, the rhetoric of its representatives, and reviewed and analysed what it posts on its website and on social media.

Here are six good reasons why Kia Ora Gaza is a hate group:

Kia Ora Gaza has recently affirmed its support for a third intifada. In other words, it supports the current wave of knife attacks, car rammings and shootings aimed at Israeli civilians; parents murdered in front of their children, a 13 year old boy stabbed on his bike, a Rabbi run down by a car and then hacked to death with a meat cleaver. Kia Ora Gaza justifies all of these attacks as a legitimate response to “occupation”, and considers stabbing an elderly person, or a 13 year-old boy “an act of self defence”.

The “blood libel” has been used for centuries to justify and incite mob violence and pogroms against Jews.  In the Middle Ages it was said that Jews murdered Christian children for ritual purposes. These days, replace “the Jews” with “Israel” (the Jewish State) and we see a whole new type of blood libel. Many of these are being spread by Kia Ora Gaza. Recently, for example, Kia Ora Gaza has been posting articles with the bizarre and fraudulent accusation that Israel has been harvesting organs from dead Palestinians.

Kia Ora Gaza’s spokesman, Roger Fowler QSM, made the equally preposterous claim on Maori Television that Israel (a thriving democracy) was the model for ISIS (a bloodthirsty group dedicated to worldwide domination), and that Israel “sets the benchmark for barbarism in the region”. In fact, Kia Ora Gaza is only interested in manipulating facts to demonise and incite hatred toward the Jewish state, rather than engaging in any semblance of reasonable debate.

In a recent TV appearance Mr Fowler made it clear that, unlike the vast majority of western governments, the UN, and the parties themselves, Kia Ora Gaza is not in favour of the two-state solution (with an independent Palestinian state existing alongside Israel). Instead it wishes to see a single state, which would entail the dismantling of the Jewish state, the denial of the Jewish right to self-determination, and very likely another violent catastrophe for the Jewish people. Kia Ora Gaza is not a group committed to a peaceful outcome for both sides, but a group interested only in the destruction of the Jewish homeland.

Kia Ora Gaza this year participated in “Freedom Flotilla III”, an illegal and ill-advised publicity stunt, in which it claimed it was taking “urgently needed medical supplies” to war-ravaged Gaza. Kia Ora Gaza facilitated a journalist and cameraman from Maori TV to particpate in the Flotilla and record the inevitable confrontation with Israeli forces. It later transpired that the “aid” on board the ship consisted of one nebuliser and one solar-panel.

If Kia Ora Gaza actually cared about its primary aim of “delivering aid to Gaza” and distributing aid, it could have (at a fraction of the cost and without the risk) sent supplies in one of the hundreds of trucks carrying aid sent every day from Israel into Gaza. But Kia Ora Gaza is not nearly as interested in humanitarian aid as it is in pushing an extreme ideological agenda.

5. Kia Ora Gaza is completely one-sided in its condemnation

If Kia Ora Gaza really cared about the plight of the Palestinian people, surely along with criticising Israeli leaders it would also comment about Hamas and its brutal suppression of human rights, its murderous persecution of gays and political opponents, its willingness to sacrifice its own civilians as human shields (while Hamas leaders take shelter in the safety of bomb shelters or the luxury of five star hotels in Qatar), its exploitation of child labour in building the terror tunnels, its failure to deliver its people any progress or solutions beyond attacking Israel …we could go on.  Rather than condemn Hamas, Kia Ora Gaza openly lauds and celebrates these brutal warlords.

Kia Ora Gaza could also call out Palestinian Authority President Mahmoud Abbas, now in the 11th year of a four-year term, currently living it up in his magnificent compound financed through corruption.  Or it could ask him why he rejected an unprecedented offer in 2008 for a viable independent state and didn’t even come back with a counter-offer. But it won’t, because to do that would not fit within Kia Ora Gaza’s dogmatic, one-tracked, anti-Israel world-view.

BDS actively discourages cultural exchanges between Israelis and Palestinians, seeks to censor Israeli artists and has been overwhelmingly condemned for its divisive and discriminatory singling out of Israel and for promoting violations of academic freedom.

The highest court in France has found BDS promoters guilty of inciting hate or discrimination. BDS’s ultimate goal is the elimination of Israel and the violation of Jewish rights to self-determination. Rather than furthering the cause of peace and reconciliation, its activities harm ordinary Palestinians by attacking their livelihood.

If you support the Palestinian cause and, like us, want to see a peaceful resolution between Israel and the Palestinians, we suggest you look for organisations that foster engagement, mutual understanding and dialogue, not blind hatred and bigotry.

There are a lot of good peace-loving groups out there on social media; try Palestine Loves Israel, or Arabs and Jews Refuse to Be Enemies, just to name a few. Just don’t be fooled into thinking that supporting Kia Ora Gaza is helping anyone other than ideological extremists.