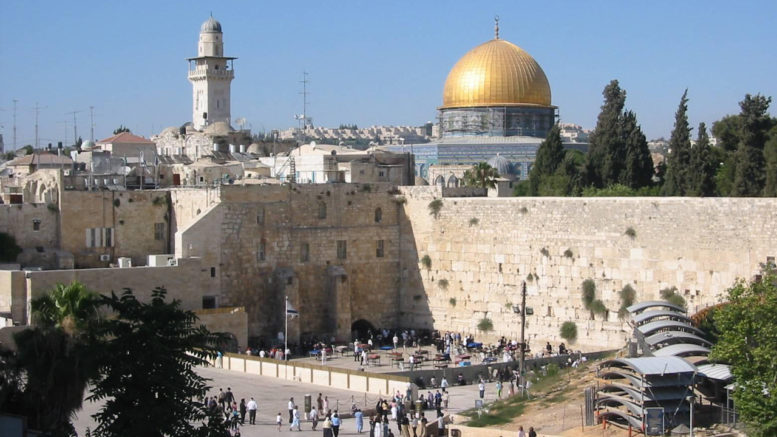 UNESCO made a mockery of its purpose on Friday when it passed a resolution effectively writing Jews out of the history of the Temple Mount in Jerusalem, Judaism’s holiest site.

The resolution, which was passed with 24 votes in favour, 6 against and 26 abstentions, acknowledges Jerusalem’s significance to three monotheistic religions: Judaism, Islam and Christianity. However, in a section pertaining to the Temple Mount, it claims that the site is sacred only to Muslims and fails to mention it as sacred to Jews. The text of the resolution only refers to the site by its Muslim name, the Al-Aqsa Mosque, and not to the Hebrew name – Har Habayit – or its English translation, the Temple Mount.

In effect, the United Nations Educational, Scientific and Cultural Organization has erased nearly 4,000 years of history in this move; an act of cultural vandalism that is simply Orwellian in its absurdity.

To deny, conceal or erase any of the Jewish, Christian or Muslim traditions undermines the integrity of the site, and runs counter to the reasons that justified its inscription on the UNESCO World Heritage list.”Irina Bokova

While the Temple Mount is the third most holy site to Muslims, after Mecca and Medinah, the Temple Mount is of the utmost spiritual significance to Jews. This significance traces back to events described in the Torah (or, to Christians, the Old Testament of the Bible), involving the father of monotheism, Abraham. Both the Jewish and Islamic texts identify the Temple Mount (also known as Mount Moriah) as the site where Abraham offered up his son, Isaac, in sacrifice (Genesis 22:1-18; the Koran, Sura Al-Saffat 37:102-110).

At this same spot, King Solomon built the First Temple almost 3,000 years ago. Seventy years after it was destroyed by the Babylonians, the Jews returned from exile and built the Second Temple on the same site, which King Herod developed in a grander and more splendid style. This iteration lasted until destruction by the Romans in 70AD, when the Jews were once again sent into exile. The archaeological evidence for the existence of the Jewish temples on the Temple Mount is overwhelming.

Ever since the second expulsion, Jerusalem, and in particular the Temple Mount, have featured in the daily prayers of Jews and even dictates the direction in which they stand in prayer (always eastward). The destroyed Temples are never forgotten, even at happy occasions such as weddings, when the groom shatters a glass to remember those devastating events. The words from Psalm 137 are often sung at such occasions: “If I forget thee, O Jerusalem, let my right hand lose her cunning. Let my tongue cleave to the roof of my mouth, if I remember thee not”.

The last remaining wall of the Temple, known as “the Western Wall”, is a place of pilgrimage and prayer for hundreds of thousands of Jews every year and is considered the centre of the Jewish world.

According to Robert Nichols, the head of the Philos Project, a nonprofit group that seeks to promote positive Christian engagement in the Middle East,

UNESCO’s decision to deny Jewish history is also a decision to deny Christian history. If the Jews don’t have a legacy on the Temple Mount, neither do Christians. And yet we know that our Messiah Jesus came to the Temple throughout his life to worship and pray to the God of Israel, as a Jew, six centuries before Muhammad was even born.”Robert Nichols

The historical revisionism contained in the resolution was accompanied by inflammatory, one-sided criticism of Israel. The resolution was drafted by the Palestinians but submitted by the genocidal regime of Sudan, together with human rights abusers Algeria, Egypt, Morocco, Oman, and Qatar.

Unsurprisingly, Friday’s vote has been followed by stinging criticism and condemnation from around the Jewish world.

The Chief Rabbi of the Commonwealth, Rabbi Ephraim Mirvis, made the following statement in response to UNESCO’s vote:

“Nearly four thousand years ago at Mount Moriah our patriarch, Abraham, taught his son, Isaac, that this was a place more special to them than any other on earth; a place later to be called Jerusalem.

During the millennia that followed, the Jewish people were exiled, enslaved and redeemed. We built Temples and Kingdoms but were tortured and subjugated. We were crucified, persecuted and nearly exterminated. Throughout it all, in every generation, parents resolved to teach that same lesson to their children. They taught that Jerusalem is the very heart of the Jewish people, it is the centre of our physical universe and it is the place where the Divine presence itself rests.

The UNESCO resolution, which whitewashes our deep and eternal relationship with Judaism’s holiest site, is an affront to our identity and undermines positive dialogue for peace in the region. But, four thousand years from now, Jewish parents will still be teaching this very same lesson to their children and there is nothing that UNESCO can say or do to change that.”Rabbi Ephraim Mirvis

It is unclear what practical effect, if any, this resolution will have. However, its symbolism speaks volumes. Its objective is to further delegitimise the state of Israel and the Jewish people, and by doing so pushes the prospect of peace between Palestinians and Israelis further away. What is also clear is that such politicisation, dishonesty and dysfunctionality should be of great concern in an organisation whose purpose is to promote peace and security in the world.