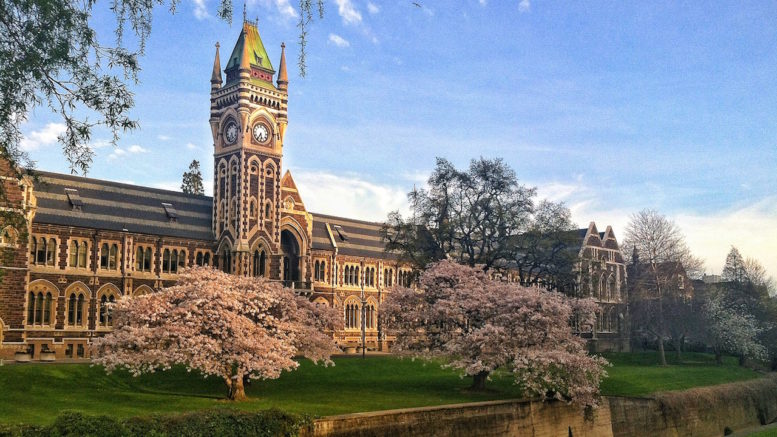 According to the NZ Herald a number of NZ’s ‘leading academics on conflict resolution have slammed the country’s “dangerous double standard” on the Israel-Palestine problem’. These “leading academics” include two University of Auckland Dance Studies lecturers, a senior lecturer of the Massey University School of People, Environment and Planning and two professors from the National Centre for Peace and Conflict Studies at the University of Otago.

Quite how these academics qualify as experts – or even objective commentators – on the complex Israeli-Palestinian question is a moot point. There is much to contest in the letter and numerous factual inaccuracies. What is clear, however, is the academics’ eschewing of Western Liberal values for support and appeasement of terrorists.

While this group praised Mr McCully for co-sponsoring UN Resolution 2334, they believe New Zealand hasn’t gone far enough as it failed to impose sanctions on Israel or its products made in the settlements. They believe it is a double standard that the NZ government imposes sanctions on ‘Palestinian groups involved in violence’, but not Israel.

If one was in doubt that these advocates are equating Palestinian terrorism against Israeli civilians with the legitimate defensive actions of the Israeli military, it is made explicitly clear by one of the academics. In his article ‘Confessions of a terrorist sympathiser’, Richard Jackson presents the terrorists as victims, removing responsibility and justifying their violence against innocent civilians. He states, ‘Despite the comforting myths we tell ourselves, “our” violence is no different from “their” violence’.

This rhetoric may have traction in the hallowed halls of academia, but the real world looks much different. Their letter to McCully helpfully refers to the ‘List of Designated Terrorist Entities in New Zealand pursuant to UNSC Resolution 1373’. At least three Palestinian Groups are included on this list. See below for brief examples of the evidence by which our government has ruled that the designation of these groups as terrorist entities should continue.

While Jackson sympathises with terrorists from the safe distance of the southern reaches of the South Island, Israelis face the reality of neighbours on their doorstep committed to their destruction. Just last week, rockets were fired towards the Israeli resort Eilat from the Sinai peninsula, within hours of 6 market-goers being injured in a stabbing and shooting attack in Petah Tikva. An Islamic State-affiliated group claimed responsibility for the rockets, all but one (which landed in an open field) being intercepted by the Iron Dome. Jackson’s attempt to place Israeli defence forces on the same moral plane as these terrorists does not withstand scrutiny.

A report by a High Level Military Group Assessment of the 2014 Gaza war (written by specialists who have actually led military operations and resolved conflicts), concluded:

The responsibility for the outbreak of the 2014 Gaza Conflict lies with Hamas… We can further be categorically clear that Israel’s conduct in the 2014 Gaza Conflict met and in some respects exceeded the highest standards we set for our own nations’ militaries. It is our view that Israel fought an exemplary campaign, adequately conceived with appropriately limited objectives, displaying both a very high level of operational capability as well as a total commitment to the Law of Armed Conflict…Hamas in turn not only flagrantly disregarded the Law of Armed Conflict as a matter of course as part of its terrorist-army hybrid strategic concept, but rather it abused the very protections afforded by the law for military advantage. Embedding its entire military machinery in civilian locations and sensitive sites, including those of the United Nations, Hamas indiscriminately targeted Israeli civilians…High Level Military Group

The New Zealand “leading academics” also invoke Islamic State’s propaganda as a reason to sanction Israel, suggesting that such sanctions might appease that terror group. The “experts” further wrote that they would like to see sanctions placed on Israel because it will appease NZ’s Middle Eastern and Muslim trade partners, “countries who are heavily critical of Israeli violence and violation of human rights”. There is no mention in the letter about any human rights abuses from those same countries. And while these academics bemoan the US/Israel “power imbalance”, they fail to acknowledge the level of Iranian support (finance, arms, and training) for Palestinian terrorist groups. So much for double-standards.

It is disconcerting that New Zealand chose to stand with leading human rights violators and anti-Semitic nations Venezuela, Malaysia, and Senegal in co-sponsoring UNSC Resolution 2334; and that Israel’s relationship with some of its neighbours is better than it’s ever been, while its relationship with this country has reached an all-time low.

Now “leading academics on conflict resolution” in New Zealand are openly equating terrorism against civilians with the responsible actions of a state protecting its citizens, and they’re being given a platform by this country’s leading newspaper. The distinction between terrorism and a state defending its citizens must be held in clear view if we value the peace and freedom that our democratic nation prides itself on. These are values for which we must be willing to stand.

Palestinian groups designated as terrorist entities by the NZ Government

The AAMB was established as a network of Palestinian militias during the second Palestinian intifada in late 2000, drawing recruits and funding primarily from the Fatah party (then led by Yasser Arafat). AAMB was initially focussed on small arms attacks. In 2002, however, the group began to take part in suicide bombing against Israeli civilians.

AAMB was designated as a terrorist entity in 2010 and that designation was renewed in 2013 and 2016. The latest Statement of Case to renew the designation included the following examples of terror activities:

Hamas’ Charter was published in 1988 and records the commitment of the organisation to destroying Israel and achieving an Islamic Palestinian State. The Charter views violence as the only appropriate means to achieve these related political and religious objectives. The Brigades were established in 1992 as the military wing of Hamas.

Iran’s Revolutionary Guards reportedly transferred tens of millions of dollars to the Brigades over several months in early to mid 2015. The funds were primarily used to help rebuild a network of tunnels and replenish depleted stocks of medium-range missiles.

The Brigades was designated as a terrorist entity in 2010 and that designation was renewed in 2013 and 2016. The latest Statement of Case to renew the designation included the following examples of terror activities:

PIJ was formally established in Gaza in 1981 by two Palestinian activists who were originally members of the Muslim Brotherhood. PIJ’s strategic objective remains unchanged since its founding: the complete ‘liberation of Palestine’ as defined by the borders of the pre-1948 British mandate. Like Hamas, PIJ refuses to participate in the political process and considers the destruction of the state of Israel through armed ‘resistance’ the only viable strategy for achieving their objective. PIJ considers itself a “revolutionary vanguard” whose armed attacks will inspire the Palestinian people to follow its example and will unite the Arab and Muslim worlds against Israel.

PIJ is reported to be the second strongest armed movement in Gaza after Hamas, with approximately 2000-3000 fighters. The majority of PIJ’s members are recruited from Palestinian communities in Gaza and the West Bank. Iran finances, arms and trains PIJ as well as Hamas. In October 2014, Iranian Foreign Minister Mohammad Javad Zarif expressed Iran’s full support for Palestinian resistance and congratulated PIJ’s leadership for the “victory” in the 2014 Gaza War with Israel.

The Brigades was designated as a terrorist entity in 2010 and that designation was renewed in 2013 and 2016. The latest Statement of Case to renew the designation included the following examples of terror activities:

Shalom.Kiwi @ShalomKiwi @StateSEAS: He can blame “Zionists,” the U.S., or anyone else, but it’s clear to the world and the Iranian people that his regime’s violent misogyny ignited these women-led protests. https://t.co/j8Tw8seXLo

h J R
Shalom.Kiwi @ShalomKiwi @POTUS: I welcome @IsraeliPM Lapid's courageous statement at the UN General Assembly: “An agreement with the Palestinians, based on two states for two peoples, is the right thing for Israel’s security, for Israel’s economy, and for the future of our children.” I could not agree more.

h J R
Shalom.Kiwi @ShalomKiwi @yairlapid: I say to the people of Gaza: we are ready to help you build a better life, to build an economy. We presented a comprehensive plan to help rebuild Gaza. We only have one condition: stop firing rockets and missiles at our children.