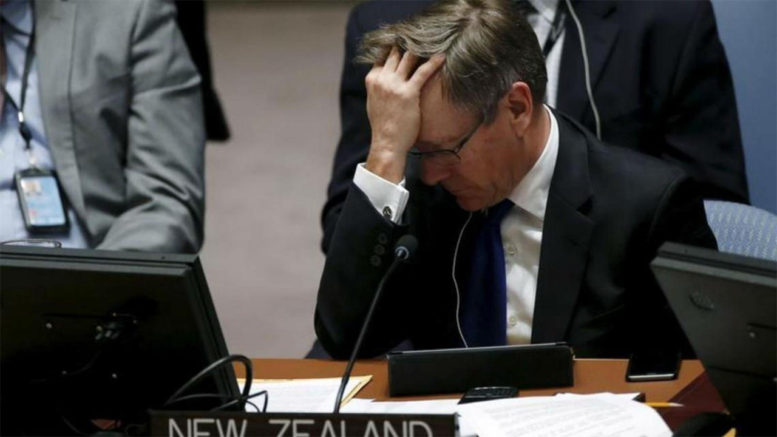 Since the passing of anti-Israel UN Resolution 2334 on Christmas Eve last year, co-sponsored by New Zealand, there have been questions about what kind of mandate the Foreign Minister had and the level of prior advice and knowledge of the Government.

Questions about New Zealand’s involvement in the passing of the Resolution were raised this week by Winston Peters in parliament. Peters asked Gerry Brownlee, standing in for the Foreign Minister, whether the resolution had been put before cabinet. Brownlee obfuscated for five minutes or more and failed to answer the question, but he gave the impression that it did not go to cabinet, as procedure demands.

While it’s still something of a mystery how much the New Zealand government knew about the genesis and passing of Resolution 2334, a talk on 9 March 2017 by Gerard van Bohemen to the New Zealand Institute of International Affairs shed light on some diplomatic maneuverings on this issue and showed how New Zealand was a driving force behind the anti-Israel resolution.

From the start of New Zealand’s term on the Council, Foreign Minister McCully made it clear that he wanted to have a resolution on the Palestinian/Israeli conflict, as van Bohemen explained:

This was Mr McCully’s test to me. He said, if the Security Council is going to mean anything, surely it can table some action on one of the world’s most intractable long-standing conflicts, surely it can say something, even a little something on the Middle East.”Gerard van Bohemen

To that end, New Zealand drafted a resolution in late 2015, which van Bohemen described as ‘very balanced’, despite it being more empty-handed than even-handed. The consensus at that time, however, was that any resolution should wait until President Obama’s “lame duck” period. This was a sentiment echoed in Murray McCully’s NZ Herald opinion piece. Van Bohemen specifically mentioned the “Jewish lobby”, saying

The theory being that traditionally the Jewish lobby is Democratic and a great concern on the part of the administration was that a contentious resolution could be used to divide that lobby. Accepted wisdom became, you can’t run a resolution on Palestine before elections 2016.”Gerard van Bohemen

However, as 2016 and New Zealand’s term on the Council and Obama’s term in office drew to a close, a resolution on the ‘Middle East Conflict’ had still not been tabled. Arab nations at the UN made it clear that they had far more pressing concerns:

Some friendly Arab ambassadors took me aside and said, “It’s fantastic that a country like NZ makes an effort”, but you’ve got to understand that in the ME at the moment, for some Arab countries, it’s Syria that takes all the oxygen and that’s more important for them, and for others it’s Libya and North Africa problems, and for others Iraq that concerns them. While they would all rally around, it’s not the thing that’s actually concerning them.”Gerard van Bohemen

Ignoring requests to shift focus away from the Israeli/Palestinian conflict and toward genocides and raging civil wars, New Zealand convened Council members to discuss how they might do ‘even a little something’, proposing the New Zealand-drafted resolution once more. However, Palestinians were not happy ‘that a non-Arab country was running a resolution on an Arab issue’ and preferred that it be tabled by Egypt.

The Egyptians eventually did put forward a resolution, based on Palestinian text, and tabled it on the evening of 21 December for a vote the next day. Van Bohemen contacted Minister McCully for instructions and expressed disappointment that, although a resolution would be tabled, New Zealand could not take the credit for it, saying:

I went to bed feeling deflated. It was nice to have a resolution…It would have been nicer if it had been our one.”Gerard van Bohemen

McCully’s response in the morning – with or without cabinet approval – was, “yes, we’ll support it. It’s straightforward, consistent with our policy and you can co-sponsor it.” However, far from being ‘straightforward’, the resolution was a significant departure from previous resolutions and New Zealand policy, as Shalom.Kiwi has described here, here, here, here, and here.

Nevertheless, New Zealand co-sponsored the resolution, along with Venezuela, Senegal and Malaysia. Ambassador van Bohemen explained, ‘we didn’t have to sponsor it…we volunteered’. And when Egypt pulled out from putting the resolution to the vote only a few hours later, New Zealand and the other three co-sponsors stepped in to make sure it would be voted on – choosing to follow seldom-used procedures of the UNSC.

The vote passed on 26 December 2016 with the US abstaining and all 14 other members voting for it. US Ambassador Samantha Power explained the abstention was due to anti-Israel bias and because the US did not agree with every word in the resolution. The bias and the wording of resolution did not seem as important to New Zealand representatives, as van Bohemen admitted,

That resolution was someone else’s resolution that we took over the line. If it was our resolution the language would have been different. We wouldn’t have put it quite that way, but we were comfortable with it. Gerard van Bohemen

Van Bohemen described the atmosphere on the day of the vote as ‘highly charged’, both because of the issue, and because it was taken at very busy moment, on the last Friday before Christmas. The ambassador clearly understood that the resolution was an insult to Israel, saying

We had to find time, and had to vote before 3pm. It was Sabbath at 3 o’clock. We did not want to create that additional insult to the fact.”Gerard van Bohemen

In fact, van Bohemen said there was ‘palpable elation’ and he was ‘proud of what New Zealand did’. Regarding the discomfort that the resolution wrought on Israel and her supporters, van Bohemen considered that ‘outside [his] job’. He said

That’s between the NZ government and the Israeli government. There’s a strong desire of NZ to get the relationship right. Nothing in that resolution was a surprise. We understood that they would be disappointed, but we do hope that we can move past this point.”Gerard van Bohemen

He elaborated on this in an interview with Radio NZ, saying:

On the question of restoring relationship with Israel, the ball is very much in their court because they are the ones who took the decision to withdraw their ambassador. But we can’t see it’s in either country’s interests to have a bad relationship.”Gerard van Bohemen

Many New Zealanders also hope that we can move past this point and restore a positive relationship. However, many would disagree with the view that the ball is in Israel’s court. The Israeli withdrawal of their ambassador was in response to New Zealand’s choice to sponsor an anti-Israel resolution that excoriates and delegitimises an ally and the only democracy in the Middle East. If it’s not in New Zealand’s interests to have a bad relationship with Israel, as van Bohemen says, this should have been considered before sponsoring the resolution. This action has likely harmed chances of Israeli political support for any NZ/Israel agreements, such as the innovation deal worth an estimated $2b between Australia and Israel.

Resolution 2334 would, however, have garnered favour with the Organisation of Islamic Cooperation and Non-aligned countries. It is no secret that New Zealand has been busily pursuing trade opportunities with Saudi Arabia, Iran, and other OIC members. Or it might just have been a naive attempt to secure a personal legacy on the part of McCully.

Either way, the single focus on a trophy resolution that lacks historical accuracy, balance and fairness, hardly befits a body with the responsibility of the Security Council. Rather than promoting dialogue between the parties, McCully’s legacy has simply made the chances of peace more remote. In effect, his easy goal may prove to be an own goal.