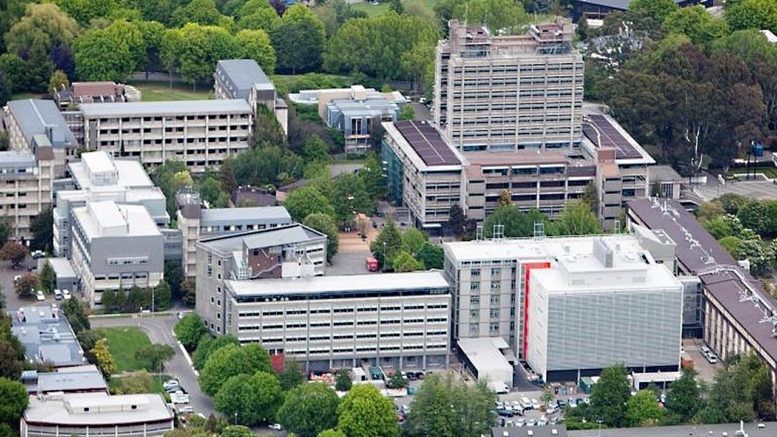 New Zealand is the only Western country where a tertiary institute has awarded a degree to a work of Holocaust denial or revisionism. Joel Hayward wrote a Master of Arts thesis at Canterbury University that concluded “the weight of evidence supported the view that the Nazis did not systematically exterminate Jews in gas chambers or have extermination policies as such”.

Sir Richard Evans described Hayward’s thesis as “a thoroughly tendentious, biased and dishonest piece of work” and a Working Party set up by Canterbury University after complaints were lodged eventually rejected the “perverse and unjustified conclusion”. However, they refused to recommend cancellation of Hayward’s degree based on the premise that they “could not find the necessary element to establish dishonesty”.

Canterbury University has responded to questions from Shalom.Kiwi about the new evidence. A spokesperson made the following statement

All print theses are now part of the rare books collection and are digitised for use. This thesis is controversial and has in the past caused significant distress to members of the Jewish community. As a consequence this Master’s thesis is not digitised and is kept in a closed storage space which is accessible only by library staff. It would need to be requested and can be accessed only in the secure Reading Room. It cannot be issued, borrowed or taken from the library. It is bound with a copy of the report by the Joel Hayward Working Party and an addendum to the thesis from Dr Hayward in January 2000 acknowledging the thesis contains “several errors of fact and interpretation.”Canterbury University spokesperson

The Canterbury University spokesperson also admitted that the only other theses kept in closed storage are those “using objectionable material as determined by the New Zealand Censor, projects with national security implications and some with particular cultural sensitivities”, such as work describing “family violence or anorexia where individuals could be identified or Māori or indigenous knowledge that the research participants do not wish share more widely”.

Other universities Shalom.Kiwi contacted have said they also restrict access to academic work where individuals could be identified, where there are commercial sensitivities, or work which would be restricted under the Classification Act. However, there is nothing in Hayward’s thesis that would breach the privacy of any individual and nor is there content that the New Zealand Censor would find objectionable.

Furthermore, none of the other New Zealand universities that responded to Shalom.Kiwi would have knowingly awarded a degree to a student who had submitted work which was found to be “seriously flawed”, let alone award it first class honours. An Otago University spokesperson told Shalom.Kiwi that

“Research degrees [at Otago University] are only awarded after theses or dissertations are examined through robust processes involving external and international experts. Any work that was identified as being ‘seriously flawed’ through this process, and was not able to be defended or corrected, would not result in the award of a degree [from Otago University]… plagiarism or research misconduct, when discovered after the award of a degree, can lead to the degree being rescinded. Within the last 20 years this has happened once.”Otago University spokesperson

Shalom.Kiwi contacted Dr Martin Lally and Rodney Hide – the instigator and a signatory, respectively, of an open letter asserting that Joel Hayward was bullied by Canterbury University and denied free speech.

Hide, an ex-MP and current commentator, thought the restrictions placed on Hayward’s thesis were not in keeping with principles of free speech and said “sadly universities gave up on free speech some years ago.” Hide was surprised to learn that the thesis denied the Holocaust and has said he will read it himself.

Dr Lally, an ex-Economics professor at Victoria University and a current consultant, responded that it was entirely reasonable for Canterbury University to keep the thesis restricted based on the unsubstantiated claim that it “would be likely to be destroyed if it were loaned out”. When asked if he thought Hayward deserved the A+ grade for concluding that Nazis did not systematically exterminate Jews, he replied that “I don’t have the requisite level of knowledge in this area”. When asked if he thought it would be appropriate for a New Zealand University to award a degree claiming that the Earth was flat, he responded that “it may turn out to be the new truth or eventually demonstrated to be the nonsense”.

While Dr Lally will have his reasons for claiming not to know if the world is flat, the actions of Canterbury University raise serious questions. They are the only ostensibly ‘reputable’ University in the world to award an A+ to a Holocaust-denying thesis. While the thesis remains in the library, it is effectively censored, even though the thesis does not meet the requirements for censorship.

These contradictions highlight the quandary that has arisen for an institution which has chosen to stand by a bad decision rather than admit a mistake and put things right, even in the face of new evidence. Perhaps it is time for Canterbury University to consider rescinding that seriously flawed degree.