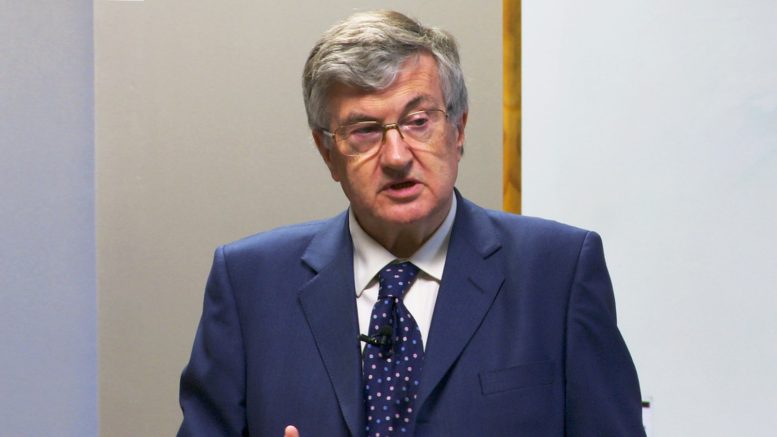 We are now living in the era of post-truth and alternative facts, the internet is awash with unsupported opinions – some absolutely outrageous and many completely unfounded… This is a movie that says truth is important and really matters and you can find out about it and you can nail people’s lies. It’s an important service the movie performs.Professor Emeritus Sir Richard Evans

As part of a series sponsored by The Department of History and Art History at the University of Otago, Cambridge University’s Regius Professor Emeritus Sir Richard Evans gave a public lecture last week entitled, The Holocaust on Trial: Reflections on the Irving-Lipstadt Trial and the film ‘Denial’.

The movie ‘Denial’,  in which Sir Richard is played by John Sessions, is based on a real life high court trial that took place in London in 2000. Notorious Holocaust denier, David Irving, brought a libel action against historian Deborah Lipstadt and her publisher, Penguin books, alleging that Lipstadt had defamed him by saying he was a Holocaust Denier, thus damaging his career as a writer and impeding his livelihood. By filing his case in an English High Court, the burden of proof lay with the defendant, rather than the plaintiff, in contrast to the US.

With the help of two research assistants over a three year period, Evans produced a detailed 740 page report on the English and German writings of Irving. Although the movie presents part of Evans’ evidence in a dramatic 3 minute segment, the reality was entirely more tedious, lasting 28 hours over 10 days, in which Irving (who represented himself) cross-examined Evans by traversing his report line by line.

Evans was ultimately able to help the defence prove incontrovertibly that Irving had deliberately falsified, distorted and misrepresented historical evidence. The judge found Irving to be a “Holocaust denier, anti-Semite and racist who had deliberately manipulated historical evidence”, and ordered him to pay more than £2m in legal costs. The 330 page judgement has been described as ‘the most savage judgement ever dumped on an English plaintiff in a high court’.

New Zealand media have reported Evans’ appearances and discussed the Irving trial, the continuing Holocaust denial on social media, and the importance of truth. Conspicuously few journalists have mentioned the report that Sir Richard wrote for submission to the Canterbury University enquiry, assessing a Master of Arts thesis written by Canterbury University student, Joel Hayward, in 2000.

Hayward referenced Irving numerous times in his 360 page master’s thesis, supervised by Dr Vincent Orange, entitled ‘The Fate of Jews in German Hands’. It concluded that “the weight of evidence supported the view that the Nazis did not systematically exterminate Jews in gas chambers or have extermination policies as such”.

Evans argued that Hayward’s thesis was ‘a thoroughly tendentious, biased and dishonest piece of work’ that clearly constituted Holocaust denial. He recommended that Canterbury University strip Hayward of his master’s degree.

The Canterbury Working Party eventually rejected the “perverse and unjustified conclusion” of Hayward’s thesis. Astonishingly, that same committee refused to cancel Hayward’s degree based on the premise that they “could not find the necessary element to establish dishonesty”. While the Canterbury Working Party argued that Hayward’s thesis was not worth an A+, they suggested that the supervisor should  have returned the thesis to Hayward with an instruction to rewrite it. Both the supervisor Professor Orange and the external examiner Professor Jensen  from Waikato University refused to alter their A+ assessment of the thesis. Canterbury remains the only reputable University in the world to allow a Holocaust denying thesis to remain in their library.

Further, a group of 63 people who felt that Hayward had suffered from a “general climate of hostility” wrote an open letter to Canterbury University seeking “appropriate remedies to Dr Hayward”, and supported the decision to award a degree for Holocaust denial.

There is, however, new evidence which suggests Hayward was dishonest, and evidence in 2003 was uncovered by the Listener magazine also showing Hayward was deceptive. In spite of this neither Canterbury University, nor the 63 who supported Hayward have commented further.

Hayward went on to complete a Doctoral degree, also at Canterbury University, and then joined the History Department of Massey University as a Lecturer. He has since become Chair of the Department of Humanities and Social Sciences at Khalifa University in Abu Dhabi, and is now a Shaykh. Evans described Hayward as “one of these people who morphs rather strangely…” 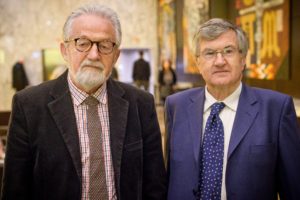 Emeritus Professor Dov Bing (pictured on the left, with Sir Richard on the right) was the New Zealand academic to raise concerns about Hayward’s thesis. Bing was awarded a lifetime membership award from the TEU for his defence of academic freedom in opposing holocaust denial – against Hayward and others in New Zealand. Bing and Evans met for the first time last week in Auckland, where Bing asked Evans what he thought of Hayward’s career progression. Evans, citing other academic frauds that took years to uncover, responded that academics tend to be trusting and are reluctant to believe that other academics would not have serious standards of scholarship.

The Irving trial and the Hayward case both raise serious questions over scholarship, truth and accountability. Evans described Irving’s work as “of no academic interest, although popular“ and Irving was found to be dishonest through a court of law. However, the more ‘academic’ Hayward was subject to an internal university enquiry which should have upheld standards of academic rigour and provided a safeguard from the distortion of truth but instead provided institutional cover for holocaust denial.

The movie ‘Denial’ was a celebration of truth over lies. Evans believes it is possible to generate knowledge about the past that is relatively reliable – “in the end I still believe you can establish the truth and that ultimately people are going to listen to you.”

People will also listen to ‘alternative facts’. Irving, Hayward, and their ilk now have the internet at their disposal and social media tools to spread their pernicious lies (Irving has also used his website to caricature Bing as a “beatnik”).  This democratisation of information with few gatekeepers places an even greater onus on the custodial integrity of educators at schools and universities.

Freedom of speech allows for people like Irving to publish their books and it allows for people like Lipstadt and Evans to highlight their maleficence. However, universities should be places where truth prevails and minimum standards of scholarship and ethics are taught, not where holocaust deniers enjoy imprimatur.