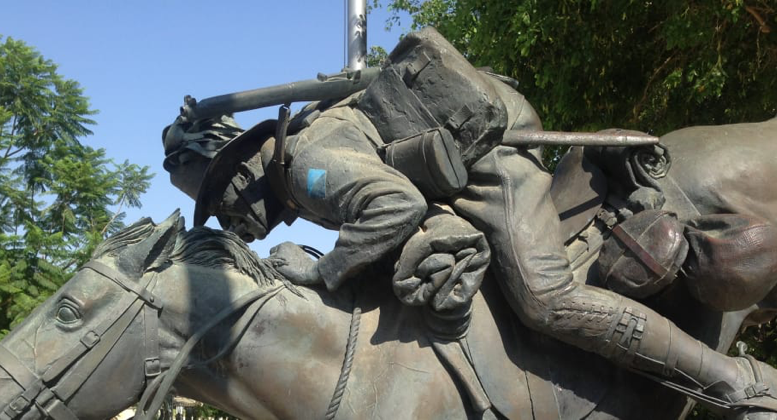 Beersheba is a town that few New Zealanders will be familiar with.

It sits on the edge of the Negev desert in southern Israel, about 75 kilometres south west of Jerusalem.

On Tuesday, a small group of New Zealanders will join a large group of Australians to watch a re-enactment of an historic charge by the Australian Light Horse brigade exactly 100 years ago at Beersheba.

The attack on Turkish troops was a turning point in World War I, and is a revered part of Australia’s military history.

From this point on in the desert war the Turkish forces and their German allies were in retreat.

The famous charge by the 4th Australian Light Horse is regarded as the last great cavalry charge in history.

What is less well known is that it wouldn’t have taken place had it not been for the skill and bravery of the New Zealand Mounted Rifles.

After two failed attempts to break the Turkish defensive line between Gaza on the coast and Beersheba 43 kilometres inland, the newly appointed commander of the Egyptian Expeditionary Force, which was spearheaded by Australian and New Zealand mounted troops, devised a plan to take the town of Beersheba.

General Allenby’s aim was to outflank the Turko-German forces and attack the trenches protecting Gaza, from behind.

Compared to the frontlines at Gaza, Beersheba was relatively lightly defended as the Turks were convinced (partly due to a British officer deliberately dropping a note saying an attack on Beersheba was impossible due to a lack of water) that a third attack would be made directly on Gaza.

The Anzac and British troops carted most of their water with them and moved at night to stay concealed from German aircraft.

It was a huge logistical task but by the morning of 31 October they were ready and the attack on Beersheba began.

At first, it went well; the Turks in outlying positions were caught by surprise.

But a large hill which overlooked the plain in front of Beersheba needed to be taken before mounted troops could approach the town itself.

The machine guns dug in on the hill known as Tel el Saba would have mown down horsemen in minutes.

The job of capturing Tel el Saba was given to the New Zealand Mounted Rifles. It was defended by 300 Turks who were now well prepared.

The attack started at 9.10am but progress was slow and casualties mounted.

It took nearly six hours of fighting before the Auckland Mounted Rifles managed to capture the first enemy position. Two or three machine guns were taken, along with 60 prisoners.

The machine guns were turned around and used to good effect on the Turks.

The “Aucklands” (as they were known) were joined by the Wellington Mounted Rifles and with bayonets fixed they charged up the hill on foot.

Fleeing Turks were shot as they ran.

25 Turks were killed and another 132 taken prisoner.

Israeli military historian Avi Navon told Newsroom “all the advantages lay with the Turkish troops. They were fresh, had the high ground and plenty of firepower. The only advantage the New Zealanders had was bravery.”

“The cavalry charge and the Australians are much talked about but really the New Zealanders deserve a lot of credit,” said Navon.

The Aucklands had cleared the Tel but there was a big problem. Dusk was approaching and ANZACs had run out of time to attack the town.

It had been a vital part of the plan that Beersheba fall on the 31st because without the water from its wells most of the horses (some had been without any water for 48 hours) and probably most of the men would perish.

In one of the biggest military gambles in history, Australian Brigadier General William Grant ordered 500 light horsemen of the 4th and 12th Regiments to charge at the unwired Turkish trenches.

There was no time to assemble the seven to eight thousand soldiers in the area for a concerted attack.

Australian records show that Grant gave the order personally to the Light Horse Regiment: “men you’re fighting for water. There’s no water between this side of Beersheba and Esani. Use your bayonets as swords. I wish you the best of luck.”

The Light Horse cantered towards the Turkish trenches. The Turks, expecting the Australians to dismount just before they reached the trenches (the usual way mounted rifle troops attacked) held their fire. But the Australians didn’t stop; instead they rose to a gallop and jumped the trenches before racing on to capture the town and its vital wells.

New Zealand and Australian regiments followed in behind the attack and took more than 1,000 prisoners.

31 light horsemen were killed in the charge and 36 were wounded. 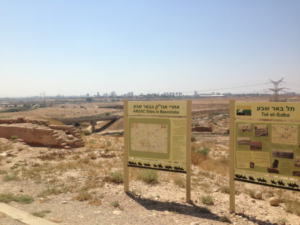 There is no memorial to the New Zealand troops at Tel el-Saba. They along with 33 New Zealanders are buried in the Commonwealth War Graves cemetery at Beersheba and a special commemoration service will be held there before the cavalry charge is re-enacted by 100 Australian horsemen.

Australia’s Prime Minister, Malcolm Turnbull, and Opposition Leader Bill Shorten will attend – such is the importance of the event to the Australians.

New Zealand will be represented by Governor-General Dame Patsy Reddy.

Compared to Gallipoli or Passchendaele, New Zealanders’ knowledge of the Palestine campaign remains low. The former were catastrophes, the latter a series of stunning victories.

Later in the day a smaller service will be held at Tel el-Saba (now part of a National Park) to recognise the role of the New Zealand Mounted Rifles in the famous battle.

There is no memorial to the New Zealand troops at Tel el -Saba despite their heroic deeds. A defence force spokesman told Newsroom earlier this year that it “wasn’t New Zealand’s style to build great monuments,” and instead the department had plans for an app so visitors could take a “virtual tour” of the site.

This contrasts with the Australians who, using mainly private money, have built a memorial park in Beersheba which houses a magnificent bronze statue of a light horseman hurdling the trenches. They have also been the driving force behind the building of an ANZAC museum on the boundary of the cemetery, which will be officially opened on Tuesday.

There is a memorial to the NZMR much further north in the grounds of a school at Ness Ziona. A stand of beautiful Kowhai trees shade a plaque with the names of 50 NZMR soldiers killed during the battle of Ayun Kara which took place two weeks after the victory at Beersheba.

It isn’t easy to find and nor is a smaller memorial near what was the village of Rishon le Zion where the New Zealanders rested after Ayun Kara. It is on the edge of what is now an Ikea store carpark.

This was the most significant battle New Zealand soldiers were involved in during the campaign. They fought it on their own and again showed remarkable bravery to rout the Turks with full frontal bayonet charges. At Ayun Kara, 800 New Zealanders overcame 1500 Turks.

The war diary of the Auckland Mounted Rifles recounts how the regiment met Jewish people for the first time at Richon le Zion.

“One member of the community was a brother of Rabbi Goldstein, of Auckland. The joy of these people at being freed from the tyranny of the Turks was unbounded. They treated the New Zealanders most hospitably—an exceedingly pleasant experience after the tremendous effort they had just made, and the harsh hungry times spent in the south with its hostile Bedouins.”

The NZMR’s connection with the Jewish people is being recognised in Auckland on Tuesday.

An olive tree – a symbol of peace – will be planted at Auckland Grammar School in memory of those who fought and died in the 1917 Palestine campaign.

Several of the soldiers killed at Beersheba were Grammar old boys.

Later in the day, native trees donated by the New Zealand Jewish community will be planted at Sir Douglas Bader Intermediate School in Mangere.

“The New Zealand Jewish community felt it was important that they help create this lasting tribute.”

The battles at Beersheba and Ayun Kara helped turn the tide against the Turks and when Allenby’s troops entered Jerusalem in December 1917, the Ottoman Empire’s 400 year reign over the holy city was finished.

The role of the Anzac troops in paving the way for the establishment of the Jewish state of Israel is well recognized by the Australians.

Bill Shorten described it as having “ great significance to both nations.”

Compared to Gallipoli or Passchendaele, New Zealanders’ knowledge of the Palestine campaign remains low. The former were catastrophes, the latter a series of stunning victories.

After 100 years, it’s time for the men of the New Zealand Mounted Rifles to be recognised as the war heroes they truly were.

Source: Newsroom. reprinted here with permission. Mark Jennings is co-editor of Newsroom. He writes about the media industry, business, and tertiary education.

ANZACs secured Palestine for the Allies