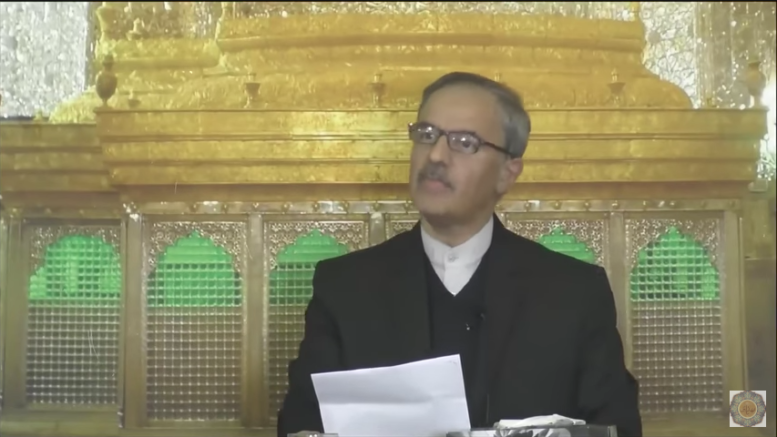 A disturbing hate-speech-laden video has emerged, from a mosque in Pakuranga, Auckland, which promotes Holocaust denial and calls for the destruction of Israel.

The video, from June 2017, is from the Islamic Ahlulbayt Foundation of New Zealand event, held in Auckland in commemoration of Al-Quds day. This commemoration was described in the video by the Wellington-based Iranian diplomat as “a symbolic day of unity of Muslims against Israel” and by Sheik Shafie as a chance to “deal a powerful punch to the mouth of the cancerous tumour known as evil Israel”. In the video, the Sheik also said:

“We all know that the whole existence of Israel is fabricated around the question of Holocaust. And the Holocaust is that phenomenon that in itself is not allowed to be investigated and found out what it is. I have quite a few questions in this regard. First, if this Holocaust took place in the second world war in Europe then why not distribute the documents concerning this and let people see for themselves…. It all shows that there is a big scheme and conspiracy to establish the bigger scheme of occupying from the Nile to the Euphrates, which is their final objective.”Sheik Shafie

The speakers not only denied the Holocaust but they also called for the destruction of Israel. Sheik Shafie quoted Ayatollah Khomeini, saying “if Muslims get together and each one pour a glass of water over Israel, the flood will wash it away”. Mr Derhami said that Israel is a “cancerous tumour” that had to be “surgically removed”, and the Iranian diplomat said the “sinister phenomena of terrorism and extremism in the [Arab] region” are “fuelled and fanned by the enemies of Islam and the Zionist circles.”

When asked by Fairfax journalist Tony Wall if such inflammatory speeches could fuel radicalism in the Muslim community, Mr Ghahremani said:

“If it’s spoken in public places yeah, you’re right. But it was a small, private gathering that happens once a year. This year they make a mistake to shoot a film, to put it on YouTube.”Iranian Diplomat Mr Hormoz Ghahremani

Only one week before that statement was made, the United States released a report in which the State Department said that the Islamic Republic of Iran was the world’s “foremost” state sponsor of terrorism. This is because of the strong support the Iranian government gives to “Hezbollah, Palestinian terrorist groups in Gaza, and various groups in Syria, Iraq, and throughout the Middle East”. That week was also the 23rd anniversary of bombing of the Jewish community centre in Argentina, which is widely believed to have been perpetrated jointly by Iranian operatives and Hezbollah terrorists.

Coming just one year after a New Zealand Muslim Imam was exposed for misogynistic and antisemitic comments, this video is disturbing.  Such inflammatory rhetoric and demonisation facilitates a pathway to radicalisation, which can ultimately manifest in violence. The New Zealand Jewish Council condemned the video, with Juliet Moses saying:

“New Zealand leaders must condemn Holocaust denial and calls for genocide in the strongest possible terms. The Jewish community fears what such speech can lead to and is very concerned about the possibility of radicalisation in New Zealand mosques and elsewhere.”Juliet Moses

In the video, the Iranian diplomat also expressed his “gratitude and appreciation to [the] NZ government for playing an active role in co-sponsoring and approving the United Nations Security Council resolution 2334.”

New Zealand’s then Minister of Foreign Affairs, Murray McCully, pushed through the controversial anti-Israel resolution, in December 2016. Earlier, New Zealand also helped push through another Security Council resolution which eased sanctions on the Islamic Republic of Iran following the signing of the JCPOA . In January, 2017, New Zealand removed the requirement to register with the government before doing business with the Islamic Republic of Iran.

Co-director of the Israel Institute of New Zealand, Prof Paul Moon, said that “we cannot let Holocaust denial and calls for another to go unchallenged in 2017 New Zealand… The comments [in the video] are made more absurd by the fact that Iran is considered the foremost state sponsor of terror in the world.”