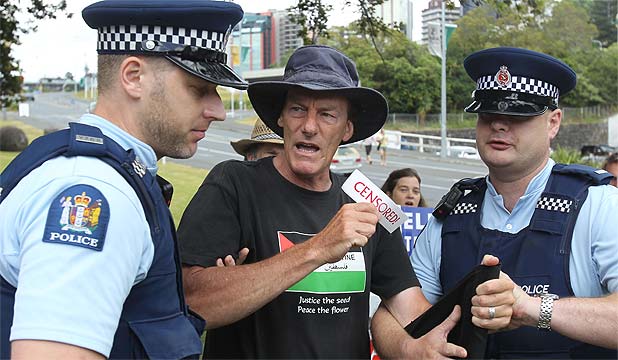 Last week, John Minto, perpetual protestor and anti-Israel obsessive, sent an open letter to news editors, journalists and Members of Parliament, entitled “Don’t be caught out by ‘the trick’”.

For reasons best known to him, Minto decided it was timely to share an extract from a 2002 interview – yes, 17 years old – with Jewish Israeli Shulamit Aloni who had, prior to the interview, been a Cabinet Minister in Israel and is now deceased.

When asked to comment on the fact that often people are called antisemitic when there is dissent expressed in the United States against policies of the Israeli government, she responded that:

Well, it’s a trick, we always use it. ..They are talented people and they have power and money, and the media and other things…. And they are not ready to hear criticism. And it’s very easy to blame people who criticise certain acts of the Israeli government as anti-Semitic, and to bring up the Holocaust, and the suffering of the Jewish people, and that is to justify everything we do to the Palestinians.

Minto then asserted that in New Zealand, “the trick” is used to silence criticism of Israel and that newspaper editors, journalists and Members of Parliament are intensely pressured whenever they speak out against Israel by groups like the Jewish Council, the Israel Institute, the Israel Parliamentary Friendship Group, and the Israeli embassy.

These days, no one pays Minto much attention, if they ever did, and it’s unlikely anyone will take this letter seriously. It’s tempting to ignore it, but we decided it’s worth unpacking it to peer into Minto’s monomaniacal mind and understand how what Lord Rabbi Sacks calls the “cognitive failure” of antisemitism works.

How many ways is this letter antisemitic? Let us count the ways.

First, we note that Minto thinks that he is better able to determine what is antisemitism than Jewish people. We believe that Minto would not dare to tell Muslims, Māori or gay people that what they consider to be prejudice towards themselves is actually not. Indeed, it is well accepted and understood by progressive people that minority groups have the right to determine and define prejudice towards themselves according to their lived experience. Denying Jewish people a right that every other minority group has is antisemitic.

Perhaps anticipating such a charge, in order to give himself cover and legitimise his antisemitism, he’s quoted a Jew. Minto has trawled the internet and – eureka! – found a 17 year old interview with a 74 year old Jewish woman, an interview frequently pulled out by antisemites because it’s the “smoking gun” they’ve always hoped for and confirms their wildest suspicions. Amplifying the voices of Jews on the margins and marginalising the voices of mainstream Jews is a favourite tactic of antisemites. Notably it is also adopted by Labour MP Duncan Webb, who lives in Christchurch just as Minto does, and advocates for the boycott divestment and sanctions campaign (BDS). According to Webb, BDS can’t be antisemitic because “Jewish groups” like the inaccurately-named Jewish Voice for Peace support it. (JVP does not actually support Israel’s right to exist as the Jewish homeland.)

Jews, like any other minority group, are not homogenous. There will always be differences of opinion and experiences. We are not all programmed to think the same way, despite what Minto might think. Like any other historically oppressed people, there will be those in the group on the very fringes who have internalised the tropes and stereotypes historically applied to them, as Aloni appears to have. And there will always be bigots like Minto who will be only too willing to tokenistically exploit that internalisation for their own ends, as the proof that justifies their bigotry. Racial tokenism towards Jews is in itself antisemitism. That’s the second strike from Minto.

But Minto has gone one step further with his antisemitism. Not content with refusing to accept that Jews – such as the highly respected representative organization of the Jewish community the Jewish Council – are best placed to determine what is and isn’t antisemitism, and tokenising a dead Jew, he’s gone for the trifecta! He has also suggested that accusations of antisemitism are an orchestrated campaign to smear anybody who criticises Israel, using the Jews’ money and power that we all know they have (wink wink).

This is a scurrilous accusation, one that has become common in the UK under Jeremy Corbyn’s leadership of the Labour Party. It directly invokes the antisemitic conspiracy theory of an omnipotent shadowy cabal of Jews conniving to control and manipulate the world for their own nefarious ends. It inverts the oppressor and the victim, so that rather than Jews being the vulnerable victims of antisemitism, the person accused of perpetrating it is portrayed as the victim of a smear campaign. And it potentially has a chilling effect on the victims of antisemitism, because if they raise their concerns, they risk compounding the antisemitism, by providing confirmation in the conspiracy theorist’s warped mind that indeed the powerful, pernicious Jews are at it again. If Minto reads this article, he will no doubt say “see, I told you so!”.

The fact is that no serious commentator or Jewish organisation ever says that criticising Israeli policies is in and of itself antisemitic. Israelis – both Jews and non-Jews – do it all the time, which is vital in a robust democracy. It is crucial not to trivialise and weaponise antisemitism, and for this reason Jewish (and many non-Jewish) thinkers and commentators focus on, and frequently discuss, differentiating between antisemitism and criticism of Israel/support for the Palestinians.

It is quite possible to criticise Israeli policies and advocate for the Palestinians without being antisemitic, as politicians and journalists often do, by:

Antisemitism takes many different forms and, while Minto graciously acknowledges in his letter the “monstrous evil” of the Holocaust, he displays a myopia about the prevalence of it on the far left – those like himself who think they are incapable of racism – in the demonisation and delegitimisation of the world’s only Jewish state and the double standards applied to it.  Minto displays a pathological and delusional fixation on Israel, a country half the size of Canterbury, that cannot be explained simply as concern for Palestinians, and that is disproportionate to any other state in the world, including those whose human rights records are far, far worse. This qualifies as antisemitism, in consequence if not in intent, although as far as we are aware Minto has never been publicly accused of such.

Until now. If there was any doubt, his “don’t be caught out by ‘the trick’” caper has well and truly dispelled it. THAT is the smoking gun.