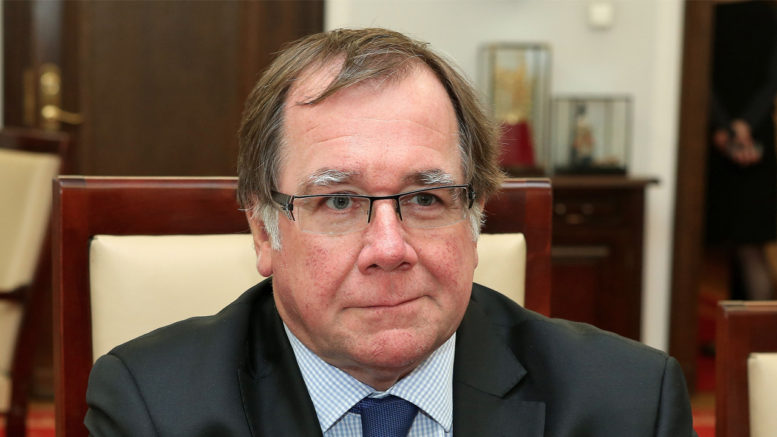 It appears that the persistent criticism of McCully’s sponsoring of the anti-Israel UN Resolution 2334 has hit a nerve. On 12 January 2017 he published a defence of the move in The New Zealand Herald, in an opinion piece titled “Vote to rebuke Israel only option in push for peace”.

Unsurprisingly, it contained a continuation of the light-weight analysis, one-sidedness and wishful thinking that we have come to expect from our Foreign Minister.

McCully denies the charge made by critics that the resolution predetermines the outcome of any negotiations, without offering any real counter-argument. UN resolution 242, passed in the wake of the 1967 war, was specifically worded so as not to perpetuate the 1949 Armistice Line as the final borders in order to encourage negotiations. McCully seems to not understand that Israel’s ability to negotiate must be impaired by the new resolution – the Security Council has now declared any land over the 1949 Armistice Line to be “Palestinian Territory”. Why would Palestinian negotiators ever move back from that position? Why would Palestinian leaders enter negotiations when they can use the UN to pass resolutions like this one?

Again, without offering a counter-analysis, McCully denies that the resolution affects the rights of Israelis to access certain religious sites. This is an absurd statement if one reads the text of the resolution, which declares the Jewish Quarter of Jerusalem, the Western Wall, and Judaism’s holiest site, the Temple Mount, to be part of “occupied Palestinian territory”. Resolution 2334 potentially criminalises Jews living in the ancient Jewish Quarter, rebuilt after the destruction during the years of Jordanian occupation (1948-67) and makes it illegal for Jews to pray at the Western Wall, the surviving structure of the Second Temple. Did Prime Minister Bill English and Cabinet truly support this?

Is McCully not aware of ‘moderate’ Palestinian Prime Minister Mahmoud Abbas’ statements that the State of Palestine will not allow a single Israeli to live under their rule? A future Palestinian State will be Judenrein, just like when Jordan controlled the area. How does McCully intend to ensure access to Jewish holy sites for Jews?

McCully attempts to pass critics off as hard-liners, claiming (falsely) that “the focal point for much of the critics’ anger is the direct call for a halt to the settlements”. In fact, many of those who object to the Resolution also happen to be critics of the settlements. The true focal point for the critics’ anger is the danger to the survival of Israel through the imposition of indefensible borders and the assault of 2334 on Jerusalem, by designating the heart of it a settlement and thus criminalising residents. The resolution goes well beyond simple criticism of the current government’s settlement policy and this is where the anger lies.

Another focal point for the critics’ anger is the failure of the resolution – and McCully – to recognise the role of Palestinian rejectionism, violence and incitement in the current stalemate, and to hold only one side – the Israelis – to account for their actions. McCully declares in his NZ Herald justification that the resolution, “condemns the obstacles to a negotiated two-state solution: incitement and acts of violence and terror against civilians on all sides…”. McCully, a man who, for reasons known only to himself, refuses to use the term “terrorism” when it relates to murderous attacks by Palestinians on Israeli civilians, apparently equates the constant violent attacks by Palestinians against Israelis – stabbings, shootings, bombings and vehicle rammings – with the Israeli government’s attempts to prevent further terror attacks. He ignores the role of the Palestinian Authority in inciting these acts of terror and rewarding the families of those responsible.

In the last week, a Palestinian terrorist killed four young Israelis and wounded many others when he rammed his truck into a crowd on a Jerusalem street. The “successful” attack was met with jubilation on West Bank streets and the Palestinian Authority will pay the widow of the assailant a lifetime allowance. No condemnation for the attack has been made by President Abbas, nor by our own Minister McCully, whose claim to be vexed about violence and incitement (when against Israelis) has been shown to be little more than lip-service.

The lack of balance in the resolution is also evident in the both the rapturous reception by the Palestinian Authority and the widespread condemnation it received across the Israeli political spectrum, from many prominent left-wing proponents of the two-state solution.

McCully ended his defence with an unexpected revelation, when he explained why the resolution was hurried through in the last session of the year: “The truth is: the United States would not accept any resolution on this topic until after US presidential elections in November. The domestic politics would have been too difficult.” It is an astonishing admission, that the Obama administration knew that the resolution would lose the Democrats support before the election, so it waited until the “lame duck” period. What exactly does this say about the resolution and the “spirit of unanimity” that McCully takes cover behind, particularly in light of its subsequent bipartisan rejection by the House of Representatives?

Team Obama was not going to have their plan derailed by the Israelis or Donald Trump. Luckily, John Kerry already had that covered. In November, he spoke with New Zealand’s foreign minister, Murray McCully, about such a resolution. McCully, known for his anti-Israel leaning, was only too happy to oblige. The next day, New Zealand’s UN envoy, joined by Venezuela, Malaysia, and Senegal, picked up the baton and brought the resolution to a vote. It passed as the Obama administration originally planned, albeit a little later and with more blowback than they expected.”Huffington Post

So what really happened? Why the apparent contradiction? What mandate did McCully have – or could he have obtained in such a short space of time – and what spurred him to leap so quickly into gear to sponsor this anti-Israel resolution? What did Bill English know of any of this?

Many questions remain about how such a flawed and unbalanced resolution – and one that departs from longstanding NZ policy – can have been rushed through the Security Council with New Zealand’s connivance, and the answers are unlikely to come directly from McCully. What is clear, however, is that the legacy that McCully has sought to achieve for himself through this sorry episode will be an ignominious one.