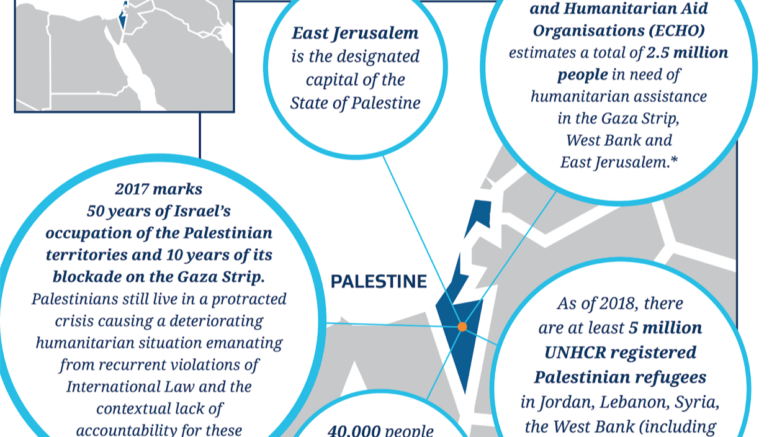 The fact sheet is on the Immigration New Zealand’s website and its purpose is to inform people about Palestinian refugees coming to New Zealand.

It is entitled ‘State of Palestine’, even though Palestine is not officially recognised as a state by New Zealand or by most western nations. In addition, the map in the document shows the whole of sovereign Israeli territory as “Palestine”.

The geography of the map is so inaccurate that it does not even include the West Bank in what it calls “The State of Palestine” – it simply replaces Israel (according to pre-1967 borders) with “Palestine”.

It notes that East Jerusalem is the designated capital of this state, but does not explain who has designated it as such. The Palestinians’ seat of government and administration in the West Bank is in Ramallah; Hamas rules Gaza from Gaza City.

The fact sheet provides a cursory overview of the Israel/Palestinian conflict that conveniently ignores facts that would throw a different light on the situation. It states that ‘Following the Six-Day War in 1967, Israel gained control of the West Bank, including East Jerusalem and the Gaza Strip’, but it does not mention that Israel won the territory in a defensive war from Jordan and Egypt, not from ‘Palestine’, as there was no such entity.

The document talks about the settlement of Israeli population in Gaza and East Jerusalem, but fails to mention that Israel unilaterally withdrew from Gaza in 2005. There have been no Israelis living there since that time.

Immigration NZ also claims that ‘the Oslo Accords, brokered in 1994 between Israel and a newly created interim self-government body, the Palestinian Authority, brought temporary peace to the region’. In fact, the Oslo accords were brokered in September 1993 and signed by Arafat and Rabin in August of that year. In April 1994 there were two suicide bombings orchestrated against Israel – hardly a “temporary peace”.

The fact sheet further claims that the period of the second intifada saw “massive Israeli repression of Palestinians…” but fails to mention that security measures were undertaken in response to the Arab Palestinian suicide bombers and other attacks that murdered more than 1,000 Israelis.

The document describes Israel’s “economic sanctions and a blockade on Hamas-controlled Gaza” but fails to mention that Hamas is a terror group and the blockade was put in place to prevent rocket attacks – as the Palmer Report to the UN makes clear. It also fails to mention the Egyptian blockade on Gaza or that Israel facilitates the transport of thousands of trucks each week into Gaza.

The “fact sheet” incorrectly refers to there being 5 million Palestinian UNHCR refugees. Rather, they are registered with UNRWA, a refugee agency devoted exclusively to the Palestinians, and which has a unique definition of refugee which enables that status to be passed down the generations – hence the huge number, which includes millions of people who were born in, and have always lived in, other places.

It is alarming and embarrassing that information provided by a New Zealand government department, can be both so wildly inaccurate and politicised.

A primary school student who knows how to use Wikipedia could do a better job. Which leads us to wonder whether in fact this “fact sheet” is a “fantasy sheet”, a projection of the department’s delusional hopes for the future. If it were ever to come to pass, Immigration New Zealand would be required to have an “Israeli refugee quota fact sheet” on its website.