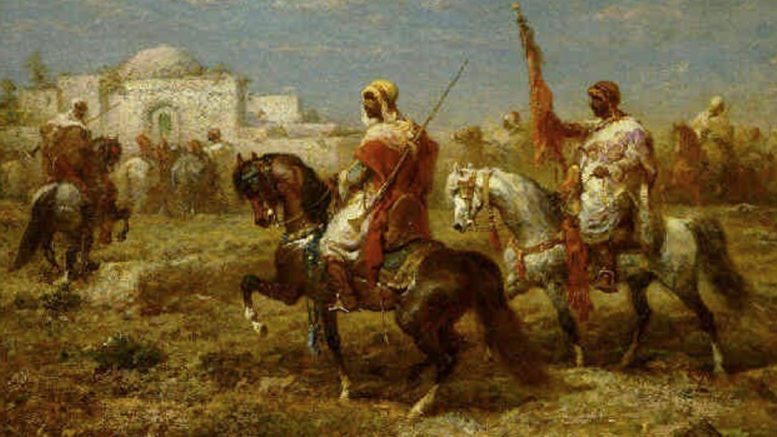 In this 4-part series, Professor Dov Bing examines the historic connections of Jews and Muslims to Israel and the more contemporary establishment of the State of Israel. Part 1 concerned the indigenous Jewish presence in the land. Part 2 examines the Arab connection to Israel/Palestine.

The Arab Historical Connection With Israel/Palestine

The Arab’s homeland is Arabia, the southwestern peninsula of Asia. It embraces the present day Saudi Arabia, Yemen, Kuwait, Bahrein, Qatar, Oman or the Persian Gulf, Muscat, and South Yemen. When in the seventh century, with the birth of the new Islamic religion, the Arabs emerged from the desert, they succeeded in establishing an empire from the Atlantic Ocean to the border of China. Purely Arab rule, exercised by the Omayyad dynasty, lasted a little over one century. The Omayyads were overthrown in 780 by the Abbasids, whose two centuries of government was increasingly dominated first by Persians, then by Turks. When the Abbasids were, in turn, defeated by the Fatimids, the Arabs had long had no part in the government of the empire – either at the centre or in the provinces. But the Arabs had one great lasting success: Arabic became the dominant language and Islam the predominant religion throughout a large part of the subjugated territories. “The invaders from the desert”, wrote Professor Philip K. Hitti, the foremost Arab historian, “brought with them no tradition of learning, no heritage of culture to the lands they conquered…”.[12]

Mecca – the holiest city in Islam

Palestine was never more than an unconsidered backwater of the empire. Damascus, Baghdad, Cairo – these were the great, at times glittering, political and cultural centres of the Moslem empire. Jerusalem, where a Moslem Holy Place was established on the site of the ancient Jewish Temple, never achieved any political or cultural status. When the Crusaders came to Palestine, they found an Arabic speaking population, composed of a dozen races, practicing five versions of Islam and eight of Christianity. “With the passing of the Umayyad Empire… Arabrianism fell but Islam continued”.[13] The Persians and the Turks of the Abbasid Empire, the Berbers and the Egyptians of the Fatimid Empire had no interest at all in the provincial backwater except for what could be squeezed out of the imperial exchequer. Some Arab tribes collaborated with the Mamluks in the numerous internal struggles that marked their rule. Like all the other inhabitants of the country, they were conquered subjects and were treated accordingly. The Ottomans even replaced Arabic with Turkish as the language of the country.

Where destruction and ruin of Palestine was partly achieved by warring imperial dynasties – by Arabs, Turks, Persians, Egyptians, Crusaders, or by invading hordes of Mongols or Kharezmians – it was supplemented by revolts of local chieftains and by civil strife. The forays of Bedouin from the neighbouring deserts grew more intense during the latter phase of the Fatimid era. It was then that Palestine east of the Jordan was laid to waste. The process went on even more colourfully under the Ottoman misrule. Bedouin raiders, plundering livestock and destroying crops, plagued the life of the farmer. Count Volney wrote in 1785:

The peasants are increasingly making inroads on each other’s lands, destroying their corn, durra, sesame and olive trees and carrying off their sheep, goats and camels… Hence arises and anarchy which is still more dreadful than the despotism that prevails elsewhere… This country is indeed more frequently plundered than any other in Syria for, being very proper for cavalry and adjacent to the desert, it lies open for the Arabs.”Count Volney[14]

There is no reason to blame the handful of Arabs who were part of the medley of peoples that made up the settled population of Palestine.[15] Thus it was that by the middle of the nineteenth century, when hundreds of years of abuse had turned the country into a treeless waste, with a sprinkling of emaciated towns, malaria-ridden swamps in its once fertile northern valleys, the once thriving South (Negev) now a desert, the population had dwindled almost to nothing.

The Arabs have never had a name for this country. “Filastin” is the Arabic transliteration of Palestine, the name the Romans gave the country when they determined to obliterate the presence of the Jewish people. The researchers of the archaeologist Edward Robinson revealed that hundreds of place-names of villages and sites, seemingly Arab, were Arabic renderings or transliterations of ancient Hebrew names, biblical or Talmudic. A substantial segment of the Arabs living in Palestine are not descended from the Mohammedan invaders of the seventh century, or the biblical Canaanites and Philistines as some would have it, but from migrants from the surrounding lands, who arrived during the last hundred to hundred and fifty years. Many of the Egyptian invaders who conquered Palestine under Mohammed Ali in 1831 remained in the country even after its reconquest by the Turks in 1840. The historian James Parkes describes this phenomenon in these terms:

Israelite, Syrian, Greek, Arab, Latin, Egyptian, and Balkan peoples have all contributed to the present population. In some cases villages are populated wholly by settlers from other portions of the Turkish Empire within the nineteenth century. There are villages of Bosnians, Druze, Circassians, and Egyptians.”James Parkes[16]