The absence of government representatives in Parliament over this holiday period didn’t stop busloads of Kiwis from travelling to Wellington in order to send them a message.

We are protesting the outrageous resolution put forward by our Government and passed at the UN last week outlawing the rights of the Jewish People to live on their own historical homeland in the Land of Israel. We are ashamed of this evil decree (Resolution 2334)  and will publicly condemn it with all who gather with us.”Nigel Woodley 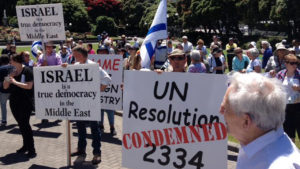 Others joined the Hastings group to fill out the approximately 200-strong crowd in the capital. In addition to this protest, more than 1,000 people have signed a letter to Prime Minister Bill English calling on him to condemn the actions of McCully. There have also been at least two other petitions against the resolution – “Keep the Israeli Embassy in New Zealand” and “Israel has my vote!”, each of which have over 1,000 signatures.

Pastor Woodley has organised previous rallies in support of Israel’s right to exist, and has been outspoken about the UN bias against Israel. In December 2015, two days after submitting a 11,865 signature strong petition to government on Israel, Woodley was struck on the head by a man uttering “utu” (revenge).

On Friday, Woodley stood under the Richard Seddon statue to speak to those gathered, flanked by two signs, one saying “Israel please forgive us” and the other saying “UN Resolution 2334 condemned”. He also said

The answer is not resolution, it’s negotiation.”Nigel Woodley 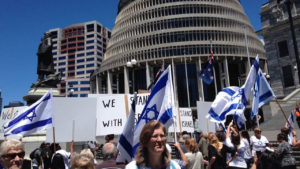 A former Honorary Consul of Israel in New Zealand, David Zwartz, pointed out that Foreign Affairs Minister Murray McCully had broken a long-standing NZ policy of “even-handedness” in the Israel-Palestinian conflict, by co-sponsoring an anti-Israel resolution with two states (Venezuela and Malaysia) that did not even have diplomatic relations with Israel.

There has been no comment from the Prime Minister or McCully since the vote was cast, but other MPs have made their views known. Green Party Foreign Affairs Spokesperson, Dr Kennedy Graham, has fully supported McCully’s stance against Israel. Labour leader, Andrew Little, and Act Party leader, David Seymour, have also commented but neither would commit to supporting or condemning the affirmative vote. Little said that it would be a weird friendship if one of its conditions was to accept uncritically everything that the other did while adding that he respects Israel’s right to defend itself against hostile neighbours. Seymour made the following statement:

I am pro Israel because I believe that democracy and individual freedom are more important than the will of the mob. As goes Israel, so goes freedom for us all. On the current topic you have to look at the resolution itself and the U.S. Ambassador’s speech to the Security Council. It is possible to be pro Israel and yet question the settlements. What is dumbfounding is why New Zealand chose to take a leading role. With the Saudi Sheep schmossle and now this, McCully can’t go fast enough.”David Seymour

These leaders may be unaware that the resolution does not simply “question the settlements”. The reality is that the resolution denies Israel legal claims to the land—including Jewish holy sites such as the Western Wall. It also reversed the United States’ 50-year strong land-for-peace formula. In the world of Resolution 2334, the land is no longer Israel’s to trade for peace.

The resolution is blatantly biased and already has had the effect of emboldening the Arab Palestinians to promote more terror. There are many reasons to suggest resolution 2334 was morally wrong and strategically damaging for peace.

The biased nature of the resolution has not been lost on many others, including the 27 organisations and 858 individuals who signed a letter to Bill English and the large number of people who have signed the online petition.

Despite voting for the resolution, the UK government has now rebuked Mr Kerry for focusing on the single issue of Israeli settlements and not the whole conflict in his latest speech. Australian Foreign Minister, Julie Bishop, has also spoken out against the bias, saying Australia would have opposed resolution 2334 because “in voting at the UN, the [Australian] Coalition government has consistently not supported one-sided resolutions targeting Israel”.

h J R
Shalom.Kiwi @ShalomKiwi @IsraelInstNZ: Where a NZ MP mimics Ilhan Omar in falsely accusing Israel of an "atrocity crime" for demolishing illegal structures within the law. @israel_advocacy has done a great video showing why this is wrong. https://t.co/Lv50EFQvHw https://t.co/U67vBQQpiW

h J R
Shalom.Kiwi @ShalomKiwi We are heartbroken that Rabbi Lord Jonathan Sacks, former Chief Rabbi of the Commonwealth, has died. His inspiring moral and intellectual leadership left an impact on the Jewish community and the wider world, and this loss will be felt deeply by many. https://t.co/j9DdKT6YDs

h J R
Shalom.Kiwi @ShalomKiwi @PouTepou: Antisemitism is alive and well in NZ. Look at this gut call, its all in the Headline. The Final Crucifixion of Jeremy Corbyn https://t.co/kNf2m6LTjJ