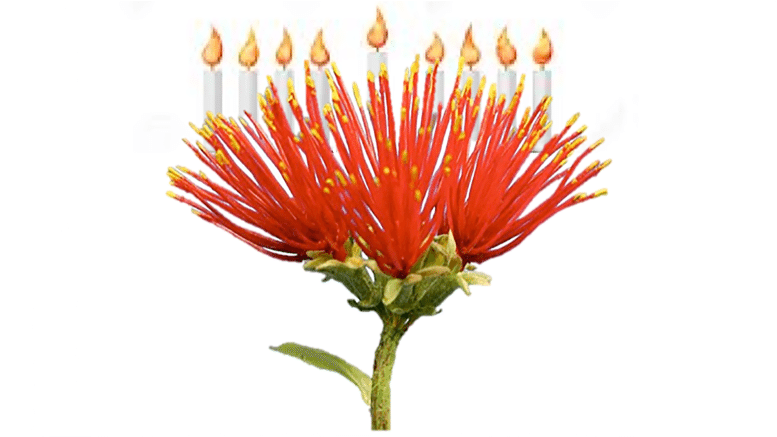 A very Happy Hanukkah from Shalom.Kiwi. The first day of the Jewish festival of lights falls on exactly the same day as Christmas this year so a Merry Christmas to you all as well.

The word Hanukkah (or Chanukah) means “rededication” and commemorates the Jews’ struggle for religious freedom from the Greek-Syrians more than 2,000 years ago (c160BC). King Antiochus IV Epiphanes had taken over the Second Temple in Jerusalem and ordered an altar to Zeus to be erected. Judaism was prohibited and pigs were ordered to be sacrificed at the altar.

The Jews revolted and took back control of Jerusalem. They wanted to light the Menorah, a seven-branch candelabrum, to rededicate the Temple but could find only one-day’s worth of the sacred oil they needed. The oil they found miraculously lasted for eight days – the time needed to prepare a fresh supply of oil. And so we light candles for eight days to commemorate this miracle. The holiday does not commemorate the military victory because Jews do not glorify war.

As the year draws to a close, we hope that this festive season is a safe one for all and a celebration of light.

Donut burger released amid Health Minister warnings of Hanukkah treat
Israeli outlets of Burger King will be offering hamburgers with donuts instead of buns this holiday season. Donuts (“Sufganiyot” in Hebrew) are a traditional Hanukkah fare, as is other oily food, commemorating the miracle of Hanukkah.  This Donut burger may prove to be as popular as the Hummus-filled donut created by Youth for Jerusalem in 2011.

While Burger King Israel is incorporating donuts into their menus, Israeli Health Minister Yaakov Litzman issued a statement calling on the public to “avoid eating sufganiyot [donuts], which are rich in fats…

If I had to say this today, I’d say: Sufganiyot out. You can eat them, of course, because it is part of the holiday’s customs, but there are alternatives.”Yaakov Litzman

There is no hint that this announcement will reduce the number of donuts bought by the IDF – in 2015 it was more than 400,000 (50,000 per day of Hanukkah). Last year, the head of procurement for the IDF said

We all want our soldiers to experience and feel the holiday atmosphere, to have a sweet, fun Hanukkah.”Gil Sandler

…at the beginning of my presidency, some critics thought it would last for only a year. But – miracle of miracles – it has lasted eight years. It’s lasted eight whole years. Nes Gadol Haya Po [Hebrew for “a Great Miracle Occurred Here” and what the letters on a Dreidel in Israel stand for ].”Barack Obama

Watch the full speech and that of Rabbi Steven Exler, Senior Rabbi of The Hebrew Institute of Riverdale and invited speaker, below.

First day Hanukkah falls on Christmas
For only the fourth time in a century, the first night of Hanukkah is the same as Christmas. The different dates are because the Jewish calendar doesn’t align with the Gregorian calendar. The International Christian Embassy Jerusalem (ICEJ) hosted the Christmas greeting from Israeli Prime Minister Netanyahu (see below) and ICEJ Executive Director Dr Jürgen Bühler said

“This indeed is a season when both communities can celebrate the triumph of light over darkness. And this timely display of solidarity shows once more that Israel is a country where religious freedoms are not only safeguarded but even encouraged” – Dr Jürgen Bühler