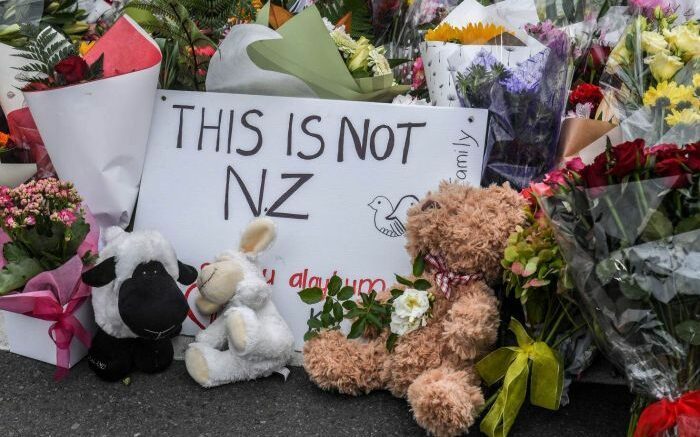 Amid the thousands of flowers piled high outside a Christchurch mosque attacked by a white supremacist on March 15, a rabbi knelt down recently to lay a stone of remembrance on behalf of New Zealand’s Jewish community. It featured the words “Salaam,” “Shalom” and “Kia Kaha” — a phrase by the indigenous Maori people of New Zealand that means “Stay strong.”

The rabbi was Mendy Goldstein, co-director of Chabad of New Zealand. “We cannot overestimate the value of every hug, every gesture, every hand extended in support,” he told Chabad.org News after the ceremony.

Goldstein was part of a delegation of local Jewish community members who travelled to Christchurch, on New Zealand’s South Island, last week to help console and support a bereaved Muslim community still reeling from the massacre of 50 worshippers at the Al Noor Mosque and Linwood Islamic Centre during Friday prayers.

Juliet Moses, spokesperson for the New Zealand Jewish Council, was also part of the delegation. “It was hard and emotional — at that time, they were still waiting to bury their loved ones, which was causing much anguish,” she told Haaretz via email this week. However, she noted that the visit was “strangely uplifting as well, because we were welcomed with warmth, grace and gratitude.”

Although there had been interfaith ties between the Jewish and Muslim communities, including visits to each other’s synagogues and mosques, before the massacre — which New Zealand Prime Minister Jacinda Ardern called one of her country’s darkest days — overall the communities tended to live mainly separate lives.

But the attacks have galvanized a new level of connection — and a shared sense of vulnerability: Following police advice, New Zealand’s synagogues were closed for the first time ever on the Shabbat of the attack.

“If there’s anything good that can come of this atrocity, it’s that it will bring our two communities closer together and that, importantly, we work together to defeat the terrible scourge of white supremacy,” Moses wrote.

Umar Abdul Kuddus, a lawyer from Auckland and Muslim youth leader, was among those who met with Moses and others in Christchurch. “It was heartwarming to see Jewish community leaders and rabbis coming and embracing us, praying with us and sharing words of love and support,” he told Haaretz, also via email. “While I was in Christchurch, I personally met a few people from the Jewish community and I was thankful for their love and support in this tragic time.”

Kuddus continued: “Regardless of race or religion, it is our Islamic belief that we are all brothers and sisters. The fact is that white supremacists would [win] in their evil ideology if we do not come together and unite as a community. I believe both our communities’ representatives need to have a serious dialogue as to how to put differences of religion aside in order to focus on humanity.”

New Zealand’s Jewish community has been fundraising to offer financial support to victims of the mosque attack and the local Muslim community. It has also partnered with the Jewish community of Pittsburgh — where a white supremacist attacked the Tree of Life synagogue last October, killing 11 worshippers — and the American Jewish Committee.

New Zealand has seen an outpouring of unity and condemnation of hatred following the March 15 massacre, which made a speech at an anti-racism rally in Auckland last Saturday especially jarring.

Ahmed Bhamji, a leader of the Masjid e Umar mosque in Auckland, said he suspected that Mossad might have funded the attack. “I stand here and I say I have a very, very strong suspicion that there’s some group behind [the shooter], and I am not afraid to say I feel Mossad is behind this,” Bhamji was recorded saying.

There were about 1,000 people at the rally, yet no one, including at least one New Zealand lawmaker in attendance, called out Bhamji’s remarks.

Bhamji later doubled down on his accusation, telling the Newshub website: “Mossad is up to all these things. When I talk about Mossad, why should the Jews be upset about it? Give me an answer?”

“It endangers our community at a time of increased vulnerability and nervousness,” she told Haaretz. Moses also noted that while Bhamji’s speech had been condemned by the Human Rights Commission, the organizers of the rally and the leading Muslim body had not criticized it. However, she noted, “There has been criticism in the media in New Zealand and globally, and we have had some beautiful messages from Muslim individuals, apologizing, denouncing it, and offering their thanks for the support we have shown them.”

Kuddus also condemned Bhamji’s speech. “The statement by Ahmed Bhamji is absolutely absurd and unacceptable in such times where we are [trying] to come together as one community!” he told Haaretz. “I was horrified and offended that Bhamji made these ridiculous and hurtful comments toward the Jewish community. … I feel embarrassed and ashamed that Bhamji is seen as a representative of my community when in fact he represents one person within the Muslim community.”

Both New Zealand’s Jewish and Muslim communities have common roots as refugees and immigrants. The South Pacific nation of some 4.5 million people is home to about 46,000 Muslims (based on 2013 census figures), mostly from South Asia and Iran, with others coming in the last 20 years from war-torn countries such as Somalia, Bosnia, Afghanistan and Iraq. There are nearly 7,000 Jews in the country (the majority in Auckland and Wellington), some whose families came as refugees from Nazi Europe; more recent arrivals include Jews from South Africa.

Paul Wilton, a member of the Jewish community in Auckland who has been involved in interfaith work, told Haaretz via email that there have been several such initiatives in recent years. “These include participation in activities arranged or promoted by interfaith organizations; visiting of each other’s sacred places; joint educational programs; attendance at iftar dinners over Ramadan, and so on. My experience is that the Muslim community here tends to appreciate all overtures of friendship. Over recent days, especially, they have expressed their gratitude for the caring response of all New Zealanders, including the Jewish community.”

Moses said that before the mosque attack, her synagogue in Auckland (New Zealand’s largest city, situated on the North Island) was working on an interfaith initiative to get Muslim and Jewish women together over food and cooking. The plan is to pursue that project again, she wrote, “once things calm down.”