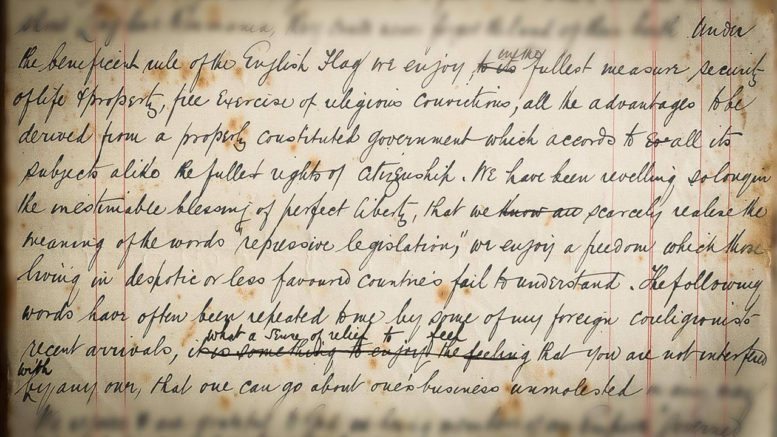 As Jewish people celebrate Passover, a remembrance of deliverance from slavery and tyranny, it is easy to forget that the freedoms enjoyed in the 21st century have been relatively recent gains for Jews. Jews were not given fundamental rights of citizenship in Britain until the late 19th century.

In the early 20th century New Zealand as a whole still saw herself as part of the British Empire. The New Zealand Jewish community has diverse origins, however there has historically been a strong tie between New Zealand Jews and England, as many of the early settlers were British. Jews in the diaspora have displayed patriotism for their countries since at least the time of Alexander the Great. Each week in synagogues across the Commonwealth, Jews recite a prayer for the Queen and our leaders. A gift of the prayer was given to Queen Elizabeth on the recent occasion of her 90th birthday by Chief Rabbi Mervis.

Whilst our modern ears are not attuned to expressions of patriotism and loyalty, the following quote from British born Rabbi Samuel Goldstein, (Auckland rabbi from 1880-1934) expresses the gratitude of a people for whom the gains of emancipation were recent and visceral.

Under the beneficent rule of the English Flag we enjoy in the fullest measure security of life and property, free exercise of religious convictions, all the advantages to be derived from a properly constituted government which accords to all its subjects alike the fullest rights of citizenship. We have been revelling so long in the inestimable blessing of perfect liberty, that we scarcely realise the meaning of the words “repressive legislation”. We enjoy a freedom which those living in despotic or less favoured countries fail to understand. The following words have often been repeated to me by some of my foreign coreligionists, recent arrivals, what a sense of relief to feel that you are not interfered with by anyone, that one can go about one’s business unmolested.”Rabbi Samuel Goldstein

Goldstein had a keen sense of civic duty and patriotism, motivated by the scriptural injunction, “Seek ye the welfare of your city, for in its welfare shall be your peace”. When the clouds of war descended upon the nation, Goldstein encouraged congregants to take up their duty with these words, “We know our responsibilities in the present crisis, we all share alike the blessing and privileges Britain’s Flag offers those who live under its shadow”. Jewish New Zealanders enlisted along with other Kiwis to fight in the First World War. 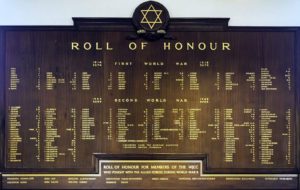 At the end of the war a thanksgiving service was held. Goldstein’s words poignantly describe the experience, the tragedy of which has long faded for people today.

For 5 years we have lived under the shadows of a war unparalleled for magnitude; a contemplation of the destruction and havoc wrought, the toll levied on human life, the rivers of blood that have flown, the overthrow of proud cities, bombing of populous and prosperous districts, the impoverishing of nations, famine and pestilence all the evils which distinguish war causes the imaginations to reel – the shadow has now lifted and disappeared, with the signing of the peace the last scene in the war has been witnessed, it is over, our anxiety and suspense are over, changed for joy and exultation. Let us pray that the peace may be permanent, not a mere scrap of paper, that under the peace all that is good and true and noble may develop on right and sure lines…”Rabbi Samuel Goldstein

Following the war, Goldstein had great hope that the newly formed League of Nations would guarantee and safeguard the full religious and civil rights of the minorities living in the newly formed states. As an ardent Zionist he rejoiced over the Balfour Declaration which he saw as an extension of Britain’s support for the Jewish people. He had great faith in Britain’s, “love of fair play, her passion for freedom, her ready sympathy with those who are striving for freedom.”

Goldstein, a passionate Zionist, passed away before the onslaught of the Holocaust and the establishment of the State of Israel. No doubt he would have felt each event keenly, as well as the fluctuation of British support for a Jewish state in the ancient Jewish homeland.

While we pause to consider the significance of Anzac Day and reflect on a tiny snapshot of New Zealand’s history, may we be spurred on to hold onto and fight for the ideals, hopes, and freedoms that the sacrifices made in two world wars represent. In the words of Rabbi Goldstein:

May we look to the triumph of good over evil, of the spiritual over the material, when the glory of a nation will consist not so much in its material wealth, as in its spiritual, moral and intellectual greatness and the purity of its ideals, the happiness of its members. This is to enjoy the blessing of peace.”Rabbi Samuel Goldstein

Finally, the following is written on the commemoration scroll of one New Zealand Jewish soldier who made the ultimate sacrifice, Sergeant K.J. Moses. Words which encapsulate our hope for humanity – May his sacrifice help to bring the peace and freedom for which he died. 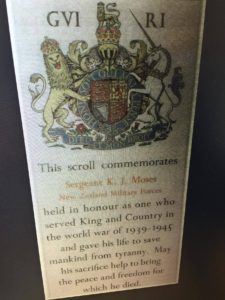