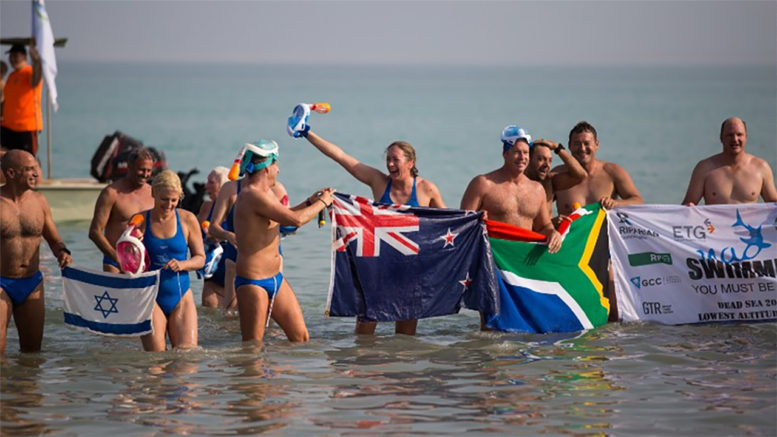 The hypersaline lake at the lowest point on Earth is where people from all over the world take pictures of themselves reading the paper while floating. It’s dangerous to put your face in the water – even a drop of the Dead Sea in your eye causes severe irritation and swallowing the brine can be fatal. However, record-breaking, Kiwi marathon swimmer Kim Chambers has joined around 30 others to become the first people to swim the 15 km width, from Jordan to Israel.

The group includes representatives from Israel, the Palestinian Authority, the United States, Australia, Denmark, the United Kingdom, South Africa and, of course, New Zealand. Swimmers were accompanied by support vessels with medical equipment and food. Swimmers took a break every half hour to drink and every hour to eat. At each stop along the 7-plus hour journey they took off their masks and were showered with fresh water. Despite the tough conditions, only three swimmers failed to finish. “It was teamwork at its finest. This is what happens when you get 28 crazy people together who think it’s a good idea to swim across the Dead Sea” said Chambers.

Not only was there teamwork required from the swimmers and support staff to accomplish the feat, there was also an international political effort required to make the event happen. Chambers said; “To be able to do something like this when you get unprecedented diplomatic support from both sides, to save this sea, which is why we’re all here today, it’s going to take a long time to process. This is so special.”

Chambers told RadioNZ she felt “like a science experiment” after the swim, with swimmers having a number of ailments after the record-breaking endeavour. The purpose of the Dead Sea Swim was to “raise awareness and understanding of the condition of the Sea and its surroundings and initiate a regional process of legislation, implementation and enforcement”. Organisers of the event say the Dead Sea’s water level has fallen more than 25 meters over the last three decades.

In 2015, Jordan and Israel signed a $900 million World Bank-sponsored project to build a desalination plant in the Gulf of Aqaba and a pipeline linking the Red Sea with the Dead Sea. The brine that is a byproduct of the process will be sent north in a 112-mile (180-km) pipeline to the Dead Sea. Jordanian officials said the two projects were crucial to providing a source of fresh water to the kingdom, which faces a severe water deficit, and to reviving the shrinking Dead Sea. Recently, 17 firms put in bids for the construction work which is expected to take three years to complete.