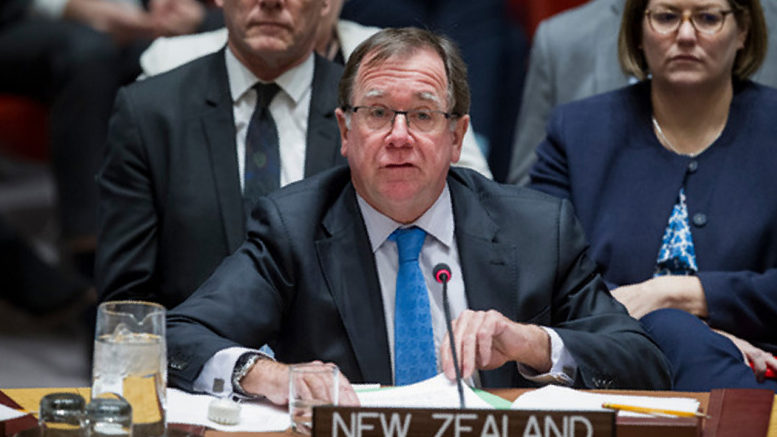 New Zealanders are often told that our country punches above its weight internationally.

Unfortunately, in the case of United Nations Security Council Resolution 2334 regarding the conflict between Israel and Palestinians, Minister of Foreign Affairs Murray McCully has delivered New Zealand an uppercut to its face.

With the United States abstaining, the Security Council passed it at its last sitting of 2016 on Christmas Eve.

You don’t have to be a fan of Jewish settlements in the West Bank to criticise the resolution.

And there are many people, like me, who support a two-state solution – the co-existence of a secure Jewish state and a viable Palestinian state – who are demoralised by this resolution, believing that it makes that outcome less likely.

The resolution goes well beyond condemning Israel for West Bank settlements. It deems all settlements beyond the 1949 armistice lines a “flagrant violation of international law”.

It declares all the land beyond those lines “occupied Palestinian territory”. That includes East Jerusalem, where Judaism’s holiest site, the Temple Mount, as well as the Church of the Holy Sepulchre, are situated.

When Israel’s Arab neighbours mounted a second unsuccessful attempt to exterminate her in 1967, Israel acquired East Jerusalem and the West Bank from Jordan. Palestinians have never had a sovereign state in the West Bank or elsewhere, although they have refused several opportunities for one.

That is not to say that they should not have such a state. It means, however, that the Security Council has purported to act as an international court, creating a legal principle in doing so.

It has pre-determined an issue that should be negotiated between the two parties. It has taken away any incentive for the Palestinians to negotiate without pre-conditions and to accept any less than what they have now been told is theirs.

It has undermined Israel’s policy of trading land for peace, successfully implemented with Egypt, for, if the West Bank is not Israel’s, what bargaining chip does she have?

It has ignored that Jews have the best legal claim to the land as the indigenous people, under the League of Nations mandate and as the victor of a defensive war. And it requires Israel to return to suicidal borders, the very ones that led to her being attacked in 1967, with no guarantee of her security.

The major obstacle to a Palestinian state is not settlements. It never has been.

It is the refusal of the Palestinian leadership, along with many Arab and Muslim states, to accept the existence of a tiny Jewish state smaller than Northland. When Israel unilaterally withdrew from Gaza in 2005 and disbanded settlements, it was thanked with thousands of rockets from the reigning Islamist group Hamas, whose charter calls for the destruction of Israel.

The more “moderate” Palestinian Authority which rules the West Bank refuses to recognise Israel and glorifies terrorism in its schools and media. Israel cannot risk that the West Bank goes the same way as Gaza or worse still Syria, on which the council has been an abject failure.

The security of the Jewish state and the survival of its people is not something that warrants merely a passing mention in a resolution under the guise of even-handedness, nor is it something that we can afford to be reckless about, as history attests.

Palestinians should have their self-determination, but not at the expense of the Jewish people’s.

As a Jewish New Zealander, I feel betrayed by our Government. Given our own shameful colonial past, New Zealand’s role in illegalising an indigenous people in their ancestral homeland has been noted by several overseas commentators.

However, all New Zealanders, regardless of religion or political ideology, should ask questions about this resolution.

How did Murray McCully manoeuvre this resolution, opaquely and urgently, on the last day of New Zealand’s two-year term on the council, and upon whose advice or insistence?

It is doubtful that the resolution was put to Cabinet, so who determines our foreign policy? Why the apparent change in policy as regards Israel? And when can we expect the prime minister to finally respond to calls for comment?

We might expect such a lack of transparency and accountability from our new besties, Senegal, Malaysia and Venezuela, but for proud puncher New Zealand, it is of grave concern.