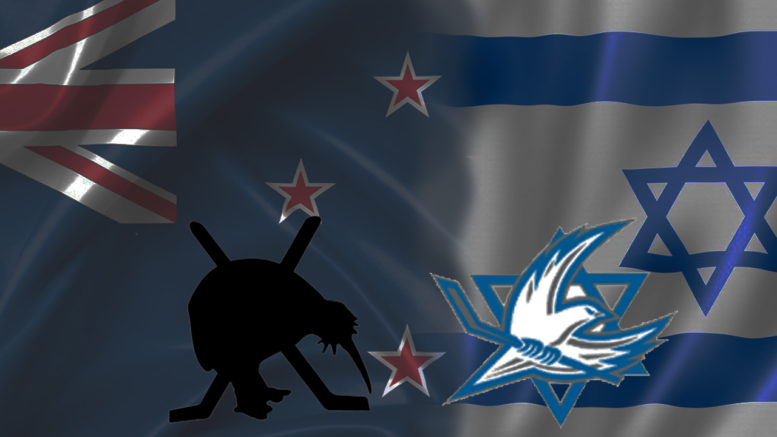 Ice hockey is growing in popularity – with 901 players for a population of just over eight million. The Israeli national men’s team is coming to New Zealand to compete in the IIHF World Championships this April against other Division II teams.

Ice hockey was introduced by immigrants from Canada in 1986 when the first ice rink opened in the town of Kiryat Motzkin, just outside the port city of Haifa. Russian immigrants in the 1980s were also early players of the new-to-Israel sport and some of these were former professionals in the Soviet Union. One of the most noted was a former defenseman for the Red Army team named Boris Mindel. Mindel and NHL Hall of Fame coach Roger Neilson developed a strong friendship coaching the sport in Israel and both have contributed greatly to its popularity. Mindel’s grandson is one of the rising stars of the sport.

The original organization was a combined hockey/figure skating association because there were not enough people at the time. The Israeli Hockey League was started in 1988 when the second ice rink (since closed) opened in the city of Bat Yam, just south of Tel Aviv. Israel has four ice rinks – Metula, Ma’alot, Tel Aviv, and Eilat. The Ice Hockey Federatino of Israel currently has thirteen hockey clubs.

Ice hockey returned in 2013 as one of the sports played played at Maccabiah Games, often referred to as the Jewish Olympics, after its first appearance in 1997. Owners of six NHL clubs helped to finance the sport so it will return for this year’s games on a special temporary rink to be built in Jerusalem’s Pais Arena – home to the Hapoel professional Jerusalem basketball team. Israel now has nine top division teams and eight in the national division.

Derek Eisler says that for the sport to develop further, “we need more community ice rinks… We will see a boom in all ice sports when they build more rinks.” Eisler played in the US junior hockey league until injury forced him to the sidelines. However, he channeled his passion for the sport into coaching the San Jose Sharks in the NHL and the China Sharks in the Asian League. He thinks Israel has a bright future in the sport because

[Israelis] do not sit in their houses. They want to go out and do things… If we can provide another avenue for that in ice sports the sky’s the limit.” Derek Eisler

The men’s U20 team played in the World Junior Ice Hockey Championship Division III tournament in Dunedin earlier this year, losing to Iceland and China but defeating Chinese Taipei in the preliminary rounds. New Zealand was in a different group but in 2016 beat out Israel to take third place.

Eisler says the senior team, to play in April, are “no longer easybeats. We are competitive and other teams know what we are all about.” In 1992 the team finished fifth at the world championships in Johannesburg and Israel has won the gold medal three times at world championships: Group D in 2000, division III in 2011 and division II, Group B, in 2013.

New Zealand teams have competed at IIHF World Championships regularly since 1995, but success has been elusive and the standard of competition very high. The upcoming tournament promises to be a not-to-be-missed event. Tickets are on sale now.