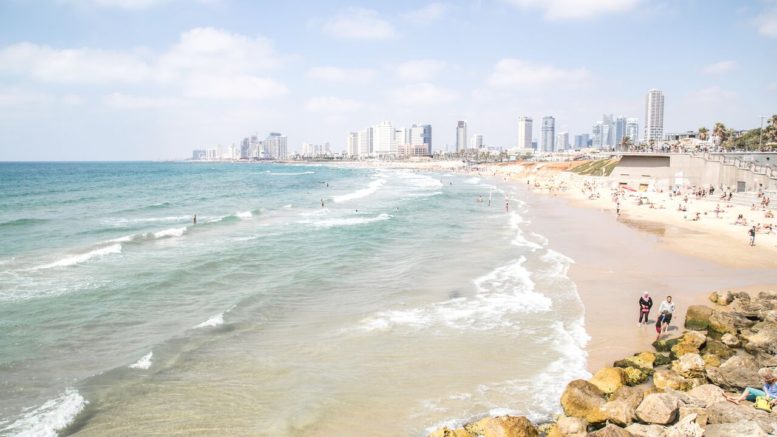 To us, Israel couldn’t have been further from the culturally divided portrayal we’re fed through mainstream media.Tim Phin

Throughout history, there has never been a more contested, conquered, and desired place on earth, than Israel. Babylonians, Persians, Ptolemaic, Romans and Britons, all reigned over Israel at times. For many, Israel is a holy place. Jews, Christians and Muslims alike consider this piece of the world to be the birthplace of humanity. What makes Israel so special? How is it so spiritually connected to so many of today’s cultures and religions? We went there to find out.

Upon arriving in Israel, we found ourselves heavily questioned by airport security. Armed guards watching our every move. Thankfully we had been here before and knew what to expect. The interrogation is unfortunately necessary, and ground crew try to make it as comfortable as possible. Tel Aviv is a sea-side city that runs up the coast from Jaffa in the south to Marinali Marina in the north.

Turquoise blue water laps over soft white sand, running down a coastline of tall buildings. Also renowned as one of the major tech hubs of the world. Tel Aviv was the birthplace of Fiverr, Similarweb and Outbrain. Google and Facebook both have innovation and development departments based in Tel Aviv. We started our Israel expedition in Jaffa, the oldest seaport in the world, home to a diverse range of cultures. Mosques next to synagogues are a testament to the surprisingly welcoming and open mindedness of Tel Avivians. 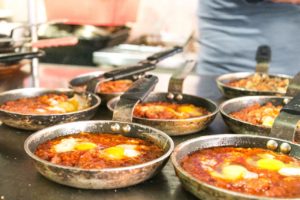 Shakshuka is the local breakfast of choice, and we were taken to Dr Shakshuka, to try these baked eggs. Shakshuka, hummus, fresh pita, is served el-fresco, a delicious and traditional morning meal in Israel.
Strolling through the quaint cobbled streets of Jaffa we come across an artisan jeweler, Ben Zion David an eighth- generation Yemenite jeweler. This traditional craft dates back centuries but is now on the brink of being forgotten forever. This workshop, museum, and gallery, is one of the last places you can purchase these unique pieces.
From old world to new, Sarona Market is also an essential visit – a more modern area of Tel Aviv. The market style mall is full of food stalls and boutiques worth exploring. 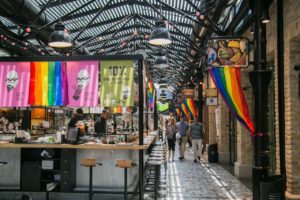 Rainbow flags decorate almost every hotel, restaurant, bar, cafe, store, shop and business. The Pride Parade is an annual event that happens every June. Over 250,000 Tel Avivian’s line the streets to celebrate this festival of love. Its in deep contrast to the separatist perception of Israel that so many people have.

Make sure you head out after dark to explore the nightlife of Tel Aviv.

Port Said, a rustic wine bar, could be mistaken for one of the hottest bars in New York or London. Another must-visit is Tidar, a collection of ‘underground’ bars, restaurants, art galleries, and even a radio station all surrounding a festoon lit courtyard, hidden behind a white wooden door. Staying at the Brown Hotel, a fantastic boutique, we were nice and close to the beach. Thousands of people lined the coast every day we were there; sunbathers, volley ballers, swimmers, cyclists, cafe-goers.

Shabbat is a traditional Jewish meal shared with friends and family at the end of the week. We were invited to Shabbat by a Jewish family that lived in Nelson, New Zealand, for over ten years. During the evening candles are lit, prays were said, and we made our way through a king-sized banquet. The wine and conversation flowed for hours. As foreigners, we couldn’t have felt more at home.

The next day we loaded up the car and headed to Jerusalem, which is an easy one-hour car trip from Tel Aviv. On the way, we stopped in for lunch at Greco a fabulous, Greek restaurant owned by our Shabbat hosts. It serves outstanding food with a fun and relaxed atmosphere. It is definitely a must-visit for those travelling through Tel Aviv. 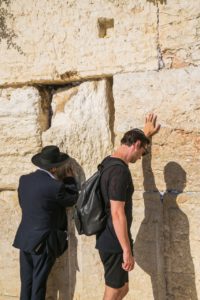 One of the most history-rich places on earth, Jerusalem doesn’t disappoint. Historical sites, ruins, and centuries old cobbled streets takes days to explore. We stayed at the centrally located Mamilla Hotel: an ultra modern, stylish accommodation. In one direction, it’s only a short walk to the Jaffa Gate in the old city, then in the other direction are the open- air markets of Machane Yehuda. Be sure to try the date-sugar- coated nuts, and the many Middle Eastern honey and nut -covered pastries.

Jerusalem itself has been captured and recaptured a staggering 44 times, which has created a fascinating city with rich cultural diversity. Ultra-religious Jews, Armenians, Christians, Catholics, and Muslims all live together within the old city. The rich historic surroundings are a stark contrast to Tel Aviv.

We visited the Western Wall and made our way to the Temple Mount, one of the most significant religious sites in the world. A gold dome sits proudly on top of an octagonal building. The rock of which the dome covers is believed by Christians to be the birthplace of humanity, and by Muslims as where Mohammad ascended to heaven. The Bible also tells of two Jewish temples, which also stood in the middle of the Temple Mount.

After exploring the old city, we took a helicopter and flew out over the desert towards the Dead Sea. Dramatic rock formations drop away into the deep blue water. We landed at one of the Dead Sea day resorts. The Dead Sea is known for its mineral- rich mud and buoyant salty water. Of course, we did the classic tourist float, as well as a bit of mudding.

One of the most unforgettable visits on the trip was to Yad Vashem, the Holocaust museum. As we made our way through the audio-guided tour, we couldn’t help but be overcome with a mix of emotions; sadness, anger, confusion, and empathy. This beautifully curated museum is a valuable lesson in compassion; something everyone, from all cultures, can learn from.

Great food is not hard to come by in Israel, and Jerusalem served us up the goods. Notable restaurants include Machneyuda, Shila, and Happy Fish. 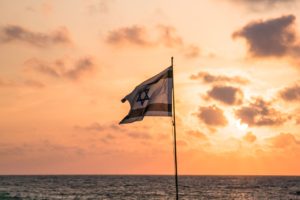 One evening we attended a light show at the Tower of David from which a short history of Jerusalem is projected onto stone ruins. It’s a beautiful yet sombre reminder of how cruel humanity can be. To us, Israel couldn’t have been further from the culturally divided portrayal we’re fed through mainstream media. Warm, welcoming, liberal, open minded Israelis love to meet and host foreigners, sharing with them the magical tales of the land’s rich history.

Our time in Israel was so much more than a holiday. It’s hard to describe the significant impact it had on us, but it emphasised the importance of cultural respect and unity. For that we are thankful.