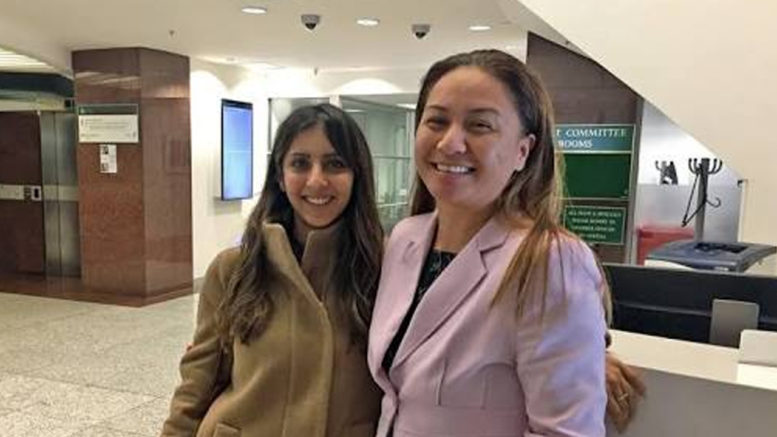 Green MPs Marama Davidson and Golriz Ghahraman demonstrated selective outrage last week, suggesting that their concern for human rights in the Middle East extends only so far as Israel can be blamed.

In the space of one week they stridently and publicly condemned Israel for protecting its border and population from Hamas-instigated violent protests, while remaining silent about a horrific chemical weapon attack that occurred over the border in Syria.

The chemical weapon attack killed at least 42 people, including many children. This atrocity elicited nothing from the self-proclaimed human rights activists, not even a tweet.

In contrast, both MPs took swiftly to social media to condemn Israel following the violence on the Gaza border, taking care in both cases to choose a source from fringe anti-Israel group Jewish Voice for Peace, perhaps as a defence against potential accusations of anti-Jewish bias.

Both MPs appear to take a sloganeering and simplistic approach to a complex international conflict.  Apparently less interested in facts than political virtue-signalling, neither appear prepared to debate or engage on such issues when challenged.

Golriz Gharahman spoke at an anti-Israel protest last weekend, where she provided a small receptive audience with emotive pronouncements, which unfortunately bore little connection with reality.

Gharahman likes to highlight her international legal experience in war crimes trials (although she has been accused of misleading the public over the precise nature of her work, which includes unsuccessfully defending Rwandan genocidaires). She should therefore presumably be well-versed in the legal definition of ‘genocide’.

However she pronounced that Israel has committed the “grossest of war crimes, crimes against humanity, and I would say genocide”.

Gharahman did not attempt to provide any evidence to back up her accusation that Israel “has committed genocide”. It is a reckless claim, a libel, that has no basis in fact whatsoever, as the rapid growth rate of the Palestinian Arab population and its increasing life-expectancy clearly confirm.

In fact the party with genocidal intentions is Hamas – a terrorist group that controls Gaza, and that Ghahraman and Davidson refuse to condemn and appear intent on implicitly defending. Should anyone be left in any doubt about Hamas’ intentions (perhaps being unaware of its leaders’ repeated statements on the matter and its own Charter) the swastika flag its members planted on the border last week in between two Palestinian flags gave a clear message.

It is also surprising that Ghahraman, who often speaks of escaping the horrors of the Islamic Republic of Iran as a refugee, does not see the irony or contradiction in the fact that Hamas is backed by that very same Iranian regime, which also often declares its genocidal intentions with respect to Israel.

An elected Member of Parliament, a refugee from Iran and a human rights lawyer, Ghahraman should know better. Her misuse of the language of human rights is a gross perversion and undermines her credibility.

Similarly, Marama Davidson, the new Greens co-leader, condemned Israel in a Facebook post for a “disproportionate and brutal violent backlash” against “protesters marching peacefully inside Gaza”. When taken to task in numerous comments for misrepresenting protesters trying to storm the border, and hurling rocks and Molotov cocktails, and firing guns as “peaceful”, and for failing to recognise the culpability of terrorist group Hamas in any of the violence, Davidson refused to engage or back up her assertions. Instead, she replied, “I stand by my words and actions. Thanks. And I won’t be dragged into the endless cycle of meaningless debate…”.

She then followed this with a stream of news and video clips featuring further “acceptable” Jews on the far fringes of the debate, including Gideon Levy.

When the questioning of her “facts” continued, she responded, “Hi everyone. Don’t get tied up in knots with the organised attempts to confuse this post….”. And when asked what her repeated mantra “peace through justice” actually means and what it would look like, she refused to answer. In the past she has said that her party’s official position is a “two state solution”, but declined to say whether that was hers personally.

From the time Marama Davidson decided to champion the Palestinian cause in her flotilla to Gaza stunt, she has displayed a distinct unwillingness to grapple with the complexities of the Palestinian/Israeli conflict.

To Davidson, it appears that debate based on fact is simply a distraction to her ideological convictions, and “meaningless”. For a university undergraduate this attitude would be thought poor, but a Member of Parliament and co-leader of a political party taking this approach should cause alarm.

Both Ghahraman and Davidson ignore or downplay the role of Hamas – the terror group that controls Gaza – in the current conflict, and Israel’s security concerns. Davidson was asked repeatedly whether she will condemn the use of violence the next time a Jew is killed by a Palestinian, which she refused to answer. Ghahraman characterised Hamas violence as “standing up once in a while holding rocks”, while the reality of Hamas’ actions against Israelis and its own people is infinitely more grim and disturbing. In doing so the Green MPs absolve the terror group of responsibility and arguably implicitly condone its tactics of endangering its own civilian population – which it brutally suppresses – while pursuing its goal of destroying Israel.

The lack of condemnation for Hamas casts doubt over how committed the Green MPs are to protecting universal human rights, or whether that commitment is limited to certain ideologically “correct” groups.

For Marama Davidson and Golriz Ghahraman, it’s a simple black and white matter of Israeli aggression and Palestinian victimhood. Sadly, their refusal to see the degree to which the people of Gaza are victimised by their own leadership, and their blind adherence to an ideological position prevents them from seeing what is really going on in the conflict and helps nobody, nor advances the cause of peace.