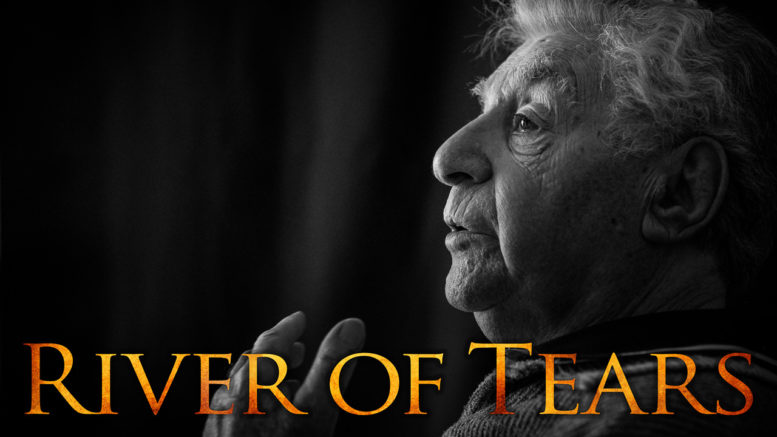 Shadows of Shoah’s new exhibition River of Tears will complete its season in the Gold Coast on 02 December and will be coming to New Zealand in 2017. Queensland’s Dr Michael Shnukal commented on the work:

The producers have obviously spent an inordinate time with each of the survivors, to have been enabled enough opportunity to hear their stories, to feel their sadness and to experience their emotions. To have been able to photograph the storytellers without posturing and to have captured in photography that which may not have been evident in a movie medium.”Dr Michael Shnukal

River of Tears is the work of NZ artist Perry Trotter and interviewer/researcher Sheree Trotter. Since 2008 they have been photographing and interviewing Holocaust survivors based in Queensland, Melbourne, Sydney, New Zealand, Israel, and USA.

River of Tears takes its name from the Hebrew Prophet Jeremiah’s Lamentation over the destruction of his people: O wall of the daughter of Zion, let your tears flow like a river day and night. The work uses kinetic elements to allude to tears, bricks and a wall, and uses the sounds of the railway system that played such a crucial role in the Holocaust. These are choreographed with excerpts of survivor stories using powerful black and white portraiture and original music.

River of Tears builds on the success, concepts and stories of Shadows of Shoah Exhibition, an exhibition launched by NZ Prime Minister John Key at a United Nations International Holocaust Remembrance Day event in 2013. Shadows of Shoah has toured art galleries, museums, and public spaces throughout New Zealand since its debut.

I wonder if Perry and Sheree have an idea of what they have done? …
They have changed the face of the “usual” depiction of Holocaust survivors from one of often-horrific scenes, to one of profound reverence and humility. Do they know how powerful their vision is? Do they know how privileged their audience is to witness these tales, that the power of the non-spoken word is deafening?”Dr Michael Shnukal

River of Tears is currently staged at Temple Shalom Gold Coast. The Shadows of Shoah Exhibition is on at the Holocaust Centre of New Zealand, in Wellington until the end of November and River of Tears will hopefully be exhibited in New Zealand next year.