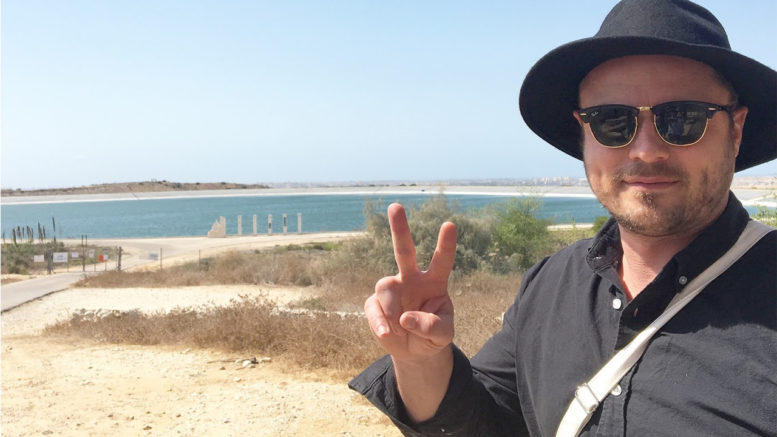 I was fortunate enough to be invited to Israel in September by the Schusterman Foundation as part of the Reality Israel program. After selling their Oklahoma energy company the Schusterman family pledged to give back by running trips to the homeland for Jews and others to promote the Israeli cause. The aims were to learn about Judaism, promote Zionism and provide networking opportunities within different industries. After filling out a number of essays and a short piece to camera I was selected with 50 other music professionals and flights from NZ were booked for a week in mid September.

A transiting stop in Germany on the way was fitting as I transferred to Berlin for the week. It was some way to understand and tie some of the abhorrent 20th century history together. I arrived at the beach front Carlton Hotel in Tel Aviv on the 4 hour flight from Europe, one of the limited ways to enter the Holy Land, given the borders are closed off on all sides. I awoke to a stunning view down the beach, comparisons to Barcelona, Miami and the Gold Coast sprung to mind. After picking the US group up from the airport we were soon on a bus to a dusty outcrop to perform our first team building exercise – herding goats. This gave us a chance to bond and also begin working in a team environment.

The first meal was to set the scene for the rest of the trip. First an entree of hummus, tomato, eggplant, fresh pita breads washed down with a sweet lemonade. Then generally followed by more char grilled veggies, chicken and lamb kebabs. And always finished with dessert – sweet pastries, rich chocolate brownie followed by sweet tea or coffee. Vicky Cristina Tapas was a highlight. We were presented by a panel of leading Israeli tech entrepreneurs, following a morning touring radio stations and hearing about the local music industry trends.

We had some free time and I joined a group of lads to learn Krav Maga –  Israeli self defence. It was a bit like rugby training as we wrestled and sweated in the late summer heat, before I joined Gab for a swim in the warm Med. Gab was a musician with Cobra Starship and now managed pop punk bands. There were some very talented musicians attending, along with artist managers, label execs, songwriters and just two promoters – the other one Justin organising the Washington wine festival – VinoFest. 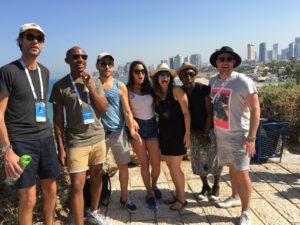 After two nights in Tel Aviv we visited Jaffa, the old port town at the south of the city. Soon we were on a boat up the Mediterranean coast where we learnt about leadership. I was a Moses – a visionary leader who needed the operational support of Jacob and the spirit of Miriam to complete the task at hand. Our leadership was acted out on a raft race on the beach, working together to solve a problem and learning more about others.

After an early start back on the bus we visited a Kibbutz – a shared communal working village and business. It reminded me of an old people’s home or a University dorm with 1960’s decor and fittings. Not for me! On the bus north we drove to the Golan Heights and a spooky afternoon on the border amongst the ruins of an old army barracks. We heard a bomb go off near us on the border which startled the group and set a number of emotional discussions in process.

We enjoyed another divine meal at the Assada winery before a late night bus ride into Jerusalem to the strains of Jewish rapper Matisyahu.

I woke to a Mediterranean breakfast on the deck when a crow settled on the balcony. It had a real Game of Thrones vibe as I prepared for busy day in this spiritual homeland. We shared a song of ‘Lean on Me’ before we entered the Old City. Its limestone walls beaming in the hot desert sun. First stop was the Church of the Holy Sepulchre.

We learned that Jesus had been crucified on the hilltop before being laid to rest and entombed for days before he rose up from the ashes. On to the Western Wall for a look before we were interrupted by a Bar Mitzvah. Another lavish Armenian Feast and we met some local festival and concert promoters. They talked about some of the struggles of getting artists into the region around the Boycott (BDS) movement. 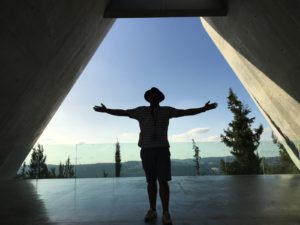 That afternoon we visited Yad Vashem – the $100m Jewish memorial buried deep in the rock. The trees grew including one for Schindler which had grown into two trunks. No cameras allowed as we delved into the depths of the museum, all part of the emotive 2 hour journey. We watched a short video about life pre World War 2, smiling faces dancing in the snow and villages to unique Jewish customs. We learnt about the rise of Nazism and the marginalizing of Jewish life, condemning many to the slums and ghettos. A makeshift ghetto area was terrifying, showing where families starved to death. Finally we were greeted by the Hall of Nations – a humbling monument with 6 million names on record, before finally coming into the sun and views over Jerusalem. The guide told us of the 10 beauties of the world 9 are in Israel. The last is the world itself. It was a moving view onto the green hills below.

It was one of the more moving and confronting days but there was no stopping as we were onto the markets for dinner before strolling through the city to the Tower of David for the Sacred Music Festival – another Schusterman initiative. This was the crux of the trip to have so many music professionals experiencing this event. It was mainly world music artists performing in a majestic historical site. We were encouraged to stay up until sunrise and I made it until about 6.30 before heading home.

Friday was Shabbat and a busy day checking out the old city including the site of the last supper and King David’s Tomb. Every Shabbat is like Christmas – families come together to celebrate the week through gratitude. Candles are lit, bread is broken and wine is consumed. This continues all Saturday til regular life resumes. We celebrated at Western Wall where I left a note for my family. I was able to think of Helen McAlpine on the passing of her death. A Shabbat dinner took place that night where we were able to hear Mrs Schusterman speak about her vision for Reality Music.

It was sad to leave Jerusalem as I felt such a connection to the city. Probably not the first person… but I was not leaving on a camel like thousands before me! On to the Dead Sea, which was around 45 mins drive from Jerusalem towards the Jordanian border. The salty brine was like olive oil – greasy in our hands and stinging cuts and our mouth. The hot sun beat down and I had to skip quickly across the burning sand. Onwards along the lake (sea) front towards majestic Masada – the famous fort on the hill overlooking the Dead Sea. We caught the gondola up to the ancient city where 2,000 Jews committed suicide before Romans stormed it. This was followed by a food truck lunch in the desert before more frolicking in the dunes.

It was a shame not to stay longer at the country’s premier hotel – the Beresheet Hotel – over looking the world’s biggest crater. We didn’t check in until 7pm and at 8pm we were whisked away to the final dinner – out in the crater nonetheless. It was here we experienced a spectacular closing party. Dave one of the more quiet shy guys got up and jammed his song. Illsy sung her hit song ‘Headlights’. I played Romeo and Juliet before Pharrell’s team DJ’d the night away with the latest and greatest hip hop cuts. It was an emotional night as everyone finally bonded and it was a fitting way to cap off a memorable week.

The final day took us back to Tel Aviv via the Gaza border. We learnt about the conflict, the fear the locals live in and the resilient creative community in light of the campaigns against Hamas by the Israeli Defence Force, as recent as summer 2014. Many have 15 seconds to find shelter before rockets may land on their house. The thought was terrifying. The final lunch was cooked by the Israeli Masterchef winner as we the savoured the finest Israeli wine, hummus and roasted veggies. Before lunch I did the haka to the group. It was something I had performed in my break out group and after buzzing them out they encouraged me to man up and teach the group. It was going to be difficult to teach them all so I had them all stomping their feet in time while I did my best Richie McCaw impression. It was a bit sloppy but I gave it 100% and that’s all you can ask for. It was soon on the road to the airport. There were many tears as we said goodbye and capped off a memorable week.

My main outtakes of the trip were my attachment and bewilderment with Jerusalem. An appreciation and understanding of the Holocaust. And a stack of new contacts and inspiration for the industry. Some of my favourite people were a music supervisor Andrew who lives in his car on the Pacific NorthEast coast. Sean the songwriter who writes songs for Demi Lovato. Illsy who performs with Robin Schultz. Managers of Shakira and Pharrell. Scooter Braun’s right hand woman. The New York food bloggers Molly and Lindsay, who had no place being there except being friends with one of the co-ordinators, but added fantastic millennial value to the diverse group. 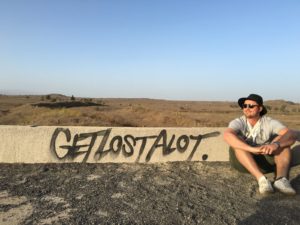 I gathered an appreciation and understanding of the cause of the Middle East conflict and the issues surrounding it. Gaza is a mess with tunnels in and out of the region supplying Hamas with deadly weapons and rockets used to harm the Israelis. The Syrian border protects many in the Golan Heights from the brutal civil war happening just miles away. I only really got one side of the perspective and I look forward to meeting with Palestinians in future and continuing to be part of the debate and conversation around the Middle East conflict.

And finally a love of Tel Aviv. I only really got a taste of this seductive, seaside city. I enjoyed my final day on Dizengoff road shopping and sitting writing my diary. It was hard not to think about the potential for terrorist attack. Over all Israelis were very friendly and outgoing. A lot like antipodeans – well travelled, inquisitive and living for the moment. I would have loved to extend my trip but it was going to be too hard to change my flights. I was soon on the way back to the airport for the long ride home. I had tears in my eyes rereading my diary about the Holocaust museum and time in Jerusalem on the 4 hour flight to Frankfurt. I was laughing about the bus rides shenanigans and late nights out on the 14 hour journey back to Singapore. And I was content and happy heading home to Auckland with a head full of history and a heart full of inspiration, friendship and tokens for my journey ahead. 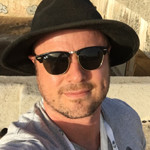 Hamish Pinkham is Director and Founder of Rhythm and Vines – NZ’s premier 3-day music festival and first place in the world to celebrate new year’s eve.

h J R
Shalom.Kiwi @ShalomKiwi RT @Israel_katz: I applaud the German govt for the decision to designate Hezbollah a terror organization. In my conversations with @HeikoMa…

h J R
Shalom.Kiwi @ShalomKiwi RT @arnoldroth: @IDF @USNavyEurope From Jerusalem on #IsraelIndependenceDay, my family gives thanks for the WW2 Alled victory and the liber…