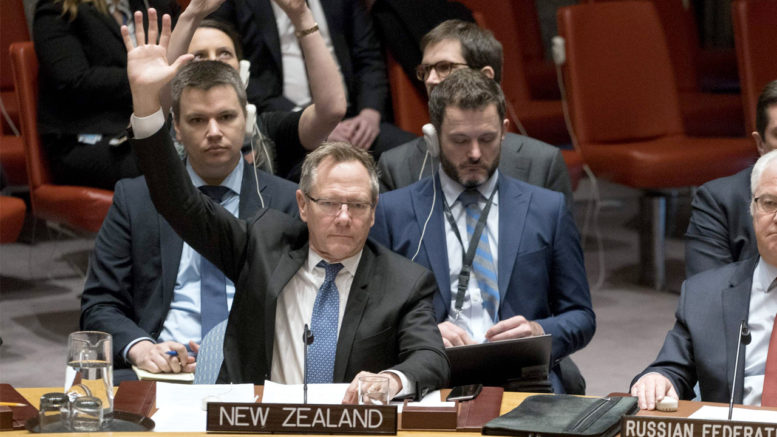 For many New Zealanders the anti-Israel UN Resolution 2334, co-sponsored by New Zealand on the Eve of Christmas 2016, came as a shock. It is one thing for a democratic nation to criticise another democratic nation for its policies. It is quite another to lead the charge on a resolution that was clearly seen, by Israel and many in New Zealand, as stabbing a friend in the back, acting contrary to those countries’ shared values, and nothing but counter-productive virtue-signalling.

It was therefore an eye-opener to hear New Zealand’s Permanent Representative to the United Nations, Ambassador Gerard van Bohemen, reveal, in his 9 March 2017 address to the New Zealand Institute of International Affairs, how hard New Zealand pushed for the resolution and how the UN member states view such resolutions. The ambassador’s ‘view from within’ contained some surprising admissions.

One acknowledgement, that the ‘Middle East Conflict’ in the context of the UN means just the Israeli/Palestinian conflict, was not surprising. It highlights the New Zealand government’s and others’ misguided and naive belief that the Israeli/Palestinian conflict is the root cause of all other conflicts in the Middle East, apparently even the centuries-long hatred between Sunni and Shia. Further, it shows the disproportionate attention that the issue is given, to the detriment and neglect of far more pressing claims and conflicts. The ambassador explained it as one of those issues that is a ‘hardwired consideration of the council’, saying

Every month there’s a debate on the Middle East…Every third month there’s a public debate where it goes into the chamber and Israel and the observer state of Palestine get to say things to each other and to us. It’s one of those items that comes up all the time.”Gerard van Bohemen

This fixation is what US ambassador to the UN, Nikki Haley, called a ‘prejudiced approach’. This ‘hardwiring’ in the form of routinely timetabled debates is an institutionalised bias against Israel. Despite all the ongoing conflicts and catastrophes in the world, no other country or issue gets this treatment. Anti-Israel bias has been called out on numerous occasions, including by former Secretaries General Kofi Anan and Ban Ki Moon and even Minister McCully, yet it seems to continue.

While it is no surprise to many that the UN is anti-Israel, possibly the most insightful admission from van Bohemen was that UN resolutions might not reflect reality, but are political tools to ‘prove a historical case’. The UN doesn’t really care about ‘what’s happening on the ground’, as van Bohemen described:

This would explain why the resolution appeared to have been written in a vacuum, with no regard to the complex history of land now deemed to be “Occupied Palestinian Territory”, including prior UN resolutions, legal instruments and claims.

Van Bohemen referred to a 2016 United Nations Quartet report as grounds for supporting the view that Israeli settlements were the obstacle to peace. However, that same report specifically mentioned Palestinian Authority incitement to violence and Palestinian Authority leaders’ lack of condemnation for terrorist attacks. It also distinguished between the different areas of the West Bank – these aspects of the report were completely ignored in resolution 2334.

Just as the reality of the situation was apparently of little import to the New Zealand delegation, van Bohemen seemed to imply that so too was the language of the resolution. He seemed to be unaware or unconcerned that in UN resolutions, words matter, and there are significant legal implications of such wording:

We came up with a resolution and a tactic that is not normally followed in the UN, especially on this issue. We used language which was not hallowed language. It wasn’t previously negotiated language. We wanted to try and get them to talk about the ideas rather than the words. These words had been negotiated to death for years. We thought, If we could get them to talk about the concept, maybe that would be interesting.”Gerard van Bohemen

This is a striking admission; that a resolution that could provide the basis for boycotts and legal challenges against Israel was seen by the New Zealand delegation as a kind of discussion document – not to be taken at face value, but to get the parties to “talk about the ideas”. This might be the kind of touching philosophy that prevails in the rarefied world of the UN chamber, but such ideas are not connected to reality.

Resolution 2334 has only made each side more intransigent and deepened the chasm between them. There has certainly been no rush to the negotiating table to discuss the ideas behind the wording of it. The words of resolution 2334 and the ideas they represent have been roundly condemned by world leaders and legal experts. As Columbia Law Professor Trevor Norwitz pointed out;

2334 is a very bad resolution: it is lawless, ahistorical, unprincipled, unfair and counterproductive.It is lawless because it purports to state a legal conclusion which it is unqualified to do and which is incorrect. It is ahistorical because it does not describe reality, but adopts a fabricated political narrative…

It is unprincipled because it runs counter to past UN resolutions (not to mention promises by past US administrations) on which all peace-making efforts of the past 25 years have been based.

It is unfair because it is unbalanced, blaming Israel for the failed peace process when it is the Palestinians who for years have refused to negotiate but turned instead to warfare and lawfare (this very resolution being a case in point).

And it is counterproductive because it makes a negotiated peace much more difficult to achieve.

The Security Council baldly declared that “the establishment“ by Israel of settlements in the Palestinian territory occupied since 1967, including East Jerusalem, has no legal validity and constitutes a flagrant violation under international law.”

These allegations are simply wrong as a matter of international law. Fourteen countries acting in their own political interests – or even all 193 UN members – do not have the ability to decide what the law is. The law is the antidote to the mob, not the product of it. For political reasons (or without even knowing what they were doing), these countries decided to declare that rebuilding ancient synagogues in the Jewish Quarter of the Old City of Jerusalem is a war crime. That does not make it one.”Trevor Norwitz

Despite the Government claiming otherwise, the stance that New Zealand has taken in sponsoring the resolution represents a new policy position and puts it out of step with its allies such as the U.K. and Australia, whose leaders have condemned resolution 2334. However, New Zealand’s Prime Minister has remained supportive of it while, after the fact, stating the desire to reinstate a ‘positive relationship’ with Israel, with no obvious action taken to do so.

One can only make assumptions about the motivations of the New Zealand delegation to co-sponsor and vote for such a flawed resolution, but a plausible interpretation is that they did not fully understand or care about its implications. As our Ambassador himself admits, the New Zealand delegation and Minister of Foreign Affairs did not see the words or historical context as important. The key objective appears to have been to achieve a trophy resolution that can be stored “on the shelves” and admired by its proponents, even if it meant ignoring reality and New Zealand’s long-standing position, damaging relations with the only liberal democracy in the Middle East, and worst of all, undermining the peace process.