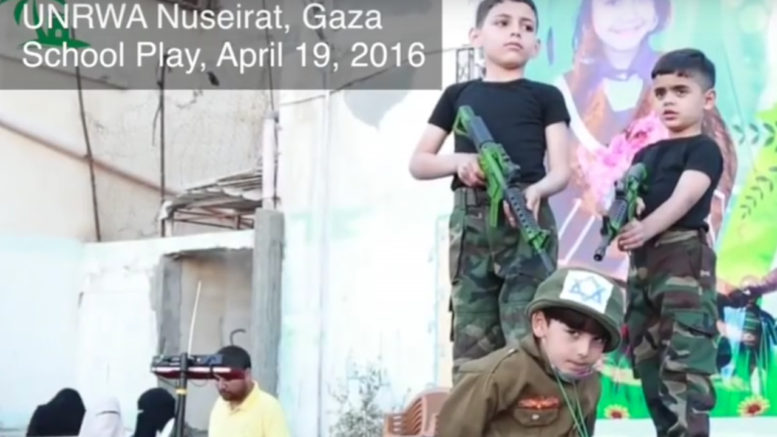 Where we find credible allegations of neutrality violations among our staff, we investigate and where it’s appropriate we take disciplinary action, up to and including dismissal”Chris Gunness

Gunness also took to twitter to attack UN Watch and call the reports “baseless allegation[s]”. However, in late October 2016, United Nations Secretary-General Ban Ki-moon announced that UNRWA employees have “in a number of cases” been subjected to disciplinary action, including suspension and loss of pay. No specific teachers were named and no other details given. Now, even more UNRWA employees have been found to be spreading anti-Semitic material and inciting violence.

The most recent exposé of incitement from UNRWA staff also follows questions around the practices of UNRWA: the inefficiency when compared to UNHCR, its treatment of refugees, the UNRWA school curriculum, policies around granted loans, and their role as an obstacle to peace. The incitement to violence by UNRWA employees constitutes a violation of their legal obligations on at least five counts and has been linked to the “stabbing intifada” that began in September 2015.

The recommendations of the report are that all donor states:

(a) Demand that UNRWA be in full compliance with its obligations, including each of the provisions outlined above, prior to donor states releasing any further funds to UNRWA;

(b) Demand that UN Secretary-General António Guterres and UNRWA Commissioner-General Pierre Krähenbühl immediately condemn their employees’ incitement to terrorism and antisemitism; and

(c) Demand that UNRWA adopt a zero tolerance policy for employees who incite racism or murder by immediately terminating their employment, and prominently post on its website these and other actions it is taking to root out this insidious conduct by UN staff.

Over the past seven years, New Zealand has contributed $6.3m to UNRWA and not once publically spoken out against such practices. In fact, New Zealand has praised UNRWA’s work on the occasion of its 65th anniversary in 2015, but there has been no public criticism of UNRWA in light of any of the UNRWA staff incitement. Foreign Minister Murray McCully did say that he was aware of concerning behaviour when he was interviewed in May, 2016:

“UNRWA certainly deserves criticism and the example that particularly sticks in my mind is the occasion where some rockets were found in a school and rather than confiscate them and make sure they were in a position where the could no longer do any harm, they were handed back to people who could do harm with them. On one of my visits around that time to Jerusalem, I met with the UNRWA leadership … I can assure you there is not any element of doubt in their minds about the views of the New Zealand government and the funding that has been provided … has been put at risk as a result of their actions. We’ve discussed that quite frankly and will do so if there are further examples.”Murray McCully

New Zealand continues to fund UNRWA to the tune of approximately $1m annually. There has been no comment about the recently uncovered actions of UNRWA staff from any government official and none have responded to Shalom.Kiwi for comment. It’s time New Zealand spoke up about UNRWA’s support for terrorism and anti-Semitism and reconsiders its core-funding commitments.