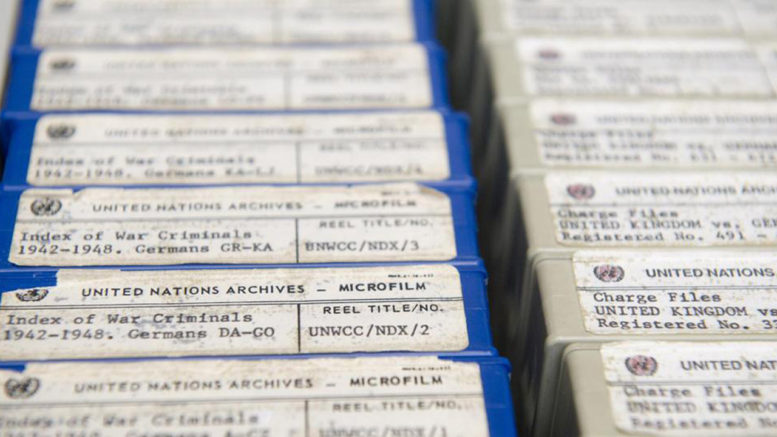 Tonight marks the start of Yom HaShoah Ve-Hagevurah, which literally translates as ‘Day of the Holocaust and the Heroism’. It falls on the day in the Hebrew calendar (27 Nissan) when the Warsaw Ghetto Uprising began. Yom HaShoah serves as a memorial of those who died during the Holocaust, giving families time to reflect on the lives lost and educate future generations against anti-semitism.

This week, the Wiener Library in London publicly released an archive of documents from the UN War Crimes Commission dating as far back as 1943 – allowing for a more accurate account of history to be taught and educating us all about a part of history that some wanted erased.

These newly accessible documents, closely guarded by the UN from the time the Commission was shut down in the late 1940s until now, include evidence of Nazi war crimes committed during the Holocaust and, according to Dan Plesch, director of the Centre for International Studies and Diplomacy at the University of London,

“[The archive] is a huge resource for combating Holocaust denial… The German national authorities were never given access to the archive by the allies after the war. All of this has never seen the light of day.”Dan Plesch

As well as documenting efforts Allied governments made to treat rape and sexual violence as war crimes, the evidence also shows that Allied governments were aware as early as December 1942 that the Nazi regime had murdered at least 2 million Jews.

According to Plesch, the evidence suggests that more could have been done at that point to rescue Jews from the Nazis by using escape routes through France and the Balkans — parts of Europe that were not yet under Nazi control.

“You can’t say that people didn’t know,” Plesch said. “They did know and still didn’t act.” And once the war was over, he added, “there was a great deal more evidence and a great deal more that could have been done to prosecute than was done.”

According to Plesch, anti-Semitic forces within the U.S. State Department at the time pushed back against the efforts of Herbert Pell, the U.S. envoy to the War Crimes Commission. During the Cold War, Senator Joseph McCarthy lobbied to end the war crimes trials altogether, and many convicted Nazis were granted early release. As Plesch explains, “The commission’s files contained indictments against thousands of Nazis who were then allowed to go free”. The archive, Plesch says

“completely changes how we thought the Allies responded to the Holocaust. We now know that part of the Allied governments in London…in fact brought criminal indictments against Hitler and his henchmen while the war was still going on.”Dan Plesch

Current world leaders, Plesch argued, could learn from the commission’s example when faced with evidence of the war crimes being committed in the Middle East today. As for historians, journalists and the general public, the post-war cover-up of the commission’s efforts offers a lesson of history we shouldn’t forget. “Once upon a time,” Plesch said, “There were people not only suppressing war crime trials but convincing the world they never even existed.”