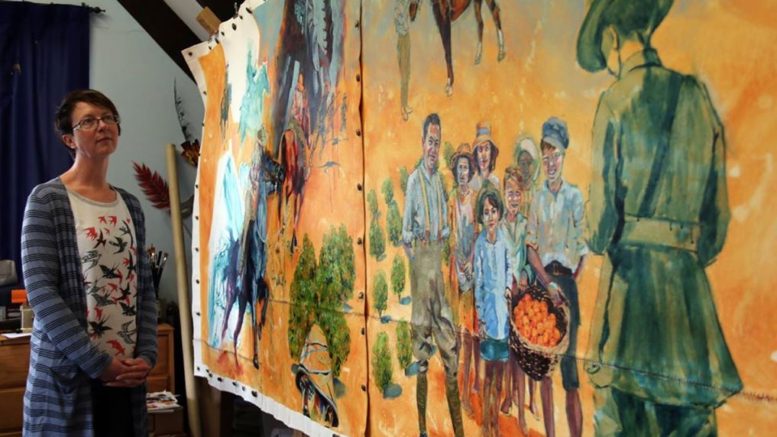 Wellington artist Rebecca Holden will be exhibiting her WWI commemorative show Sand in the Apricot Jam at the Museum of Rishon LeZion, Israel, later this year. The exhibition features large-scale painted works representing the New Zealand Mounted Rifles of WWI. Rebecca has created a new painting to be exhibited for the first time in Israel along with 3 of the 4 existing works that form Sand in the Apricot Jam. The exhibition will be open for six months from 19 October.

This is a unique opportunity, during this WWI centenary period, to honour the men (and their horses) of the NZ Mounted Rifles (NZMR) in the land in which they fought. Sand in the Apricot Jam reflects the contribution of the NZMR in the Middle East Campaigns of Sinai and Palestine of the First World War.

Rebecca’s grandfather John (Jack) Culleton was a trooper with the 4th Waikato Squadron of the Auckland Mounted Rifles Regiment and left with the Expeditionary Forces in 1914. He served with the NZMR at Gallipoli and in the Middle East until 1919 when he was discharged due to malaria. Rebecca’s personal connection was the catalyst for the creating this body of work.

The NZMR fought predominantly against the Ottoman Turkish Army in this campaign. The horsemen of the NZMR were invaluable in the desert campaigns because they covered greater distances on horseback (than foot infantry).

Sand in the Apricot Jam has toured NZ since its first showing at Expressions Whirinaki, Upper Hutt in 2014, where Rebecca was Artist in Residence. It was exhibited at the National Army Museum, Waiouru in 2016, and the Waikato Museum from March to June 2017.

Exhibiting Sand in the Apricot Jam during this year’s centenary of the battles of Beershaba and Ayun Kara reinforces the historical connection between New Zealand and Rishon LeZion. The NZMR received a warm reception by the Jewish inhabitants of Rishon LeZion when they liberated the village from the Ottoman Turkish army after the Battle of Ayun Kara. The NZMR returned to camp there on numerous occasions after this event.

The centenary of the Battle of Beersheba on 31 Oct will be honoured by New Zealand and Australia with a commemoration ceremony at Beersheba. The Battle of Ayun Kara took place on 14 Nov 1917, near Rishon LeZion, and was one of the most significant battles in which the NZMR fought in the Palestine Campaign. The Mounted Rifles lost 50 men in this battle and these losses are represented in the new work by 50 WWI NZ Forces buttons sewn onto the painting’s canvas ground.