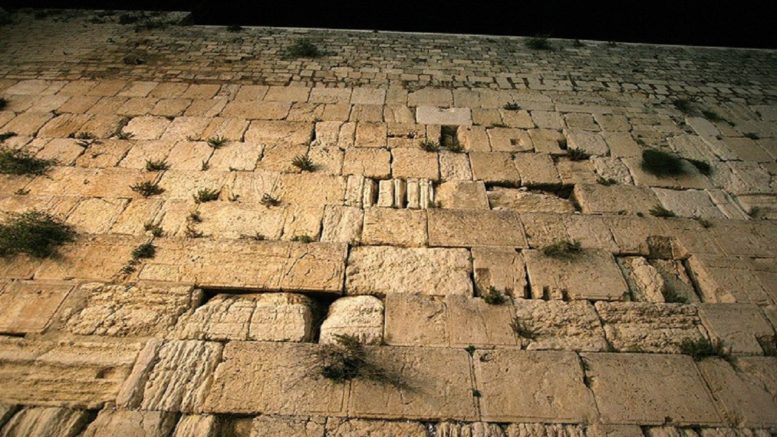 Tonight marks the start of Yom Yerushalayim (Jerusalem Day), commemorating Jerusalem’s reunification in 1967 when it was acquired in a defensive war in 1967 from Jordan. Jerusalem today has a rich culture which reflects its history – as captured by Ilan Wittenberg.

That history is portrayed differently by different groups today so, in honour of Yom Yerushalayim, we present a depiction of Jerusalem from the early 19th century. A man named George Robinson travelled in then Palestine and Syria in 1830, with his book Travels in Palestine and Syria being published in 1837.

It is a fascinating look at the Holy Land and its residents back then – 30 years before Theodor Herzl was even born and at a time when the land was ruled by the Ottoman Empire. Part of the book deals with Robinson’s description of Jerusalem.

On pages 116-117, Robinson describes Jerusalem as a practical ghost town and “expiring city.” Note how he also refers to the “Musselmen”, the term used for the Muslims (not “Palestinians,” a term invented much, much later).

The public buildings are not numerous, and excepting those consecrated to religious worship, there are none worthy of notice. We visited the baths, situated in the Turkish quarter, but we found them greatly inferior to similar establishments in other parts of the East. The Bazaar, or street of shops, is arched over, dark and gloomy, the shops paltry, and the merchandize exposed for sale, of an inferior quality. Ths is the only part of Jerusalem where any signs of life are shown. But even here, round the heard, (for it is situated in the centre), the pulsations of the expiring city, are faint, and almost imperceptible; its extremities are already cold and lifeless. In the other quarters of the town, you may walk about a whole day without meeting a human creature…

I am inclined to believe that the fixed residents do not exceed twelve thousand, if even so many. Of these, perhaps two-thirds are Mussulmen. Of the other third, two-thousand five hundred are Jews.George Robinson

On page 118 he describes the Jewish quarter, which is referred to by its Muslim name Harat-el-Yahoud, and refers to the site of the ancient temple.

The Mussulman portion, as in all sacred cities, are distinguished for their intolerance and fanaticism, and on this account the traveller should be on his guard, and respect their prejudices.

Decidedly the most interesting population of Jerusalem is that of the Jews themselves. Here, as in all other Eastern towns, they are confined to a particular quarter. The part they occupy in Jerusalem is the hollow space lying between the site of the ancient temple, and that part of Mount Zion which is included within the walls. It is called Harat-el-Yahoud.George Robinson

On page 120, like other authors have done, he speaks of the Jews’ devotion to their land.

Would that it may be so, for there is something peculiarly affecting in the sight of this devoted race, living as strangers and slaves in the land of which they are the rightful owners; and he must have a cold heart indeed that can look on, and no sympathise with their suffering.George Robinson

While on page 122, he describes the scene of Jews praying at the Western Wall.

I was moved almost to tear, by seeing just outside the great mosque, which stands on the site of their ancient temple, four or five Jews, apparently rabbis, with books in their hands, in the attitude of prayer, and their faces directed towards the wall. I fancied I heard them saying, “How long, O Lord, how long shall we be the objects of thy just anger?”George Robinson

This post has been adapted from that of Israellycool.