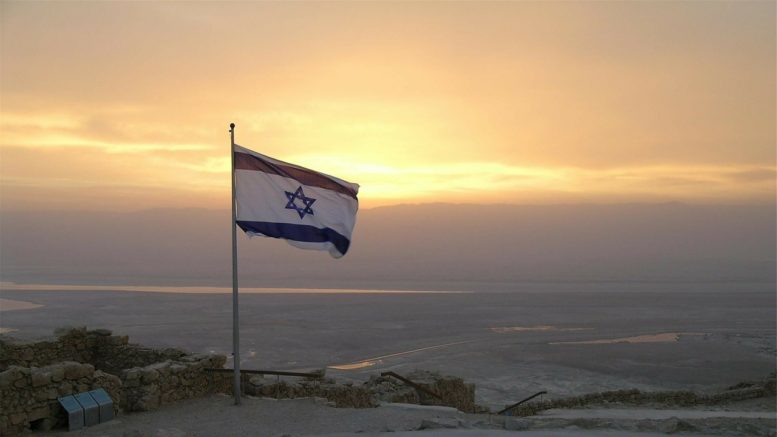 Recent events in NZ and abroad in the last month or so have got me wondering about where there is a safe space for Jews.

In June, three people were thrown out of the Chicago “Dyke March”. Their sin? They were wanting to celebrate both their queer identity and Jewish identity, and were wielding rainbow flags emblazoned with Stars of David. The Star of David of course is the primary symbol of the Jewish people, as the Nazis were well aware. According to the parade organisers, the flags made people feel ‘unsafe’.

Within the same week, hundreds of protesters marched through London to celebrate Al Quds Day (the Iran-instigated anti-Israel day), brandishing Hezbollah flags, a terrorist organisation committed to the destruction of Israel and the death of Jews. So rainbow flags with Stars of David were removed from the streets of Chicago while Hezbollah flags were proudly marched through London.

Are we at the point (again) where a Star of David is a badge of dishonour, a stigma, a symbol that evokes hatred and bigotry?

To be fair to the organisers of the Dyke March, their statement afterwards asserted that Jews were welcome, so long as they were anti-Zionist. They claimed that when they pressed the flag bearers for their views on Zionism, they expressed support for it, which clearly was intolerable. Despite the fact that Israel is the one state in the Middle East where gays can be free and proud to identify as such, the organisers stated that “in movements for justice and liberation there is no room for Zionism of any kind”, because it is a “white supremacist ideology”.

Zionism is no such thing. It is nothing more and nothing less than support for the existence of the Jewish homeland in the place where the Jewish people are indigenous. It is colour blind. About half of Israel’s Jews are Mizrachi, meaning they descend from Jews in the Middle East (such as Yemen and Iraq) and Central Asia. There are over 100,000 Ethiopian Jews in Israel. Two Druze Israeli policemen were just murdered by terrorists for the crime of defending their country. There are over 1.5 million Arab citizens of Israel – that’s about 20% of the population.

Back in March, a day ahead of the International Women’s Strike, Emily Shire wrote a New York Times op-ed entitled “Does Feminism have Room for Zionists?” Linda Sarsour, the American-Palestinian ‘it girl’ of the oppressed, who helped organise the strike, has given us the answer. She recently stated that feminism is incompatible with Zionism, although apparently she sees no such issues with sharia law, which she advocates, nor is worried by the detail that women have equal rights in Israel and nowhere else in the Middle East. This is yet another Orwellian example of people who purport to be progressive using selective outrage and a misconception of Zionism to justify their discrimination against Jews.

Jews are increasingly subjected to a selection process – when they are examined by self-appointed ideological guards and divided into “good Jew” and “bad Jew” depending on their political views. A highly publicised stark example of this back in 2015 occurred when the Jewish American performer Matisyahu was excluded from a Spanish music festival because he refused to sign a statement supporting a Palestinian state. No other performers were asked to state any political views.

Are we at the point where Jews are put on trial for their views and the only “good Jews”, the only ones who are allowed, are the tiny minority who disavow support for the state of Israel?

Then there are those performers who have the temerity to visit Israel. This last month also saw the UK band Radiohead excoriated by Roger Waters and his miserable mates for playing in Tel Aviv, and crossing their “picket line”. One could well ask who gave Waters the authority to impose a picket line and Radiohead’s lead singer Thom Yorke did. He outrageously suggested that they were well informed on the subject and could make up their own minds. In reply to the filmmaker Ken Loach’s article in the Independent, Yorke said:

We don’t endorse Netanyahu any more than Trump, but we still play in America. Music, art and academia is about crossing borders, not building them, about open minds not closed ones, about shared humanity, dialogue and freedom.”Thom Yorke

Never one to let a fun trend pass us by in little New Zealand, June also saw Raybon Kan virtue-signalling in the NZ Herald, the biggest circulation newspaper in the country, about “the ethics of watching Wonder Woman”. Played by the magnificent Gal Gadot, Kan, self-described as an award winning stand-up comedian,  noted that Gadot is a former Israeli soldier who had apparently expressed support for settlements, and that NZ is against settlements, and unfunnily pontificated on whether he should therefore boycott the movie. I have been unable to find anything that states Gadot’s views on settlements – but when have Israel’s critics ever let facts get in the way of a good story?  On the other hand it is well reported that Gadot did publicly express her support for her homeland in its war against Hamas, another terrorist organisation dedicated to the eradication of Jews, in 2014. If Kan had boycotted the movie, he would have been aligned with such progressive bastions of human rights as Lebanon, Algeria, Tunisia and Qatar, and of course, brought peace with the Palestinians that much closer.  Before we see Kan’s award-winning stand-up comedy should we find out about his views on the Chinese occupation of Tibet?  And should we find out every American actor’s political views before deciding whether to see a movie?

In case you haven’t seen it, the movie is fantastic. It’s hard not to feel a little emotional imagining how history may have unfolded differently had a Jewish heroine vanquished the Germans in World War 1.

Speaking of history reimagined, another hot trend to arrive on New Zealand’s shores in June is de-Judaization, as previously reported in Shalom.Kiwi. This is the campaign, sponsored by UNESCO, to remove Jews from their own history in, and connection to, the land of Israel. Back in June we heard that the Artsplash festival for children, based in Wellington, had changed the words in lyrics from Joseph and the Amazing Technicolor Dreamcoat, the musical about the biblical story of Joseph. The line “Children of Israel” was changed to “Children of Kindness” by the organiser and then, when told by Sir Tim Rice that she did not have permission to make the changes, she culled the song. “It’s not worth looking for trouble”, she declaimed.  “We always look to have music that covers and looks after kids from all countries, from all backgrounds.” That would be, it seems, except for the kids of Israel, oops, I mean Kindess, and of Jewish background, who are to be elbowed out of the hallowed halls of diversity to make room for others.

Are we at the point where a reference to the “children of Israel” in a song at a children’s festival is looking for trouble and must be removed?

So here we are. Those pesky Jews are causing trouble, offence and danger wherever you look – in gay parades, movies, and songs, in New Zealand and overseas. They refuse to go quietly, so we will exclude them, boycott them, expunge them. The space for them in intersectionality, in diversity, in the arts, in history, is shrinking, to make a safe space for others. Some might say these problems only arise because the Jews insist on reclaiming, and trying to keep safe, their own space in a tiny sliver of land in the Middle East, but I say thank G-d we do.