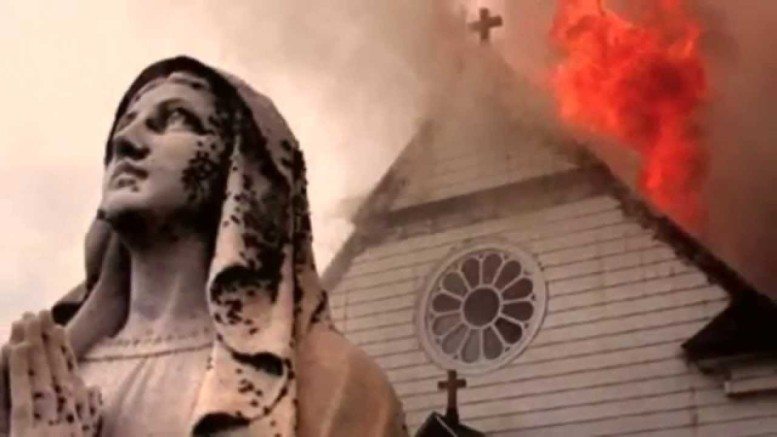 In the aftermath of the Holocaust, humanity struggled to comprehend the enormity of six million Jews murdered by the Nazis. A simple two word phrase was coined, which summarised the determination to avoid the repeat of such genocides: ’Never again’.

When we consider the events of the Middle East, we are witnessing a slaughter that is largely unreported or under-reported and one that deserves attention if the words ‘Never again’ are to have meaning.

The Archbishop of Canterbury used his Christmas Day sermon to lament the fate of Christians in the Middle East, suggesting they face elimination. The Archbishop focussed on Iraq and Syria, where Islamic State has killed or expelled thousands of Christians or forced their conversion to Islam.

Christians are now being slaughtered at a rate of one every 5 minutes and driven out of their homes and lands like the Jews were half a century ago. Such persecution pre-dates the Islamic State. In 2010 Khaled Abu Toameh wrote “It is obvious by now that the Christians in the Middle East are an ‘endangered species’.” It seems now, 5 years on, that level should be upgraded to ‘critically endangered’.

It is not only the Christians. There are a number of other minority groups in the region. On Christmas, the actress Susan Sarandon wrote of meeting a Yazidi (an ethnic-religious group facing ethnic cleansing) family of refugees on the island of Lesbos:

The woman said she is too tired to walk anymore and that her child has a fever. She tells me they spent a month in Turkey, living on the street. They are Yazidi from Sinjar in northern Iraq. Sinjar is the site of a huge massacre, where ISIS executed 5000 Yazidis for their religious beliefs. They are not Muslim. Thousands of women became sex­ slaves of ISIS. Basically, ISIS is committing genocide.”Susan Sarandon

It’s also not only in Iraq and Syria. Bahai people face systematic persecution in Iran; 13 of the 17 Middle East countries were in the World Watch List of 50 places where Christians face the greatest persecution.

The Palestinian Territories came in at 26 and were rated areas of “moderate persecution”. Since Hamas overtook Gaza, it has become increasingly difficult for the 2,000 or so Christians to practise their faith in safety and in the Christmas just passed, “limited celebrations” of Christmas were imposed by the Palestinian Authority.

Despite death penalties for celebrating Christmas, thousands of people from countries like Saudi Arabia, Iraq, Iran, and Pakistan posted pictures on social media to raise awareness of Christian persecution in the Middle East. While Christians in these Middle Eastern countries risked their lives to make a point about freedom of religion by participating in the traditional Christian festival, New Zealand’s race relations conciliator suggested that New Zealanders refrain from using the traditional ‘Merry Christmas’ greeting, so as not to make ethnic minorities in New Zealand feel uncomfortable.

The only country in the Middle East where Christians are totally free to practise their religion is Israel. The 2% of Israel’s population who are Christian enjoyed festivities in Nazareth, Jerusalem, Haifa, Tel Aviv, and even within the Israeli Defence Force.

Outside the Middle East, Christians have been forbidden from public celebrations in Somalia, Tajikstan, and Brunei. These are atrocities and injustices that, as Rabbi Ephriam Mervis said, “we simply cannot countenance”.

The Muslim persecution of minorities reached the point that the U.S. Holocaust Museum used the word “genocide” to describe the “widespread, systematic, and deliberate campaign of ethnic cleansing” of Yazidis, Christians, Turkmen, Shabak and other minority groups by Islamic State. This is the first time the Museum has used the term since the 2004 Darfur violence.

The threat to minority groups in the Middle East is something we cannot and should not ignore. The question is: what can we do to ensure “never again” are not just hollow words?

Various groups and religious leaders have suggested New Zealand prioritise Christians in our newly increased refugee quota as they are most in need and require special protection. This is problematic as we are likely to follow the U.S. State Department and accept refugees primarily from lists prepared by the Office of the U.N. High Commissioner on Refugees. This group oversees the large camps to which refugees have fled, but do not include Christians. Endangered Christians do not dare enter those camps. Some have dared to join illegal boats fleeing for Europe but were killed en-route.

Despite the issues, Australia has taken a leading role in focussing on the minority groups most at risk and most in need within their refugee programme, just as they prioritise skilled people for their normal immigration.

Another possible avenue for New Zealand to pursue would be to use diplomacy to pressure governmental action within those countries where minorities are at risk. While we have a seat at the UN Security Council, New Zealand is still a small nation and, despite raising human rights issues with Saudi Arabia, we are unlikely to effect change alone. However, New Zealand could draw international attention to this issue by raising its voice at the UN.

At an individual level, we can help dissidents in closed societies through such platforms as Movements.org or sponsor those in need. Raising awareness and drawing media attention to these issues might pressure our government to present these matters at diplomatic meetings.

In order that “never again” not be hollow words, we must do something. At least we should speak out; to rephrase Martin Niemöller’s famous quote of the Nazis

First they came for the Jews, and I did not speak out—

Because I was not a Jew.

Then they came for the Yazidis, and I did not speak out—

Because I was not a Yazidi.

Then they came for the Christians in the Middle East, and I did not speak out—

Because I was not a Christian in the Middle East.

Then they came for me—and there was no one left to speak for me.”