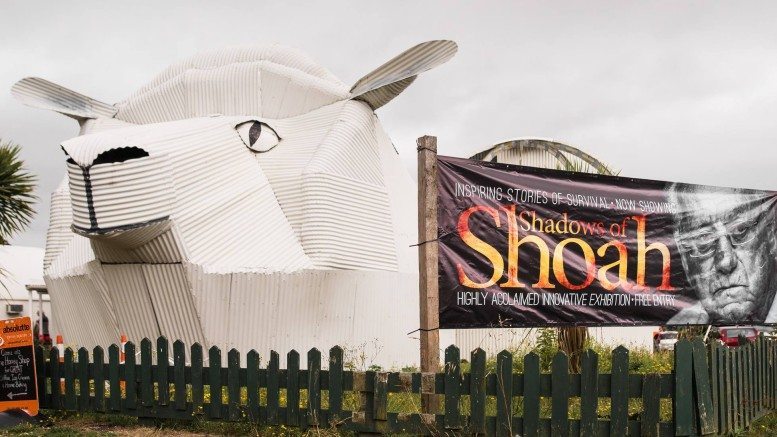 A United Nations International Holocaust Remembrance Day (UNIHRD) event was held this week in the tiny New Zealand South Waikato town of Tirau, (population 690). Over 120 people attended the event, filling the local (and only) church in town, Tirau Cooperating Church, a combined Presbyterian and Anglican Church.

Although a small town, Tirau’s central location and unique variety of shops, cafes and restaurants make it a favourite stopping place for travellers. When Shadows of Shoah founder Perry Trotter enquired about staging the Shadows of Shoah Exhibition in Tirau over the summer holiday period the response from the local pastor was a most welcome surprise.

It transpired that local pastor Rev. John V Rush was an American with a deep interest and background in Holocaust education. Prior to coming to Tirau, John and his wife Shari served on the faculty of LCC International University in Lithuania where he taught history, sociology and anthropology to bright young psychology and business majors from Europe, the former Soviet Union, and Central Asia. With ethnic, racial and religious tensions in abundance in the European setting, John had received specialized instruction for teacher-trainers of Holocaust Education funded by the Task Force for International Cooperation on Holocaust Education, Remembrance, and Research and the United States Department of State.

Shadows of Shoah worked with the Tirau Church to stage an evening of inspiring speeches interspersed with survivor stories to mark UNIHRD.

The evening began with the poignant reflections of Dr Michele Schoenberger-Orgad who spoke of her own family’s connection to the Holocaust. Married to Holocaust survivor Moshe Orgad and daughter of Ergon Schoenberger whose diary is kept at the Auckland Museum, Schoenberger-Orgad spoke of the shadow cast over her family by the Shoah. She also spoke about the hope which resonated in the names of a new generation of Jews born after the shoah: Tikvah, hope; Simcha, rejoicing; Ori, light; Geulah, redemption; Dror, freedom.

Professor Dov Bing spoke about the Holocaust Denial movement which started on fringes of society, moved into the universities, and ultimately contributed to the foreign policy of Iran. 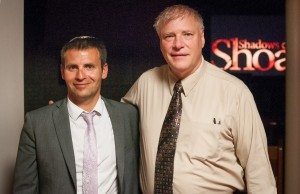 Rabbi Natti Friedler of Auckland Hebrew Congregation delighted the audience with an explanation of the Hebrew word Tirau, which is found in the Torah, meaning to fear God. Deut 13:5 ‘Ha Shem shall you follow and Him shall you fear and to Him you shall cleave’. This was to be achieved by ‘doing acts of loving kindness’.

Rev. John V Rush followed with an erudite overview of the fruit of Western ‘civilisation’. ‘Hitler’s mad obsession to purify the Aryan race was the crescendo of our modern loss of spiritual virtue. The unspeakable 20th century outcomes of our xenophobia, ideology and science are our history exhibits’.

The Mayor of South Waikato District, Neil Sinclair reiterated the importance of learning from history with these words, ‘The Church today has to recognise that part of faith is that we say, this is where we stand…. We won’t allow this to take place. We won’t let it happen’.

Perry Trotter spoke of the alarming rise in anti-Semitism in Europe in recent times. He referred to a recent machete attack in Marseille against a Torah teacher and the response by the leader of the Jewish community encouraging Jews to refrain from wearing Yarmulkes ‘during this difficult period’.

Trotter referred to the ‘Wear-A-Kippah’ campaign launched by his friend Tomas Sandell, founder of the European Coalition for Israel, in order to raise awareness of the threat facing the Jews of Europe. Sandell stated,

Standing in solidarity with the Jewish people was the theme of the evening. Bringing together Jewish and Christian leaders in a Christian place of worship underlined this message. The audience was presented with much to ponder.