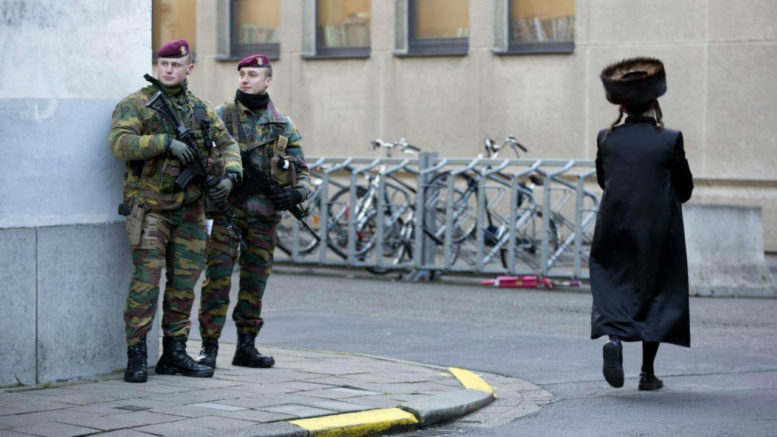 Imagine you have a thriving business, a beautiful home in a photogenic European capital, your kids are in a great school, your partner has a stable and well-paid job. Your favourite restaurants and shops are around the corner. Your friends and family are here. Things are good financially, socially and educationally.

But then, one day, you extricate your kids from their high-achieving school, you leave your business to others to run, your partner throws in a good job and you head for a country 20,000 km away, where a different language is spoken and where you know virtually nobody.

Such a situation is a reality for a small, but potentially growing, number of European Jews arriving in New Zealand.

The rise in anti-Semitism in Europe has been widely reported, particularly after deadly attacks on Jewish sites in Paris and Copenhagen in 2015 and Brussels in 2014. Thousands of European Jews have left for Israel and America – 40,000 French Jews have emigrated since 2006. Recent figures suggest that emigration to Israel from Western Europe is at all time high. But it was not until very recently that this trend was felt in New Zealand.

Late last year Yael immigrated to New Zealand from Amsterdam. I spoke to her about why she and her family made the change that they did.

Why did you leave your comfortable lives in Amsterdam? What made you decide to leave?

The tipping point was about two and a half years ago, in the aftermath of the operation in Gaza. Everywhere around the world there were lots of protests. It hit really close to home in our neighbourhood. A couple of Jewish people were harassed in their homes just for being Jewish and we were having a discussion whether to take down our mezuzah or not. We kind of looked at each other and said, “if we’re actually having this conversation, maybe it’s just time to look for a different place to build a future for our children”. It wasn’t so much for us, but we have two very clearly Jewish, half Israeli children and I didn’t want them growing up in a place where they had to hide (or I felt they had to hide) their background. Where I felt they were walking around with a bullseye on their back.

When you say that you had some neighbours that were harassed , what happened?

We lived in a neighbourhood that used to be a Jewish neighbourhood. My kids went to the Anne Frank school – Anne Frank’s house was around the corner. There are still some Jews living there, some religious Jewish families, so they are very recognisable in their appearance when they’re out in the street. At the same time there are a lot of Moroccan and Turkish people that have moved in over the past years, which makes it a very lovely and colourful, diverse neighbourhood, but there were a few families that were threatened; things thrown at their windows, anti-Semitic slurs shouted at them, just for being Jewish. [On one occasion a Jewish family] ran inside, held the doors closed, but they [the attackers] tried to break down the door, break the windows.

We’d had a couple of incidents like that when people put Israeli flags up, but this was the point when anti-Zionist or anti-Israel sentiment became completely blended with anti-Semitic sentiments and there was actually no difference.

We sent our kids to a public school, so on Sunday we sent them to Sunday school – the term for that is “Jewish Lessons”. It came to the point where I said to my son, “ok let’s not call it that, let’s give it a nickname”. But that’s not how I want to live my life, and it’s not the Amsterdam I grew up in.

How widespread do you think those attitudes about Jews are?

I think extremist attitudes or opinions are rare. There are few people who would do anyone else harm or who really wish them ill. However, there is a big cultural element of people being raised with a dislike of Jews and Israel. That’s just a cultural thing that kids are brought up with. I remember interning at a preschool one day and a four year old boy [of Moroccan origin] asked me if I was Jewish. I said “Yeah”. He said, “Oh, I hate all Jews”. I said, “but have you met all of them?”. He’s like, “ah no”.

There are high schools in Holland that have stopped teaching about the Holocaust because they couldn’t control the classes anymore. But it wasn’t [previously] like that in Holland.

Is there any recognition of what the Jewish community is going through from outside, it or is that just too uncomfortable for people to address?

I feel it’s just too uncomfortable. A lot of people have no idea. I try to explain to people, “when you drop off your kids for soccer practice, I drop them at the synagogue. The difference is there are two fully armed military guys standing outside [the synagogue]. Aside from the building being completely secured like Fort Knox, there is a little police house built across the street for continuous surveillance and there are two military dudes with automatic machine guns standing in front of the door – because I want to drop off my kids at the synagogue for two hours”. I try to explain that and people are shocked by that. It’s just not in their world, not in their reality.

At the same time I feel like the Dutch have this tall poppy syndrome as well, so I kind of feel that a lot of people think, “Oh, you’re just getting too much attention, you’re bringing it upon yourselves”. So I feel there is very little support there, no sense of urgency. Because we like to pretend it’s all great. This is not exclusive to Jews; Jews are just one of the the first ones to get attacked.

[Recently] there were several incidents in which gay couples got beaten – like the sh*t out of them.  These were simply people walking down the street or going to the supermarket that got attacked for holding hands or -last week- for doing a little dance in a supermarket aisle. To think that Amsterdam, which has for many years been known as one of the (if not the top) most gay-friendly cities in the world… and so basically we’re not that special. We’re just one of the first.

No, and worse than that and it feels like people formulate opinions without actually knowing the facts. It is too far away from their day to day life to actually go out and find the facts. So they accept what’s being fed to them. So I kind of feel that there’s to a certain extent this sentiment of, “you’re bringing this on yourself.”

So is it blaming the Jews for any perceived wrongs on the part of Israel?

I don’t know if it’s blaming. I kind of feel like they use it to justify looking away and not doing anything. They think, “yeah but you’re doing this to the Palestinians, so yeah what do you expect”. It’s kind of that sentiment. It’s not great.

How many generations does your family go back in Holland?

Both my parents were born in Holland and two of my grandparents were born in Holland. My German and Polish grandparents survived Auschwitz and my Dutch grandparents went into hiding. My Dutch grandfather is still alive and he was actually my thermometer, because about two to three years ago I went to him and I said, “listen, we’re starting to think about leaving”. I thought he would tell me, “this is nothing like then, don’t be so ridiculous”. But he said, “Go now. If I were younger I would go with you.” And that really freaked me out. He’s very worried about where this is going.

How do you see the future for Jews in Europe?

Growing up Jewish in Europe, I never realised how f*cked up by the war we are. As a second/third generation, we had all these weird things that I didn’t realise people don’t have who don’t grow up in that environment. Like always having cash around, just in case you need to leave. And always having a back up plan. Everyone has a plan, like, “If I need to leave, I’m going to go there…”.

I was surprised when I started telling people we were leaving and the actual reasons for it, how much resistance there was, especially from Jewish families, like, “oh no, it won’t get that bad.” There’s still this denial. And I hope they are right and I am wrong and then, worst case scenario, we live in the most beautiful country on the planet [New Zealand] and we will be fine. But if I’m honest I don’t think that will happen. I think Amsterdam – it sounds so negative – but Amsterdam is logically next. Brussels, Paris… I am just so scared for the city of Amsterdam, but something is going to happen in the Netherlands, something big. I think Jews are going to wake up to this and you are going to see what you see in France now, in a big exodus. I think a lot will go to Israel, a lot will go to the States – you will start seeing people leave. I think anti-Semitic and anti-Israel sentiment will become even more mainstream, more accepted. I don’t know. I don’t think they [Jews] will stay there and if they do, I don’t think they should.

Why did you choose New Zealand, of all places, to go?

We said from the beginning that we don’t want to run away. So I want to go now, while I have the choice and can look at “soft” things, like the weather, the general things that are not first life needs. But if you’re going to be doing this you may as well move to a place that has nicer weather … and it’s just so beautiful. We also looked at the Jewish community; I wanted a place that has an active Jewish community that our kids can be part of, especially being so far away from your family and everyone you know, I think it’s important to have that.

I wanted a city big enough that it had everything where you could build a life. So we made a list, travelled around a bit but literally, even the first that day we landed here, we found love. It was funny because our hotel was around the corner from here and we were so jetlagged, we were wandering around and we found a park and the kids were playing in the playground and we were lying there and we were thinking, “Oh my god. I know we’ve only been here for half a day but this is it”.